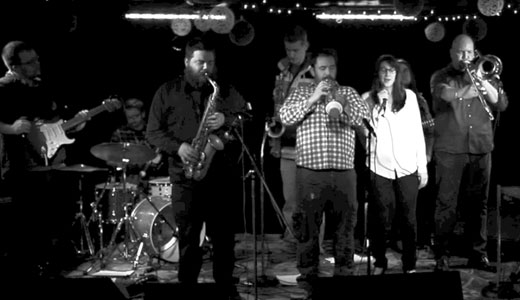 D’Arkestra is certainly one of our city’s finest, a group whose nine members come together to deliver an unforgettable experience. An ethereal debut, Ghost Town, surfaced in 2012; now, they are on the cusp of releasing their sophomore album, Little Voices, on March 25, with a release show following at Dreamland on March 30. LEO sat down with saxophonist Drew Miller to get the scoop.

LEO: How did the band begin?

Drew Miller: I was moved to begin writing more and to pursue more meaningful musical goals after a melanoma diagnosis, which was (in) late 2008. I didn’t start writing for what would become D’Arkestra until (my previous band) Lucky Pineapple was on its way out in 2011. So there was a good chunk of time between that. That time was spent kind of searching and experimenting. Lucky Pineapple really turned me on to pursuing a large ensemble. Later on, I found all the other musicians involved in the group through playing various gigs.

LEO: Would you say D’Arkestra is more a jazz or rock band?

DM: It has the jazz influence to it. It employs the freedom and rhythmic instrumentation of jazz — but the feel of the songs is rock and punk. Some songs have a hip-hop groove.

LEO: Describe how the band sounds.

DM: Our guitarist, Brandon Coleman, jokingly called us “post-rock large ensemble.” I like to call it “indie jazz chamber music.”

LEO: Do individual members write songs, or is it purely collaborative?

DM: Brandon and (bassist) Nick Kuypers worked on some compositions. For the most part, I come in with charts and compositions, and it’s worked on from there. I write outlines for the rhythm sections, but individual players have room to contribute and add. It would be ignorant to stifle their energy.

LEO: What can we expect from the new album?

DM: I would say it’s a little more rock and punk influenced. The sound of the band has matured over the last year.