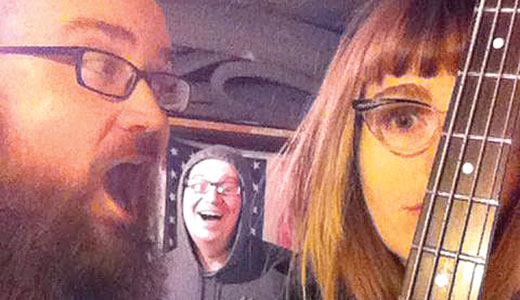 Her mind is not for rent

Sweatermeat is a performance art pop band whose first album, Bad Boobs, is out this month. They play at the Rudyard Kipling Thursday (just don’t tell them they sound like the B-52s). Here are excerpts from a lively conversation.

Yoko Molotov: I started making these weird recordings in the kitchen of my house with my best friend, John. They’re kind of weird, ’cause we just used this broken organ we got at a thrift store and a ukulele. So they all sound kind of depraved. I was, like, “I want to print these and implant them in music stores around Louisville,” ’cause I couldn’t foresee anyone really wanting to listen to this. We didn’t end up doing that, but we kept making these songs and giving them away. Then I learned how to play a real instrument. One day, I woke up and I had a drummer (laughs). … Did you listen to it?

YM: Did you have to go to a doctor?

LEO: Actually, I hear echoes of stuff like The Cramps or the B-52s —

YM: You know what? That is one of our most loathed bands! Them and Rush. They make noises that make me feel like I’m going to get pulled down to hell. When someone says that to me, it doesn’t make me mad — I’m just happy they listened to it. But, man, somebody’s laughing somewhere.

LEO: You play shows for people who usually enjoy what you do. Have you tried to go to the suburbs and assault a crowd?

YM: Yes! Actually, we played Phoenix Hill. My favorite part of that was seeing these old men, these dads that were there — I heard them go, “We paid $10 for this?” The band tried to play on a table. They haven’t asked us back. I don’t know why (laughs).

LEO: The name of the band and the record — do you just like boobs, or is it a comment on American consumerism and using sexuality to sell products?

YM: (pause) I love you, because you’re so smart. No, we’re just really childish.