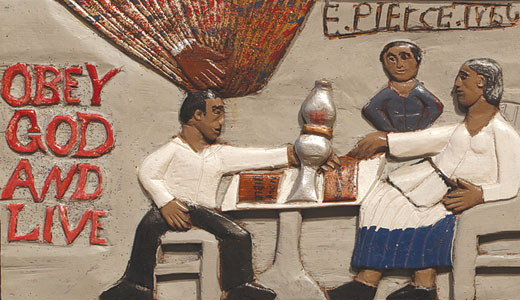 Folk art. While that term is heartwarming and approachable, it doesn’t really explain what type of art it is. After all, we’re all folks. In its current usage, it means art created by a person who is self-taught or who didn’t have professional training.

Elijah Pierce, an African-American sculptor/barber/preacher (1892-1984), was recognized in his later years as a major contributor to American folk art. The Columbus (Ohio) Museum of Art has a large collection of woodcarvings by Pierce and organized the traveling exhibition “The Essential Elijah Pierce” currently at the Kentucky Museum of Art and Craft.

It seems he was meant to be a three-dimensional storyteller, owning a carving pocketknife by the time he was 7. As an attention-grabber, Pierce painted his wood sculptures with brightly colored enamel paint, sometimes adding glitter. His subject matters included animals, autobiographical events and moral lessons.

Many of his narratives were biblical, a result of his devout Baptist upbringing. Pierce eventually became a preacher and opined that “every piece of work I got carved is a message, a sermon.” An impressive example of the combination of these two facets of his life is the oversized “Book of Wood.” The seven low-relief “pages” cover the history of Christianity as well as the life of Jesus. Considered by Pierce to be his greatest accomplishment, he used it as a sermon tool at what he called his “sacred art demonstrations.”

“Obey God and Live (Vision of Heaven)” is his personal tale of forgiveness. The saying “Your life is a book and every day is a page” is the basis for the uplifting “Your Life is a Book.”

The section of the exhibition featuring his small, carved animals might remind visitors of the late local folk artist Marvin Finn. Pierce liked his animals on the exotic side, such as alligators, lions and elephants.

By 1951, Pierce had his own barbershop and artist studio in Columbus, working on his carvings when he didn’t have a customer in the chair. His star-making moment came when he was 79 years old with his first solo show at Ohio State University. This led to exhibitions at the Smithsonian Institution’s Renwick Gallery in Washington, D.C., and the Museum of Modern Art in New York City. He was awarded the National Heritage Fellowship from the National Endowment for the Arts when he was 90 (he died two years later).

KMAC is presenting two art talks accompanying the exhibition. American folk art collector and “The Essential Elijah Pierce” curator Michael D. Hall will lecture about the show on Thursday, March 6. Lynne Cooke, a curator from the National Gallery of Art in Washington, D.C., will speak on Friday, March 14; her lecture will focus on how folk art relates to fine art.

KMAC also has another exhibition on display, “Denise Furnish and Walter Early: Color Stories,” organized by associate curator Joey Yates. It’s a riot of bright oranges, blues and purples. Although Furnish and Early did not create the work together, their art serendipitously complements each other, proving the point that a coat of paint covers many ills.

Both are creative recyclers, using discarded found objects as a support for the bold hues. Furnish is well known for her quilt reworking, giving the worn-out textiles new life with multiple coats of paint. Early is a sculptor who reuses discarded metal pieces to create new linear works.