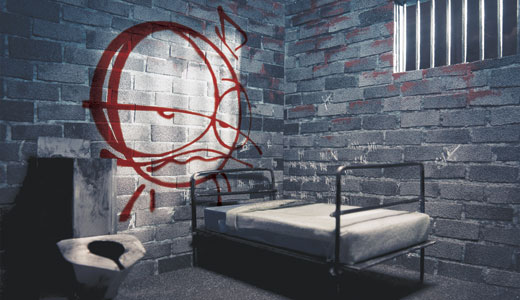 In a move that shocked street artists and meteorologists alike, the man behind the popular “Brrr” street tag has been arrested and charged with wanton weather provocation. Louisville Metropolitan Police Department are calling the stunning arrest the first step in a new zero-tolerance policy for shitty weather.

“The city budget is overextended by more than $1 million because we spent so much money on salting and clearing roads last winter. Someone needs to be held responsible,” said LMPD spokesperson Carey Klain. “Brrr has been mocking the weather gods long enough.”

Philip Rodriguez, who police say admitted to being the man behind the bug-eyed drawing during a truth-or-dare game he played with an undercover cop last year, said he will fight the new charges. “This sets a dangerous precedent,” he told LEO via videophone from the detention center downtown. “‘Frozen’ came out last year. Why isn’t Idina Menzel sitting in this jail cell next to me?”

He added, “Metro needs to let it go. Let it go. Turn away and slam the door.”

Klain declined to respond to Rodriguez’s comments, saying, “We are following all leads. I cannot speak about any ongoing investigations.”

Zeus, lead god and controller of the lesser gods who manage individual elements like rain and wind, claims he did not pressure LMPD to make an arrest, but stopped short of saying Brrr should be released. “Speaking as a god, I think you’re giving this guy too much credit. Speaking as a longtime property owner, he does need to learn that spray-painting that chicken-scratch is a nuisance. I hope he gets community service.”

The “Brrr” tag has been spotted across Metro Louisville and as far away as the Mount Olympus neighborhood of St. Louis, Mo.

Local artists are rallying in solidarity with their fellow artist. “Art is interpretive,” says Jeremy Feinberg, whose current project involves taking apart and reassembling Rubik’s Cubes underwater while a dubstep remix of Morgan Freeman’s narration from “March of the Penguins” plays in reverse. “I have heard from my audience that my work appears to be very clearly about chaos, the penguin condition and the role of color in our perception of the world. Yet I designed it as commentary on the commercialization of music and gender narratives in post-modern penguin populations. Who are we to say what the ‘Brrr’ figure means?”