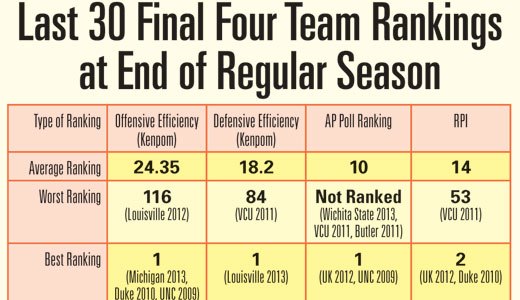 In an attempt to describe what a recent Final Four team looks like from a statistical perspective, and how these analyses might help predict the post-season performances of both Kentucky and Louisville, I have compiled data from four popular ranking systems on the last 20 Final Four teams (2009-2013). These rankings include Ken Pomeroy’s offensive and defensive efficiency rankings, the Rating Percentage Index (RPI) and the AP poll rankings. The AP poll and RPI rankings in the adjoining table were compiled from the end of the regular season, while the two rate-based statistics, offensive and defensive efficiency, encompass the entire season.

RPI and AP poll
The Ratings Percentage Index (RPI) is a simple ratings system based on: wins and losses, where those wins and losses occurred, and strength of schedule. Finally, the AP poll is a subjective poll based on voters.

Predictive nature of the AP poll and RPI rankings
The AP poll and RPI don’t always agree with one another, evidenced by Louisville’s current high AP poll ranking (fifth) and relatively low RPI ranking (24). It is in a team’s best interest, however, if they both agree you’re a top 25 team. Teams that finished in the top 25 in both of these rankings accounted for 85 percent, or 17 of the last 20, Final Four teams. If a team is looking in from the outside of these polls, the odds of a Final Four appearance diminish drastically.

How this affects Louisville and Kentucky
Louisville finds itself in the top 10 of defensive efficiency, which indicates they should be dangerous in the NCAA tournament on this ranking alone. When one takes into account that Louisville is also top 15 in offensive efficiency, they become a favorite. Louisville currently ranks second in the nation in Ken Pomeroy’s overall ranking.

Meanwhile, Kentucky falls well outside of the top 25 in defensive efficiency (43). Only four teams in the last five years were able to overcome their defensive inadequacies and make it to the final weekend. Kentucky also falls outside of the top 25 in the final AP poll. This is another alarming indicator for Kentucky as only three teams in the last five years made it to the Final Four unranked. According to the recent numbers, then, Louisville is a contender and Kentucky is a pretender in the upcoming NCAA tournament.

Then again, this is “March Madness,” and they throw the ball out there for a reason. Cinderella teams beat the odds every year. Fortunately, the games aren’t played on paper. Buckle up for another wild tournament ride.