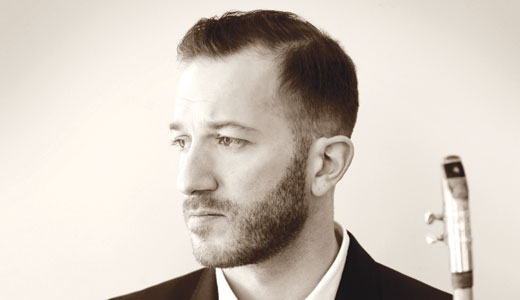 Saxophone and jazz just seem to go together, except when they don’t. Saxophonist Colin Stetson, who has won critical acclaim for his three-volume series New History Warfare, is an object lesson in not pigeonholing or stereotyping artists. Stetson gigs with some high profile acts, such as Arcade Fire, Bon Iver, Feist and Tom Waits, but his solo work is truly that — solo.

Unlike many touring jazz soloists, who either front bands or recruit local talent as backup, Stetson will perform at the black-box arts venue Dreamland without other musicians.

Stetson, a native of Ann Arbor, Mich., who now lives in Montreal, started playing alto sax around the age of 10. While neither of his parents were musicians, he says they were both very supportive of his playing. “I continued to play in school, and by the time I was 15, I was on a fast track to university,” he says. “Mostly classical studies, and a lot of jazz, and a bit of everything for as long as I’ve been playing.”

Asked how he balances playing in bands and being a solo player, Stetson explains, “I’ve made sure I’ve been surrounded and immersed in different and varied musical situations. I try to keep it that way as much as I can. I think probably the last several years have been the most homogenously soloistic — I enjoy having it mixed up like that. Collaborations are completely different than my solo music. It kind of requires a different kind of attention and a different kind of voice and character. I enjoy being able to go back and forth. I find that you get more insights, more ideas, more creativity — one sparks the other.”

As to his musical influences, Stetson says, “My earliest major influence was definitely Hendrix. There was a lot of that in the house. I kind of carried that through my university years and throughout my 20s. One of the major growth points in my playing was trying to emulate sounds and techniques that he would bring up with guitar; I would try to do (that) with my instrument, something that helped me to develop the whole world of what I’m doing now.”

Stetson also listened to metal bands in high school, including Slayer, Metallica, and Iron Maiden, and was first exposed to avant-garde saxophonists like Peter Brötzmann and John Zorn around the same time.

He learned about the circular breathing technique, which allows performers to sustain tones continuously, before he learned of pioneer Rahsaan Roland Kirk. “My teacher, when I was 15, taught me how to circular breathe for its application in classical music. It wasn’t until later on, in high school, that I heard of Kirk, and it was, of course, at that point, hugely inspiring, but it wasn’t the seed for the circular breathing.”

In 2011, Stetson released a two-song, 20-minute EP, Those Who Didn’t Run. On this recording, swirling motifs repeat, building cycles of sound. Asked if the seminal work of Terry Riley affected his own music, Stetson says, “There’s definitely some influence of the Minimalists — we studied that in university — but it wasn’t an in-depth study of that type of composition. I think that the Minimalism that comes from me is born of attention to the natural acoustics and minutiae of the saxophone.”

“In classical music, we are taught to clean up all the extraneous sounds, the dirt and grit and noise,” Stetson continues. “But that’s kind of fighting against (the saxophone’s) true nature, because it’s so resonating. All of this came from paying attention to it all and playing center stage — I started realizing how much time could be spent putting a magnifying glass on all these tiny little (musical) worlds that were coming and going, and I can get quite involved with very little, for a very long time.”

Stetson has a unique way of creating music, balancing scripted melodies with improvisation. “Almost all of my music is through-composed,” he says. “Within certain frameworks, there’s room to expand and contract to various degrees, but it very much has to do with the relationship to the skeleton of the song. On (2008’s) Volume 1, there was more variety — some improvised, some through-composed. On the last record, there was very little improvisation, and it was within parameters. I would never classify it as ‘free.’”