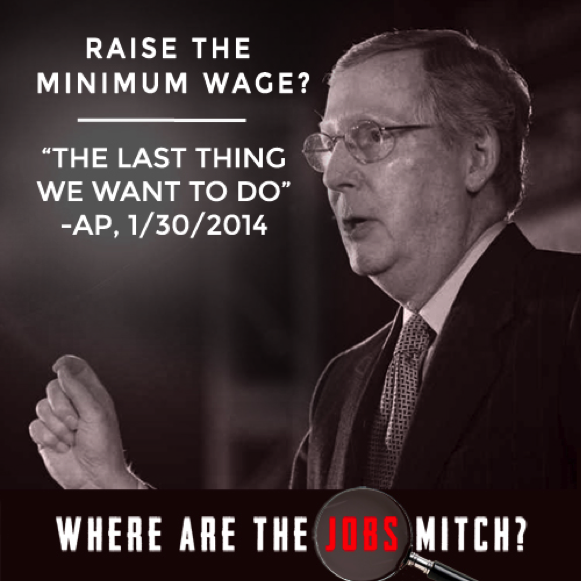 Lyn Riley has just walked home through the snow to her tiny one-bedroom apartment in Louisville’s Smoketown neighborhood after working a seven-hour shift at a nearby chain store that evening. But despite working full time, she only makes $7.50 an hour, frustratingly telling LEO that even with government financial assistance, she can barely scrape enough money together to support her family.

Riley is one of more than 300,000 Kentuckians who make under $10.10 an hour, all of whom would benefit from recent legislation proposed at the federal and state level to raise the minimum wage from $7.25 to that amount. Even with government assistance each month for food stamps and childcare, she recently had to make the agonizing decision to send three of her children to live with relatives, while her youngest two daughters stay with her.

“$7.50 an hour is never going to be enough to support yourself and five kids,” says Riley. “It’s a Catch-22. For people like me who want to get off of government assistance, this minimum-wage rate just makes it impossible. If the minimum wage was raised to $10 an hour, I would be able to be fine. I wouldn’t be a millionaire overnight, but I would be able to have all five of my children in one house.”

The dilemma Riley faces has spurred a strong push by Democratic politicians throughout the country to raise the minimum wage. They argue that while the wealthy have fully recovered from the Great Recession, there are far too many people struggling to survive despite working full time. President Obama gave full-throated support for lifting the federal minimum wage in his State of the Union address last week, and in Kentucky’s General Assembly, House Speaker Greg Stumbo has designated a bill to do so in Kentucky as their top priority.

Despite polls showing a strong majority of Americans and Kentuckians support raising the minimum wage, Republicans at the state and federal level are putting up resistance, saying this would be too burdensome to business owners. Those like Riley are watching intently, hoping a bipartisan coalition can break through the gridlock and give them a much needed lift out of poverty.

A recent study by the Economic Policy Institute showed that such a rise in the minimum wage would lift the wages of one in four workers in Kentucky, and instead of leading to a decrease in employment, would actually boost the state’s GDP by $421 million and create 1,400 jobs.

While many opponents of such legislation characterize minimum wage workers as teenagers flipping burgers part time for extra spending money, EPI’s study showed that this is far from the truth. They found that for those Kentuckians whose wages would be lifted, 88 percent are over 20 years old (with a majority over 30 years old), a majority work full time, and one in four is the only provider of family income. Additionally, 22.4 percent of the state’s children (228,000 in total) have at least one parent whose wages would increase, including one-third of Kentucky’s single parents.

Whereas 26 percent of Kentucky workers were below the federal poverty line in 2001, that number has jumped to 33 percent over the past decade, increasing the need for government assistance at a time when both the federal and state government have been forced to cut back assistance and programs for the poor.

A recent study by two universities showed that 46 percent of fast-food workers in Kentucky are eligible for public assistance programs, while the minimum wage has not kept up with inflation. Some argue this essentially creates a situation where businesses that pay workers below a living wage are being indirectly subsidized by the government to keep wages so low.

While the federal minimum wage was increased in 2007, the $2.13 federal minimum wage for tipped workers has not been raised since 1991. Kentucky remains one of only 13 states to not increase this amount above the federal level, and a 2011 EPI study showed that in such states, the poverty rate for tipped workers and waiters is 16.1 and 19.4 percent, respectively, the large majority of which are women.

HB1 and HB191 passed out of the state House committee with all 15 Democrats voting for it, but only one Republican — Rep. Jim Stewart of poverty stricken Flat Lick in eastern Kentucky — joined them in doing so. The other six Republicans on the committee either voted against it, passed or were suspiciously absent that day.

And here lies the obstacle to such legislation’s chances in Frankfort: Though the  Democratically controlled House is sure to pass these bills, they are sure to face a much tougher road in the Republican-dominated Senate, most of whom have been either reluctant to jump on board, or aggressively opposed to it.

However, recent polling has showed that such opposition to an increase in the minimum wage does not come without a political risk. A Public Policy Polling survey of Kentucky released last week showed that 57 percent of voters favor increasing the minimum wage to $10, with only 34 percent opposed. Even Republicans were closely divided on the issue, with 40 percent in favor and 50 percent opposed. Republicans hope to win back a majority in the state House in November by tying Democrats to an unpopular president and his signature health care law, but if the minimum wage legislation is thwarted, Democrats would likely use this issue as a wedge to win over moderate voters who overwhelmingly support it.

One can look no further than to the largest political race in America this year to see this at play — the U.S. Senate contest in Kentucky that most assume will be an expensive war between five-term Republican Sen. Mitch McConnell and Democrat Alison Lundergan Grimes.

While McConnell voted for the 2007 federal minimum wage increase, he is now strongly opposed to another increase, which faces a tough climb in the current Congress despite polls consistently showing more than 70 percent approval nationwide. His campaign manager, Jesse Benton, referred to the move as “class warfare,” and last week McConnell called such an increase “the last thing we want to do,” arguing it would cause businesses to cut back on jobs.

On the other hand, Grimes has consistently touted her support for such an increase, mentioning it in her first July announcement that she would enter the race, and making it a key part of her stump speech.

“Unlike Mitch McConnell, raising the minimum wage is the first thing I will do as senator,” said Grimes in a press release Monday. “Doing so is not only in line with Kentucky values, but will also have a major impact on the incomes and spending power of tens of thousands of Kentucky families. When I am in the U.S. Senate, Kentuckians will finally have a fighter who will put them and our economy first.”

Though polls over the last six months have showed the race locked in a tie, the PPP survey showed the key undecided voters overwhelmingly support increasing the minimum wage. While McConnell’s main campaign strategy has been to tie Grimes to an unpopular Obama and Affordable Care Act — while Grimes attempts to separate herself — this is one area where Grimes will assuredly try to turn the tables and paint McConnell as out of touch with the struggles of average Kentuckians.

Sitting on her couch late Monday after work — where she sleeps, while her daughters sleep in her bedroom — Riley is hopeful that legislation to boost her wages will pass, but truly wishes those opposed to increasing the minimum wage could see her struggle to provide for her children, often faced with the dilemma of choosing whether to pay a bill or buy something her kids need.

“Those people should be sentenced by a judge to follow someone around … let them live in my house for a week to see if they can balance my budget,” says Riley. “People who don’t agree with increasing the minimum wage obviously have never been in a situation where they have to decide if they want lights, or do they want to eat?”