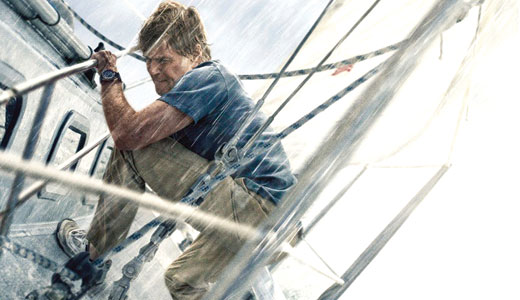 Robert Redford delivers a master’s course in acting in this nearly dialogue-free one-man show set on a leaking boat in the middle of a relentless sea. While his name is never revealed, he wakes up to find his yacht has collided with something, ripping a hole, rendering his radio useless, and starting a countdown to utter disaster as a violent storm appears on the horizon. We hate to reveal much more lest we spoil this perfect movie experience, so we’ll just leave you with this thought: When you die is not as important as how you live. A must-own.

There are at least two things going on in this movie: On one hand it’s the straight-up tale of a young Saudi girl who enjoins a Koran recitation competition to raise money for her own bicycle; on the other, it’s a treatise on the unique, clever and ultimately ridiculous nonsense that is human culture. Or maybe that’s just what we got out of it. Others have spotted the battle of the sexes, the good/bad nature of competition and the inherent genius of children — and subsequent moronity of adults. Whatever this movie is about, it’s damn entertaining and completely mesmerizing, even if subtitled. A joyous, innocent and profound work of brilliance; don’t miss it.

Jerusha Hess, co-writer of “Napoleon Dynamite,” directs this rom-fantasy about a young woman (the ethereal Keri Russell) who harbors a secret obsession with the works of novelist Jane Austen. She ponies up her life savings to vacation at a Limey Austen-themed hotel/park, dreaming of romance with a true gentleman. And, yes, it’s just as gooey as it sounds. A big-ol’ chunka chick-flick with Jane Seymour, Jennifer Coolidge and J.J. Feild from “Captain America.”

DOCTOR WHO: THE MOONBASE

True Whovians know that half of this 1967 Patrick Troutman four-parter was lost long ago by the BBC, with only the audio surviving for parts one and three. That’s why we’re so excited about this release: The geniuses at Planet 55 Studios were once again hired to produce animated visuals based on the original director’s notes to go with the surviving audio track. The tale is terrific, with the Tardis plopping The Doctor, Polly and Jamie on the moon in 2070, just in time to see the second coming of the supposedly extinct Cybermen. A must-own for any fan of great British sci-fi.

Ben Kingsley and Harrison Ford represent Earth’s old guard, unable to prevent an alien race from decimating our planet in this slick sci-fi tale from the works of Orson Scott Card. Earth’s last hope lies in the somewhat puzzling notion that adults are simply unable to understand the Formics; that feat takes the boundless imagination and sensitivity of a child. Therefore, the fate of all humanity rests in the hands of one boy, played by Asa Butterfield of “Hugo.” While we sometimes wondered if the concept worked better on paper, we couldn’t take our eyes off the screen. Visually impressive, with notions you’ll be talking about for days.

Imagine Hyacinth Bucket (that’s “Booo-kay”) from “Keeping Up Appearances” as an amateur sleuth set loose upon seemingly decent society, and you get the idea behind this cracklin’ caper-comedy about an elder fart who is surprisingly good at solving crimes. And now imagine her sidekick is a teenager headed down a troubled road — as played by Dominic Monaghan, Meriadoc Brandybuck from “Lord of the Rings!” — and you have the perfect warm and funny drama as only the British can do it. All 27 episodes on 13 discs with Derek Benfield from “Rumpole of the Bailey” as Hetty’s poor husband. We loved every minute.

HOW I LIVE NOW

Saoirse Ronan is a sullen American teenager dumped on her English relatives at a remote country estate where she meets hunky George “Defiance” MacKay. All seems well until the UK goes to war, causing Britain to deteriorate into a state of martial law. Their bucolic estate becomes a fortress under siege, with Ronan and family hiding from armed government agents, mercenaries and former neighbors — degraded vestiges of humanity, little more than upright animals on the hunt. Sounds like “Lord of the Flies.” Or Shively on a Saturday night. Good stuff.

Benedict Cumberbatch, a relative unknown in The States until becoming “The New Kahn,” has been blowing them away in England for years. Case in point: these exciting tellings of the Sir A.C. Doyle tales. Set in modern times, he is Holmes to Martin “Bilbo” Freeman’s Watson, and a better pairing could not be imagined. This season Holmes needs a new adversary after having just defeated Moriarity in Season 2’s climax. And he finds the perfect evildoer in the form of megalomaniacal Charles Augustus Magnussen, as played by Lars Mikkelsen from the excellent Swedish series “Borgen.” Addictive; our highest recommendation.

Dark, troubled writer Cormac McCarthy joins with fearless director Ridley Scott in this debased tale of a successful lawyer (Michael Fassbender) who makes his first and only illegal deal, then watches helplessly as his perfect world slowly swirls the bowl. Brad Pitt, Cameron Diaz, Javier Bardem, Rosie Perez and Penelope Cruz are all at the top of their form, and the soundtrack is exceptional, but frankly, the movie is a bit of a mess. Too verbose and literary for our tastes, with weird accents, sex scenes from nowhere, unnecessary brutality and surprising inhumanity. In order words, a Cormac McCarthy movie!

On the surface, this is your basic “trapped inside with friends while a viral zombie outbreak destroys the world” no-budget horror outing, but as often happens in these little indie titles, what it lacks in professionalism it more than makes up for in inventiveness. For example, the focus shifts from stark panic to a form of mindless shock and paranoia: Everyone comes to fear that their friend/lover/acquaintance may be “turning” — and it is this fear that is the greatest threat to their survival. Worth a look.

This no-budget teen horror comedy is a royal hoot. More “Buffy” than “Twilight,” the immortal Countess Elizabeth Bathory (Louise “The Revenant” Griffiths) has survived for centuries on virgin blood to become a modern “abstinence educator” at the local HS. Lots of snarky teen-girl cliches, horny/dumbass boys, and recycled SyFy gags abound, but the result is much greater than the sum of its parts. A nicely bloody, wacky ode to everything from John Hughes films to blogs to crazed conservative moms, filled with smokin’ 20-something “teen” girls. We loved it.

A ghost story with a twist: We get to see the haunting from the ghost’s point of view. Pretty little Abigail “Zombieland” Breslin and family die mysteriously in 1986, but for technical reasons remain stuck inside their home, repeating that day over and over. Meanwhile, the new owners, including teen Eleanor Zichy (“Skins”) don’t realize that dark history is about to repeat itself. Not terrific by any means, but an entertaining take on a familiar genre.

Yes, it’s another blast from the ’80s Japanese porn world of Nikkatsu Studios. A very close-knit group of lonely nurses (wink wink) are shocked by their latest member (nudge nudge), Yuki, who helps them sneak in their boyfriends after hours. But she has a mysterious past, leading to tensions that come to a head (say no more!) one night when all the boyfriends and her husband show up for an evening they’ll never forget. These things are a harmless bit of perverse fun filled with attractive people. And the occasional enema bag. Enjoy. (Also available: “Sex Hunter:1980,” a Japanese nudie Giallo!)

REACHING FOR THE MOON

A bio-romance “inspired” by the loves of America’s 1949-50 Poet Laureate, Elizabeth Bishop, starring Amanda Otto from “Lord of the Rings” and “Rake.” She brazenly travels alone to Brazil where she meets architect and beautiful art-fem Lota de Macedo Soares (Glória Pires). They have a famously mature, drunken, tragic, love affair best expressed through their artworks. An uber-chick-flick with Tracy Middendorf from “Boardwalk Empire,” and the great Treat “Deep Rising” Williams.

THE ADVENTURER: THE CURSE OF THE MIDAS BOX

Welsh actor Aneurin Barnard (“The White Queen”) stars as the titular seeker whose family vanishes and the clues lead him into a world of child-snatching demons, supernatural wealth and a mystical object that can save or destroy the world in this steampunk fantasy from England. A very kid-friendly adventure, first in a series, co-starring Lena Headley (“Game of Thrones”), Sam Neill, Ioan Gruffudd and young Xavier Atkins as “Felix”, who nearly steals the movie. Lots of fun.

It’s strange how things work out sometimes. Oscar-winning documentarian Alex Gibey began a work on cyclist Lance Armstrong’s comeback in 2008. Expecting to film an expression of the human spirit embodied in Armstrong’s charismatic physical prowess, he instead ended up filming the downfall of an American hero, tainted with performance-enhancing drugs. An amazingly intimate and very painful recording of a man once considered the very best of our kind. Highly recommended.

A quartet of losers, on the run from a vicious Vegas baddy, end up lost in the desert in this cross between “The Hangover” and “Paul.” Apparently there’s someone from out of town — WAAAAY out of town – that has taken an interest in their situation, but it’s becoming increasingly obvious to these four morons that their new benefactor might not be from around these parts. Maybe not even our solar system. A fun, funny, scary, icky, bloody mess of a film that nonetheless delivers.

Tsui Hark, who has created such masterpieces as “Once Upon a Time in China”, “Iron Monkey” and “Black Mask” brings us this prequel to 2010’s smash hit “Detective Dee — Mystery of the Phantom Flame”, and knocks it out of the park. This action-packed, yet very intelligent, Sherlock Holmes-type adventure set in Imperial China starts with a spectacular attack by an ancient dragon laying waste to a fleet of royal ships, then never lets up. Stars Mark Chao as Dee, with nubile beauty Angelababy (“Tai Chi Hero”) as the would-be virgin sacrifice. Don’t miss this!