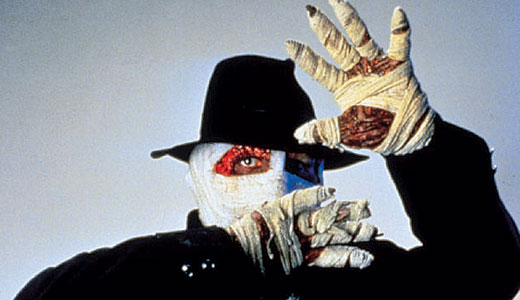 Wow, what a pairing of great, if obscure, ’70s terrors. The first is about a young woman (Jennifer “Screamers” Rubin) who wakes from a 13-year coma to discover she had been caught in the suicide-explosion of a crazed cult — and their ghosts want to drag her body to hell! Co-stars Bruce “Re-Animator” Abbott and the always excellent Richard Lynch. The second finds Lee Grant speaking out against violence, only to draw the attention of sicko Michael Ironside, whose attacks put her in the hospital. Incensed that she still lives, he goes full-on batshit crazy, literally tearing through the hospital with his bare hands to kill her. With William Shatner and Linda “Homeland” Purl.

This film has it all: superb acting, an original plot, groundbreaking special effects, a sick, twisted sense of humor, and a young(er) Liam Neeson in his breakout action/buttkicking role — finally available in a Blu-ray Collector’s Edition! Noble scientist Neeson creates synthetic flesh for burn victims until he runs afoul of evil gangsters who leave him for dead, horribly disfigured. Slipping into madness, he goes looking for revenge. Written and directed by the great Sam Raimi, with Frances McDormand, Larry Drake, brutal violence, pee-your-pants humor, gut-wrenching gore, justifiable rage and more heart than a dozen love stories. Not to be missed.

BATTLE OF THE DAMNED

Yes, big Dolph Lundgren is still around and has now joined the ranks of those who fight zombies in this sci-fi actioner that combines rotters, robots and really young-looking Melanie Zanetti (who was 26 in “Romeo and Juliet,” yet looked so young that ad copy had to be pulled over it being “suggestive of pedophilia”). Filmed largely in Malaysia, whatever genius thought of combining killer robots with zombies should get an award. Perfect, cheap couch fodder.

Having nothing to do with Jet Li’s 1991 “Fist of Legend,” this South Korean drama follows three former high school friends, now adults and desperate to win a ruthless, bloody, TV amateur martial-arts tournament. An interesting side note: While some of the fights are choreographed, others are free-form streetfights in which real blood is spilled. (And now a question: Why is it that TV commercials are screened for nudity, profanity, alcohol and cigarettes, yet routinely show MMA psychos tearing each other apart like animals?)

High-schoolers Michael J. Willett and Paul Iacono have succeeded in staying quietly in the closet until one of them yearns for the popularity that the Big Gay Spotlight will afford him in this surprisingly good teen dramedy. Once outted, the three most popular girls in school — Sasha “Pretty Little Liars” Pieterse, Xosha Roquemore of “Precious” and Andrea “Desperate Housewives” Bowen — can’t wait to add a Gay Best Friend to their wardrobe, leading to a human tug-of-war.

LIFE OF A KING

Cuba Gooding Jr. stops making crappy movies (i.e. “Daddy Day Camp”) long enough to gain praise for this true story. After serving 18 years in prison, Eugene Brown (Gooding) starts the Big Chair Chess Club in the slums of D.C., aimed at at-risk youth. No one believed his fanciful idea would take root, but his simple motto of “Think before you move” teaches the kids to curb their risky behavior and get their minds in order. The results will make you cry. With Dennis Haysbert and LisaGay Hamilton.

Inspired by true events in the Philippines. Sleazy politicians (is there any other kind?) contract with prison inmates to temporarily vanish, perform assassinations and other brutal crimes, then scurry back inside before the police arrive. The perfect crime! That scenario reaches its explosive climax in this tense crime drama after one such inmate gets paroled — and wants to go straight. A pair of desperate cops need him to expose the racket, while his prison protégé has just been given a new target. Can you guess the next victim? Subtitled, but worth the read.

A two-disc collection of 16 new-to-DVD offerings (plus two especially good bonus episodes), a must-own for any fan of Skelton’s timeless humor. Our favorite has to be “San Fernando’s Treasure Hunt” with Guy “Zorro” Madison and Amanda Blake (Miss Kitty from “Gunsmoke”) hamming it up in Gold Rush style. Some of the best comedy ever shown in America; just buy it.

This doc on maverick wrestling promoter Steve Scarborough was a big hit at the 2012 Atlanta Film Fest, but has been having trouble catching a larger audience, which is a shame because it is quite a journey. “Pro” (read “scripted”) wrestling has long been a cultural staple of the South, with colorful local favorites, often in flashy costumes, climbing into the ring against evil “opponents,” devolving into bloody carnage with folding chairs. Scarborough strives to teach wrestlers the long traditions and dignity of the sport, creating his own school — and ultimately his own franchise — something they can all be proud of. Worth a look.

Trin Miller inherits an old house, complete with hot and cold visions of brutality and death. Seen it before? Well, this popular film-festival haunting, originally titled ”Sader Ridge,” rises above by eschewing childish jump-shocks in favor of a slow build in tension; a nice ramp-up in which the mysteries are allowed to simmer and grow in the audience’s mind. Well-written with an all-but unknown cast, including a scene-stealing young man named D’Angelo Midili, who we can guarantee you’ll be seeing a lot more of in the future. Worth your time.

This dramedy wades between Hollywood’s Golden Era and the present, allowing juicy small parts for big stars. Danny Huston plays a former Tinseltown mogul whose son (Jack Huston; hmmm, wonder if they’re related?) tries desperately to maintain Dad’s legacy — not all of which is strictly kosher — while still carving out his own. Sienna Miller and Jacqueline Bisset both play Diana, the love interest, while Billy Zane, breathtaking nymphet Izabella Miko (“Deadwood”) and a host of others ramp up the drama. From the director of “Candyman,” based on a novel by Leo Tolstoy.

The guys behind “Shrek” and “Horton Hears A Who” dreamed up this animated time-travel comedy about a pair of very different turkeys — voiced by Owen Wilson and Woody Harrelson — who travel back in time to prevent the pilgrims from eating turkey on Thanksgiving Day, forever taking their kin off the holiday menu. A new tradition with Amy Poehler and George “Sulu” Takai.

This series would never make it past the PC Police today, but it was perfect family entertainment for the late ’60s. About the time man first stepped foot on the Moon, little Clint Howard (Ronny’s bro) lived in the Everglades with his mom, Ranger daddy Dennis Weaver, and a huge bear, Ben. This lead to serio-comic misadventures that made parents cringe as Clint crawled around under the roaring, snarling bruin. This final season focused more on the mom character, includes one episode where she is trapped under their overturned jeep, which Ben easily lifts off her. (We actually got to meet the retired Ben and offspring at the Homasassa Springs State Wildlife Park back in the early ’70s.)

Stacy Keach, Lauren Lee and Greta Scacchi are the most recognizable names in this German-made 3-plus-hour TV conspiracy-drama that was broadcast on Encore in March 2013. OK, let’s be honest: This movie is an even bigger disaster than the flaming wreckage you usually associate with the name “Hindenburg” — but that doesn’t mean it can’t be entertaining! We suggest you gather lots of friends and cheap beer, then take a shot every time someone spots an anachronism (like the blaring rock title-music). Oh, if only MST3K were still around …

A long, long overdue Blu-ray release of all six Sylvester Stallone “Rocky” movies — including 2006’s “Rocky Balboa” resurrection. Hey, wait a minute! All Rocky fans know that there already is a Rocky Blu-ray set out there, so what gives? In this one, “Rocky” has been digitally remastered, bringing much-needed depth and clarity to the admittedly grainy/fuzzy, rough-looking original. And there’s a new behind-the-scenes “home movies” bonus feature that took us back to 1976, when Stallone, Talia Shire and the rest were still unknowns. We liked it.