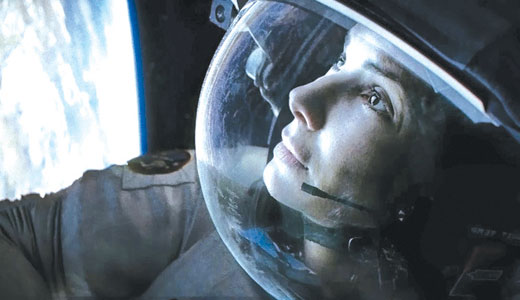 This two-man disaster movie works on every level. First off, the special effects are simply unbelievable, taking place in and around orbiting space platforms: You’ll swear they must have been filmed on location — even better in 3-D! Second, the writing is sparse, simple and brilliant; and third, the only faces you see are two of the world’s most likeable stars, Sandra Bullock and George Clooney. They are astronauts, caught outside their space station when it gets hit by debris, sending everything spinning and collapsing with no means of escape. If this movie doesn’t make you crap your pants, then you should see a doctor. Perfect — a must-own.

Chris Hemsworth clearly loves schlepping around Thor’s hammer in this, his third time at bat. This time he’s preparing for a periodic cosmic alignment that allows all manner of mischief to take place across the universe. And the evil trolls — or “Dark Elves,” if you prefer — are ready to return it all to the blessed darkness in which they dwell, damning all other living creatures to die under their thrall. Easily more accessible and likeable than the original “Thor,” with a fun cast including Natalie Portman, Anthony Hopkins, Christopher Eccleston (lost in troll makeup), Kat Dennings and Tom Riddleson as Thor’s evil brother Loki. Oh, and the last four seconds of the film will make you gasp.

Crime novelist extraordinaire Lynda La Plante, whose works have launched some of TV’s greatest cop shows, is at the top of her game in this Limey series about Detective Anna Travis, played by Kelly Reilly (Watson’s bride from “Sherlock Holmes: A Game of Shadows”). Based on the novel “Silent Scream,” she must solve the murder of a young actress while dragging around her new partner — and disgruntled former boss — Ciarán Hinds (“Game of Thrones”). Simply the very best detective show on the telly; don’t miss it.

A completely unredeemable sci-fi actioner about long-forgotten genetically-diddled-with cold-blooded experimental Soviet soldiers frozen under Arctic ice. Oh, no! They’re out! And it’s up to Dominic “Prison Break” Purcell, Michael “ER” Ironside and Adam “Revolution” Beach to save us. Directed by Canadian TV stalwart Sturla Gunnarsson, who was obviously having fun with the genre. Good-looking Camille Sullivan, however, as the only woman in the cast save some Russian strippers, really needs to talk to her agent.

Young Spencer Lofranco, who made a name for himself by upstaging Andy Garcia and Vera Farmiga in the romcom “At Middleton,” repeats his performance in this true tale of violence and redemption. He plays James Burns, a very bad Denver gang-banger who winds up in federal prison while still a teen. There he meets hardened baddie Roc (Michael Trotter). Somehow, the wizened con gets through to the kid that he can still turn his life around. Lots of big names in the cast, but Trotter holds his own nicely. Check it out.

One of the biggest hits of the ’80s, this TV legal drama created by Steven Bochco (“Hill Street Blues,” “NYPD Blue”) ruled nighttime airways for eight seasons and spawned a dozen spin-offs and imitators. Corbin Bernsen and Jill Eikenberry star as attorneys for the law firm of McKenzie, Brackman, Chaney and Kuzak, along with Richard Dysart, Harry Hamlin, Susan Dey and, of course, Jimmy Smits. Previous DVD releases retailed for $69.95/season, making this the first in a less-insulting reprice release. The perfect place to start your complete-series collection, with all 23 episodes and great bonus goodies.

We were not big fans of this “Carol Burnett Show” spin-off when it first appeared on 1983, but we’ve changed our minds in re-watching them on DVD. The fun cast, including Ken Berry, Betty White and (on occasion) Carol Burnett, deliver performances that most comics today can only dream of. The third season finds Aunt Fran (Rue McClanahan) dead, with the family standing to receive a $35K inheritance — but only if the irascible, cantankerous Mama (Vicky Lawrence) can control her temper for two very long weeks. Pure TV gold.

Some critics have hailed this as “an American masterpiece.” We won’t go that far, but it is a compelling, hilarious and heartbreaking tale of ordinary people being ordinary. A drunken Bruce Dern and his estranged son, Will Forte, go on a road trip to collect the riches he believes he has won, stopping along the way to visit old friends/enemies/relatives, announce their good fortune … and maybe rub some noses in it. The dialogue is perfect, the tone sublime and the scenery is an actor all unto itself. Hmmm, maybe this is a masterpiece.

A much anticipated Blu-ray Collector’s Edition of this colorful Alec Baldwin action-crime comicbooker. The Shadow, essentially the prototype for Batman, was born in a series of 1930s pulp novels, spreading to other media until it became a hit radio serial voiced by Orson Welles. Now in 1930s NYC, Baldwin fights his most deadly menace, the atomic-armed last descendant of Genghis Kahn, played by John Lone. Lots of fun with a cast that includes Penelope Ann Miller, Peter Boyle, Ian McKellen, Tim Curry and the late, great Jonathan Winters. Recommended.

Penélope Cruz and Emile “Lone Survivor” Hirsch star in this tear-jerking, heartstring-plucking, artsy flashback Euro tale of war and children and estrogen. She’s a professor who takes her son (the director’s son, Pietro Castellitto) to the ruins of Sarajevo, where she met and lost his father — or at least the man he thought was his father. A complex and ridiculously romantic drama chock-a-block with war, rape, friendship and really lousy vacation choices.

You can be forgiven for having never seen this unusual, dark French cop drama, but you’ve got no excuse for missing the chance to own it on DVD. Famed writer/director (and former cop) Olivier Marchal follows a desperate, violent and somewhat debased squad of peacekeepers through busy Paris streets. Their nature may be rough, but it gets the job done. When their leader is accused of corruption it fractures the group, shattering that fine line between justice and punishment. But then he commits suicide, driving the men together, ever more determined to clear his name … until it becomes clear that someone higher up is using them in a sick game. Subtitled and simply outstanding.

We love odd Japanese pop-movies, and this may be the most Japanese Japanese movie ever made. Yuki, a gentle loser and substitute music-teacher, helps out by acting as orchestra conductor, despite being terrible at it, in hopes of attracting the attention of yummy little Kawashima. Then the band hires a real conductor, Kei, who immediately bullies everyone into submission — and sets his cruel sights on Kawashima! Yuki must become a man or forever live in disgrace. Fun, with great lines like “Now my baton unfolds our destiny!”

Some odd casting — Rob Lowe as JFK, Michelle Trachtenberg as Oswald’s wife and Ginnifer Goodwin as Jacqueline Kennedy — raised a few sniggers in this made-for-TV retelling of the 1963 assassination, as reported in the book by Bill O’Reilly. But they carry the movie well enough, given that this is a product of National Geographic, where the focus is on documenting what is generally agreed to have happened, not wallowing in thousands of arcane theories. Worth your time.

PEOPLE OF A FEATHER

If you think this winter has been a bitch, check out this doc on the Inuit people of northern Canada. They survive almost year-round in weather that makes our worst look like a beach in Florida, a harsh and mystically beautiful realm that has birthed a culture unlike any you can imagine. And it’s all kept in silent harmony thanks to a duck. Beautiful, magical and profound.

This subtitled French series, filmed in a palette of stark grays, is one of the most popular and awarded TV shows throughout Europe and Australia — there’s even a hit video game! The ultimate gritty cop thriller, it goes beyond the crimes and victims to reveal how humans use law as a weapon against those they feel are “different.” And what happens when these marginalized citizens decide to make their own laws? Lawyers turn drug lords into “victims”; international criminals move across borders to kill with complete immunity; money equals free speech. This season finds Judge Roban (Philippe Duclos) moving front and center as the group deals with bureaucratic interference. A dark look at justice on the streets of Paris; brutal, shocking and highly recommended.

STRAIGHT MEN & THE MEN WHO LOVE THEM 3

Apparently there is a common fantasy among some gay men of befriending and/or romancing straight men. If that describes you — or even if it doesn’t — then you’ll enjoy this third collection of international shorts on the subject. Running from just 10 minutes in length (“Early One Summer” about a camping trip between a British student his PE teacher) to a half-hour (“From Here To There” about two college buds from Hong Kong who link up again after 10 years at the wedding of a friend), each is minor gem. Some of the best gay-themed drama and comedy from around the world. Check it out.

This no-budget indie has a lot to like. A disturbed hunting guide (Don Scribner of “The Cooler”) reluctantly takes a pair of greenhorn NYC buttholes (Jan-David Soutar and Clayton Myers) deer hunting in the deep snow of a Maine winter. But something had happened there the previous year, something that has been slowly gnawing at the guide’s sanity, and then he discovers that his only child is very much in danger. This may be a one-way trip for all concerned. Good stuff.

This Argentine drama is mesmerizing. John McInerny plays an Elvis impersonator — and a damn good one! — living the big life in a small way as The King, completely losing himself in the fantasy. Then his ex-wife suffers an accident, forcing El to face reality and take charge of his young daughter. In real life, McInerny actually is an Elvis impersonator, not an actor, but both his performances are spellbinding. Don’t miss this!

Arguably the most popular of the Transformers, Bumblebee takes center stage in this collection of animated tales. Here he’s voiced (when his voice is working) by long-time voiceover artist Will Friedle (“Batman: The Brave and the Bold,” the new “Thundercats,” “Kim Possible,” etc.) who often plays a superhero on Cartoon Network’s animated “Mad” TV show. As the show’s resident scout — and youngest member — Bumblebee is usually the first to discover whatever fresh evil Megatron and his cohorts are up to. He’s our hero.

A big old British chick-flick romantic drama filled with dusty, hunky guys, wealthy society types and one fragile beauty yearning to break free of her social entrapments and experience unfettered the hot, hard, pounding, er, life of 1831 Australia. Previously filmed by Hitchcock, this is the BBC miniseries version with Lisa Harrow as the drunken wife of gruff and unrefined John Hallam. She is kept “in her cups” by the maid, Julia Blake, who has the hots for cultured fortune-seeker Peter Cousens, who in turn becomes attracted to the ever-deteriorating missus of the house. Filled to the brim with soapy secrets, betrayals and a spot of skin, don’t you know. Can’t be bad.