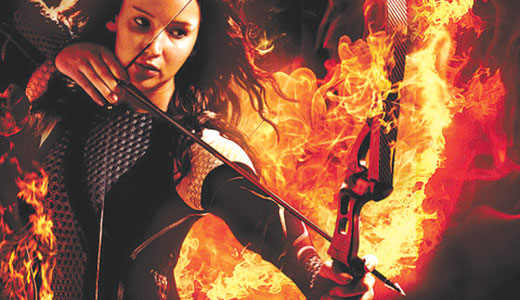 If you’re not already intimately familiar with this immersive and devastating film achievement … well, what can we say? The film follows the true tale of Solomon Northup, an educated citizen living in pre-Civil War New York, kidnapped and sold to Southern farm owners Benedict Cumberbatch and Michael Fassbender. The fact that he is black really shouldn’t have to enter into it, should it? Chiwetel “Serenity” Ejiofor is simply amazing in the lead, supported by Paul Dano, Lupita Nyong’o, Paul Giamatti and Alfre Woodard, with Brad Pitt in an extended cameo as the abolitionist who triggers his freedom. Just buy it.

Local lass Jennifer Lawrence continues to grow and impress in part two of author Suzanne Collins’ dystopian series. Thrust from crushing poverty and starvation to the pinnacle of Panem culture via a sadistic execution-cum-reality-show in which children hunt and kill other children for the entertainment of the elite (and punishment for a generations-old uprising), she now enjoys a certain amount of privilege. But it’s all a lie — including her supposed romance with Josh Hutcherson — and her bravery is spawning acts of revolution across the country. Simply excellent.

This amazing bit of crime nonsense finds Bryan Cranston as a nearly blind Russian criminal seeking his stolen money from dirty cop Logan Marshall-Green (“Prometheus”) at the lost Canadian motel of icy Alice Eve and her poor 9-year-old daughter, Ursula Parker (TV’s “Louie”). Cranston takes Eve and Parker hostage, forcing her to chase down the cop, leading to a series of double- and triple-crosses. Will Eve save her daughter, or is she more interested in the money? Not a great movie by any means, but entertaining as hell.

Tuva Novotny is Puck, the beautiful, intelligent and crafty young mystery-solver at the heart of these sexy Swedish whodunits based on the works of Darmar Lang. She always seems to be stumbling into mysteries, usually with the help/hindrance of her hubby, Einar (Linus Wahlgren), and their friend and police superintendent Ola Rapace (former spouse of Noomi Rapace). Described by some as “Mad Men” meets “The Killing,” these are six of the most literate, intelligent, stylish, steamy and entertaining tales around. Recommended.

German cinema produces surprisingly powerful and intelligent movies these days. Case in point: this tale of a mature husband/cop and father-to-be who finds himself developing romantic feelings toward his jogging partner. His male jogging partner. But the movie is less about homosexuality than it is the battle between societal expectations and inner happiness. An exceptional adult drama, well worth your time.

This female-empowerment juggernaut features a host of big-name voiceovers from Meryl Streep to Cate Blanchett to Selena Gomez, all exploring the many ways little girls are institutionally mistreated, abused and exploited around the world — and their infinite potential to save us all. Facing arranged marriages, slavery, poverty, brutality, ignorance and disease, only one thing can bring about change: education. Each of these nine tales is the work of one girl paired with a writer from her own culture, making it an intimately personal journey.

This under-the-radar FX comedy hit stars potty-mouthed Australian Jim Jefferies as a would-be stand-up comic in L.A. who faces cruel life with a pair of loser friends, including Dan Bakkedahl (“The Daily Show”). No matter what he tries to do, no matter how noble his aims, it always turns to crap. Man, can we relate! With D.J. Quals (“Supernatural”) as Bakkedahl’s wheelchair-bound brother and frequent physical gag. May not be PC, but it is damn funny.

A pair of rival managers at a big Chinese corporation can become wealthy for life by securing control over their major stockholder’s shares. Problem is, that guy is currently relaxing at a spa in Thailand, setting in motion a race to cousin-up to him and win his cooperation. Along they way, one of the men meets a fellow traveler with an odd bucket list of crazy-ass things to do in Thailand, constantly screwing up the managers’ plans. A major box-office hit in China with the usual overacting, camera-mugging, painful stunts and drunken debauchery.

The names Shaun Micallef and Kat Stewart may not ring many bells with American TV audiences, but both are major stars in their native Australia, the setting for this flirty, clever, funny series about husband and wife crime-scene cleaners who are forever stumbling into clues that the police miss. Sweet and charming, bloody and gross; a sexy, action-packed screwball series that reminds us of the adventures of Nick and Nora Charles (look it up). Addictive; our highest recommendation.

This unnecessary remake of the 2003 Korean hit is redeemed by casting Josh Brolin in the lead, with a supporting cast that includes Elizabeth Olsen, Sharlto Copley and Samuel L. Jackson. Brolin is an everyman, suddenly kidnapped then held in solitary confinement for 20 long years — then just as suddenly released. Or is he? Layer upon layer of conspiracy, loss, mystery and pain drive him forward to discover the truth. Director Spike Lee uses the strong “R” rating to let us experience Brolin’s anger in graphic brutality. Check it out.

All 26 short episodes of Cartoon Network’s math-magical series “Adventure Time with Finn & Jake,” about a human boy and his “brother,” Jake, a future-dog who can stretch to any size or shape. But the real thrill is how unbelievably deep and profound these damn silly things can be, despite their innocent nonsense. This season introduced more continuing characters including Fionna and Cake, plus the Ice Princess and a smattering of holiday-themed episodes. Includes a host of never-before-seen special features. Simply amazing.

Surely by now no one needs an introduction to the fussy Belgium detective as played to perfection by David Suchet in this very long running BBC juggernaut. This season features all of the usual Poirot touches — the otherworldly elegance of Art Deco Europe, gorgeous backdrops, fabulous characters and brilliant plots — plus the addition of a clutch of top-notch guest stars including Tim Curry, Elizabeth McGovern and John Hannah. Our favorite episode this season is the sublime “Cat Among the Pigeons,” set in the Meadowbank School for Girls, featuring a kidnapped princess (exotic Amara Karan from “Darjeeling Limited”) and a haunted king’s-ransom in rubies. Some of the best TV ever lensed.

This is a “zeek”: one of the 10 million zombie-attack films of recent years. And it’s a cheapie. So why watch it? Because this is how it should be done. A cannibal-virus boils into a zombie apocalypse in a small town, the residents of which either don’t know or don’t want to know what is going on. A solid cast of unknowns led by good-looking blonde Kerry Finlayson (who also wrote the movie), a nice sense of humor and a great sense of “ick.” What more could you want?

This movie has its detractors, but all in all, we thought it was a well-made little sci-fier with a good cast and state-of-the-art special effects. An international crew, including Liev Schreiber, Elias Koteas (“Chicago PD”), Romola Garai (“The Hour”) and Olivia Williams (“6th Sense”) are about to wrap up man’s first mission to Mars when they discover something that threatens not only their own lives, but the entire human race. OK, so it sounds like every space movie going back to the ’50s — that doesn’t mean it can’t be entertaining. And we found it very entertaining. Prove us wrong.

Nemo Nobody is the last mortal man on Earth. And at 118 years old, he lies on his deathbed, dictating his bio to a reporter who, like the rest of humanity, has achieved a sort of near-immortality. But the story he tells seems to be an amalgam of several lives, from watching his parents divorce, to sprinkling a lover’s ashes on Mars, to falling for his step-sister, to even more unlikely and conflicting sagas. But they all trace back to a single choice not taken at a train station. They can’t all be real. Or can they? Jared Leto stars with Sarah Polley, Diane Kruger, Rhys Ifans and Juno Temple. Brilliant.

For the uninitiated (and musically dim), the town of Muscle Shoals, Ala., is one of the most important towns in American culture of the past 50 years. It was there amid crushing poverty and ignorance that Rick Hall opened FAME studios, providing a voice for such greats as Greg Allman, Dickie Betts, The Swampers (FAME’s house band) and others, launching the signature guitar-rock explosion of the early ’70s. This is the story of FAME studios, past and present, and how Hall flipped the darkness of institutionalized racism into some of the greatest music ever made. Breathtaking.

We’ve mentioned Yip Man in these pages before, the real Martial Arts master who first taught secret techniques and mentored a young Bruce Lee. Here director Kar Wai Wong leads Tony Leung in a wild, epic actioner based on man’s life at the end of China’s dynastic age, with the country in lawless, chaotic revolt. The cast list is a who’s who of great Chinese actors including massive Cung Le (“The Man with the Iron Fists”), Qingxiang Wang (“Red Cliff”), Elvis Tsui and lovely/deadly Hye-kyo Song. Now available in perfect Blu-ray.

If you’ve got a little female rugrat at home, then no introduction is necessary for the Swan Princess, a straight-to-video animated series inspired by the ballet “Swan Lake.” Here Princess Odette (voiced by hard-working voiceover artist Elle Deets — aka, Laura Dawn Bailey of “Soul Eater”) decides to adopt a little girl. But a group of frightened forest critters, led by some naughty talking squirrels, believe that the child is evil. Filled with bright and happy kid songs.

Over time this Cartoon Network favorite has gotten incrementally more sophisticated, yet remains at its core the misadventures of a hapless father/scientist who quietly laments the state of his dim-bulb children who are forever wandering into situations that require skill, brains and luck to survive. Our favorite this season is “Spankitopia,” wherein the good doctor vacations on the Greek isle of Spanikos to play in the sun. Only the Venture Bros. Could turn that into a wild action-adventure. Just plain goofy; we love it!

The latest outing in the Thomas the Tank Engine animated series (their 17th!) Contains six all-new stories centered around learning to be a better person, plus some nice bonus features. Our favorite finds vain James (who is secretly afraid of the dark) having to haul smelly fish on midnight rails, with a big, sloppy ending.