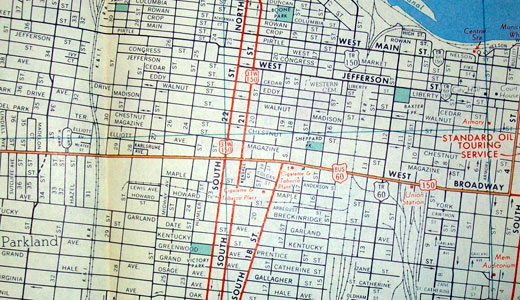 In 1954, when Andrew Wade and his wife, Charlotte, wanted to move their family to the booming Louisville suburbs, their race proved too big a barrier to overcome. First, white realtors refused to sell to them because they were black. Then, after a prominent white couple acted as “fronts” and purchased the home for them, the Wades were met with fierce, violent opposition. Shots were fired through their windows. A burning cross was placed in a lot near their home. They were refused newspaper and bottled milk delivery. They lasted six weeks before they called it quits and moved back to the West End.

In 2012, the U.S. Department of Housing and Urban Development conducted a national test to compare the home-seeking experiences of otherwise comparable whites, blacks, Hispanics and Asians. They found that well-qualified minorities seeking information about recently advertised units were told about and shown fewer homes and apartments than whites. For example, a white home seeker might be told there are four two-bedroom units available in a complex, while his black equivalent might be told there are only two.

These types of barriers exist because of the country’s long, tumultuous history with race. Driving this point home is a new 20-year action plan for fair housing entitled “Making Louisville Home For Us All,” which was released last week at the Louisville Metro Human Relations Commission’s annual Race and Relations conference. The report examines the discriminatory housing policies and practices of the city’s past and sets a timeline comprised of 70 steps to remedy such problems.

University of Louisville social scientist Catherine Fosl was the lead researcher for the new report, which was funded by a HUD grant. “There’s a tendency to think that history is not influencing race relations today like it did before the civil rights movement,” she says. “In housing, that is most clearly not the case.”

As of 2010, 45 percent of Louisville residents lived in extreme racial segregation, making the city the 26th most segregated of 150 metropolitan areas. These residential patterns, the report explains, are not accidental or by individual choice. Instead, they were shaped by things like the widespread denial of mortgage loans to minorities, the large-scale displacements within low-income neighborhoods when freeways were built through them, and land development codes that confine multi-family and low-income units to small areas.

“Even though equal rights undid a lot of the harm of slavery and legal segregation, it still left a bunch of policies in place that continue to influence housing,” says Fosl.

For the neighborhoods in the West End, that can mean increased health risks associated with older housing units and limited access to economic centers where jobs exist. The same applies for other historically mistreated groups — women, people with disabilities, religious groups, non-nuclear families, refugees, etc. Particularly at risk are people who fall into more than one protected class, such as single black women who are the heads of their households, of which the city has many.

“The report is about the racial history. In the U.S., race has always been correlated with inequality, so it becomes an important lens, but it’s not the only lens,” says Fosl. “It really is about wide forms of segregation. Race and racism inform these other inequalities.”

When plans for the study were announced back in 2012, Carolyn Miller-Cooper of the Human Relations Commission stressed to LEO that the goal was to create concrete, achievable steps that wouldn’t sit on a government shelf unnoticed.

What have been delivered are 70 “action steps,” broken down into five categories — government commitment, community education and engagement, built environment, funding opportunities and economic development, and legislative change. Each has a time frame of three years, four-to-seven years, eight-to-12 years or ongoing throughout the 20-year expanse.

One step involves setting in place a policy to review government actions’ impacts on fair housing. Another is to conduct a market analysis to assess housing demand by area, type, price, rental rate and connection to job centers. Metropolitan Housing Coalition executive director Cathy Hinko called these two in particular “real game-changers.” Both of these actions were assigned a three-year date for completion.

MHC and other housing advocates have already been lobbying for changes to the land development code to expand mixed-income and multi-family beyond the urban cores they currently exist in.

“Even the early zoning laws are very explicit not just about race but income and family type,” says Fosl. “They see multifamily housing as evil. We can’t have fair and affordable housing until we unravel those kinds of things.”

Other steps include raising public awareness about fair housing issues and addressing health issues by encouraging frequent and regular testing and remediation programs to improve air and soil quality in areas where concentrated amounts of protected classes reside.

Then, of course, there’s funding fair housing programs and continuing the battle against vacant and abandoned properties, which disproportionately affects residents living in the low-income and racially segregated neighborhoods in question.

“All these things took a long time to put into place. They’re not going to be easy to undo,” says Fosl. “That’s why it’s a 20-year plan, not a three-year plan. It’s a generation.”