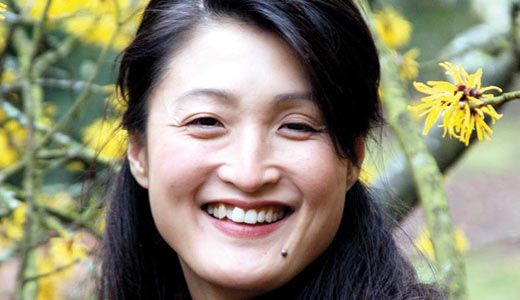 “I’m fascinated by people who are willing to step into the ring,” says playwright Kimber Lee, whose play “brownsville song (b-side for tray)” opens March 14 as part of the 38th Humana Festival of New American Plays at Actors Theatre of Louisville.

Lee is talking about the boxing ring. And she’s talking about herself. She first took up boxing as a fitness regime, but soon became something of a gym rat, training with serious amateur and professional boxers. She grew fascinated by the technical, strategic and psychological aspects of the sport, she says — and her tutors have included serious boxing luminaries like Ray Velez.

But it’s the boxing personality that especially ignites Lee’s interest. “It takes a particular kind of person to box,” she says. “When you step into the ring, you’re on your own, with nothing to rely on but your own physical and spiritual resources.”

And in Lee’s writing, it’s possible to read the rhythms of the ring. An advance script for “brownsville song” is rich in feints and parries, shuffling pauses, flurries of pulsing energy and phrases hit like jabs to the chest. This is the first time one of Lee’s plays has had a full-fledged professional production — and it promises to be splendid on the stage.

The play was inspired by the story of a young boxing student who was victimized by a crime that went mostly unnoticed by the media. From that incident, Lee weaves a rich, time-shifting coming-of-age story full of detail, anecdote and intimacy. Her characters are interested in things like permission slips and college admissions essays. They’re concerned in how stories get told, who gets to do the telling, and where the truth is to be found.

Those are Lee’s concerns as a playwright, too. And, in fact, anyone looking for truth these days in American culture is well-advised to head for the box office of a regional theater like Actors or any of the smaller companies that have become such important players in Louisville’s arts scene. Much of American mainstream popular culture has become a contrived wasteland where even a “wardrobe malfunction” takes on the guise of a provocative idea.

Huge budgets, high-stakes marketing campaigns, emerging technologies and desperate attempts to give shareholders a return on investment don’t often lead to interesting art — unless we assume, for instance, that 3-D imagery compensates for one-dimensional storytelling.

Theater — especially regional theater — is the most consistently adventurous art form in the United States. It’s a place where writers, producers, directors and actors can explore adventurous ideas and approaches to storytelling. And Louisville is fortunate to host the Humana Festival, a central part of that enterprise. Not every experiment succeeds, and not every production flourishes, but from now through April 6, the city plays hosts to some of the finest artists in the field.

This year’s lineup opens with “Partners,” by Los Angeles-based Dorothy Fortenberry, an award-winning emerging playwright whose past work (“Status Update”) has plumbed the serio-comic implications of social media. In “Partners,” she takes on a cluster of contemporary subjects — including food trucks, money and gay marriage.

Next on the agenda is Lucas Hnath’s “The Christians,” directed by Actors’ artistic director Les Waters. Hnath has become a familiar part of the Humana Festival scene over the last few years. His “The Courtship of Anna Nicole Smith” was a provocative entry in the 2010 festival, and his challenging, rigorously reasoned “Death Tax” was a memorable part of the 2012 season. “The Christians” takes a look at an institution that’s become a prominent fixture in American life: the megachurch. The lead character pastors a flock of thousands and serves them with all the modern conveniences. But that’s not the whole story.

Jordan Harrison’s “Maple and Vine,” about a couple who exchange their contemporary lifestyle for life among a community of 1950s re-enactors, was a witty entry in the 2011 festival. Harrison returns this year with “The Grown Up,” opening March 7. It’s been described as a “time-bending, sad, funny adventure about how to survive growing up,” and traces the life of a character from boyhood through aging and infirmity.

And it’s impossible for a theater lover not to get excited when the name Anne Bogart shows up on a program. As founder and artistic co-director of the SITI Company, Bogart is an enormously influential figure in contemporary theater, making contributions both as a stage director and as a seminal theorist and writer. She’s directed everything from Greek tragedy to contemporary opera, and her Actors production of Elmer Rice’s “The Adding Machine” (1995) was so riveting and beautiful that two decades later I can still summon images of the set and the choreography. This year, she’s directing “Steel Hammer,” a new look at the legendary folk-song hero John Henry, in a SITI Company production with music and lyrics by Julia Wolfe, an original text by Kia Corthron, Will Power, Carl Hancock Rux and Regina Taylor, and recorded music by Bang On A Can All-Stars and Trio Mediaeval. My advice: Get your tickets now.

Likewise for “Remix 38,” this year’s installment of the always popular Apprentice Company production. It’ll be a look back at plays that reflect the history of the Humana Festival — and that sounds like the recipe for something very special.