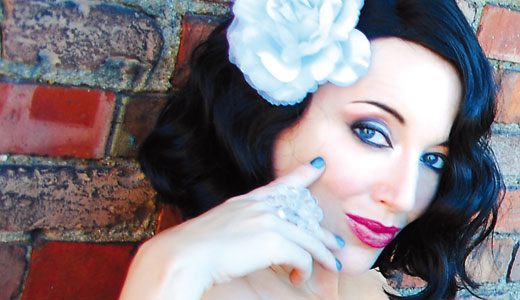 The cantankerous burlesque troupe Va Va Vixens has been spreading Louisville love for nearly five years. They boast more than 25 half-nekkid members, all of whom will climb atop the Headliners stage this weekend for their final performances of the sexy show “Va Va Valentine.” LEO sat down fully clothed with sassy Vixen Lola Licious. She didn’t bite, although we hoped she would.

LEO: Are you named after anyone in particular?
Lola Licious: I really wish I had a great story about how my name has a dual or deeper meaning. I have always secretly wanted to be a Lola, and I am a fan of alliteration (especially for burlesque stage names). You want to pick a name that is memorable, flashy and suits your character. I like mine so much, I had it tattooed on my hip. Wanna see?

LEO: Um, err, uh … what’s the secret of burlesque?
LL: Burlesque is all about teasing — giving and taking it back. It’s flirtatious, coquettish and sensual all at the same time. It’s the slow removal of a glove in such a hot and sexy way that it might as well be a brassiere coming off. Burlesque also does something wonderful for women because of its acceptance of performers regardless of age or body type. Ladies, you need to do yourself a favor and go to a burlesque show to combat all the Hollywood lies you consume on the daily! You will leave saying, “Hmm, I guess that little extra awesome on my hips is OK after all,” or “Lola Licious has tiny tits and she’s just fine with them — maybe I could learn to embrace mine.”

There are many types of burlesque — some troupes are more traditional with an effervescent emcee who introduces striptease numbers. The Va Va Vixens are a bit different. We are actually more of a vaudeville, or variety show, with aerials, group dance numbers, lots of laughs and a flowing storyline.

LEO: What made you first dabble in burlesque?
LL: It’s a perfect example of being in the right place at the right time. Five years ago, I had no idea I was about to become a performer. I never had any aspirations to perform, never practiced in the mirror, never longed for adoring fans and applause. I was just taking a yoga class at Urban Active minding my own damn business. Little did I know my amazingly limber teacher, Christiane Nicoulin, was cooking up what would become Louisville’s largest burlesque troupe. I got on the mailing list simply for show notifications, and a few months later, decided to go to auditions. I was still not interested in the spotlight — I was more attracted to the idea of being a “bunny.” The scantily clad bunnies walk around wielding candy and condoms in cigarette trays to set the tone of the show. This was much more my speed.

Again, I was minding my own little bunny business when my fellow performers challenged me to get up there — and I haven’t stopped since. I have an innate love of the limelight, which I attribute to being a Leo.

LEO: What’s your favorite part of being in the limelight?
LL: Two parts: the beginning and the end. I love the creation of a new number or character. The process of planning the outfit, picking the song, choreography … it is a new medium of creativity I enjoy tremendously and happen to excel at. Then there comes the applause — the reward for all the work after everything has come together. It’s a huge rush when you know the audience has fallen in love with you and your character.

LEO: Is burlesque sexier than stripping?
LL: For some it may not be, but I do think most people prefer leaving something to the imagination over seeing a spread vagina sliding down a pole. But damn, those girls can work it, and I give them props for that. And to fuel this debate further, one of the most influential and famous burlesque performers today, Dita Von Tease, claims there is no difference at all between stripping and the striptease. I respectfully disagree.

LEO: You’re a bit naughty, aren’t you?
LL: Honey, you have no idea.