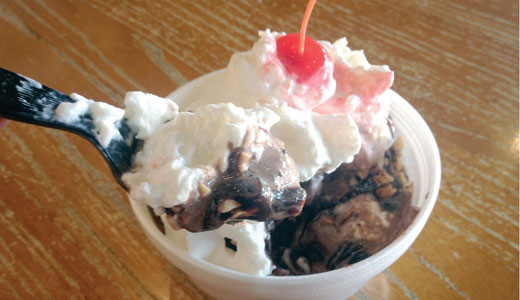 Peace, Love & Chocolate @ Homemade Ice Cream & Pie Kitchen
Throw away your Cosmo, turn off this season of “The Bachelor” and put those batteries back in the drawer. The key to pleasing a woman can be found in the interplay of three simple words — peace, love and chocolate. Worship her (love), bring her no drama (peace) and be sweet or have sweets for her at all times (chocolate). Homemade Ice Cream & Pie Kitchen lives by this mantra, and they even dedicated a flavor to it. Try it in sundae form and devote yourself to the powers of passion, harmony and cocoa from the inside out. One scoop of this will keep you out of the doghouse for at least a week — unless you’re just a dick. —Sara Havens

Drag Queens and Kings
Life’s a drag in Louisville, a river city now home to more drag clubs than comedy clubs. Those old enough to remember the ’80s stand-up boom might find that surprising; what would be even more surprising is if the drag boom (fueled, at least in part, by the success of the cable TV competition “RuPaul’s Drag Race,” now about to begin its sixth season) could make more Ru-esque mainstream stars out of drag queens and kings like the stand-up boom made stars out of Seinfeld, Rosanne and Tim Allen. Longstanding icon The Connection has kept downtown in drag (and shower parties) for many wonderful years, and now Nashville’s Play has expanded to our Butchertown, across from where the Blind Pig once ruled. No shade, Connection fans, but Play is young, fresh and even boasts a “Drag Race” alum, Jade Jolie, who moved here to join its cast. So we’ll see where Lady Gaga goes, next time she’s in 40202. And that’s the tea, hunty. —Peter Berkowitz

The Polar Vortex @ BW3’s
A few weeks ago, the soulless snow canceled all my weekend plans, one of which included partaking in LEO’s Bloody Mary Battle (which has been rescheduled to Feb. 16). So how did I turn that frown upside down? I met some friends at BW3’s in the Highlands for a few rounds of their nicely spicy marys. So after about two and a handful of Tums, I was ready for something different, but beer wasn’t it. Joe, the hunky bartender on duty, read my mind like a back-alley palm reader. Something fruity and refreshing was, indeed, in my future. He brought the bounty to the table, and we “ooohed” and “awed” like he’d pulled a rabbit out of his hat. The drink was amazing — equal parts stimulating, bubbly, pink and frothy. He even let us name it, which we fittingly called The Polar Vortex. So what’s in it? A little bit of vodka, a lot of Red Bull, a splash of pineapple juice, a swirl of grenadine and a whole lotta bartender-shakin’ magic. The Polar Vortex — if you can’t beat it, drink it. —Sara Havens

Buffalo Trace Bourbon Cream
Never drink Baileys again. After discovering Bourbon Cream during the distillery tour at Buffalo Trace, I have made it my mission to convert others to this smooth deliciousness. Created from straight bourbon made here in Kentucky and real cream in New York, Bourbon Cream is delicious served chilled or on the rocks straight from the bottle, but when mixed with root beer and a scoop of vanilla ice cream, it’s next-level good. This adult root beer float will make you feel so grateful to live in one of the few states that actually sells the liqueur. A relatively new product of Buffalo Trace, Bourbon Cream isn’t distributed nationwide yet. So, right now there’s the added benefit of feeling like you’re in on a secret the world is oblivious to. —April Corbin

Artist Chimel Ford
Sometimes I make good decisions, like when I went to Chimel Ford’s first solo art exhibition at WHY Louisville’s Electric NuLu Gallery last spring. Ford has fast become a uniquely recognizable artist around town, mostly displaying pieces interpreting some of the many familiar logos, facades, celebrities and other branding we can’t ignore in city life today. But unlike a Warhol type, Ford seems gleefully taken in by the bright colors, exaggerating them to expose their goofiness in a way that feels loving. I still lust after two of the pieces shown at WHY Louisville — pieces now hanging in that shop’s bathroom — the “Nerds” box and the Haribo gummi bear box. At the time, financial realities made buying both seem impractical — in hindsight, a bad decision — but my beloved made me very happy at holiday time with a unique Ford piece commissioned just for me! You, too, can hire him to make your home — make that your world — more fun at [email protected] —Peter Berkowitz

Artist Molly Uravitch @ Spot5 Art Center
Plant and animal figures take on new whimsical and functional forms in Molly Uravitch’s “In the Garden with the Beast: An Exhibition in Clay,” the newest offering at Spot5 Art Center. The exhibition features ceramic pieces with sculptural flare. My personal favorite is a vase that looks like an alien Venus flytrap that would eat me if I got too close. There are friendlier pieces, too, like cute little bug-eyed animal peppershakers and mugs with patterns that might be of a bizarro jaguar from another universe. “In the Garden with the Beast” is open now and runs through March 1. My living room and dining room are willing to house them indefinitely for a private, hands-on exhibition, but I doubt the artist would find much value in that option. —April Corbin

Insomnia Cookies
At the risk of sounding like a reclusive hermit or lazy asshole, I love delivery. It involves minimal physical interaction with other people, and being fully dressed is optional. Department stores and pizza companies have long understood this. Now, everyone else is catching up. Enter Insomnia Cookies, a late-night cookie delivery chain that understands that sometimes you really, really, really need a dozen snickerdoodles at 2 a.m. but aren’t physically or mentally able to get them yourself. The target demographic here is obvious, and the store is appropriately located right next to the University of Louisville. Still, everyone who lives in their delivery zone should reap the benefits of this service. Meanwhile, I’ll yearn for more specialized delivery businesses. Nord’s donuts delivered every morning via drone? A girl can dream. —April Corbin

Luke Hancock’s beard
Did anyone else’s ’80s nostalgia button get pushed at the beginning of the Cards’ season when senior forward Luke Hancock sported a scruffy yet trim beard? I was transported back in time to an era when hair was big, economic turmoil was small, it was OK to wear your sunglasses at night, and Kenny Loggins reigned supreme over motion picture soundtracks (“Caddyshack,” “Footloose,” “Top Gun”). Luke’s uncanny resemblance to the soundtrack star makes my heart skip right in to the danger zone. And every three-point shot he sinks makes me want to kick off my Sunday shoes. Please, Louise, pull me offa my knees. Jack, get back, c’mon before we crack. Lose your blues, now everybody cut footloose! —Sara Havens

Apple Fritter @ Nord’s Bakery
For several years, my Louisville has been defined in either of two ways: there’s Nord’s, and then there’s everything else. The days when Nord’s doesn’t feel like the center of the universe are the ones where I’ve already eaten too much Nord’s and, as a human, simply do not possess any more internal ability to add more donuts; days when they’ve sold out of everything they’ve made and left a handwritten note on the door saying, “Sorry, sold out for today”; and times when I am asleep and, sadly, dreaming of something besides Nord’s. There’s the bacon donut — surely you know about that by now. There’s other special donuts — ones with nuts, ones that look like pretzels — and then there’s the apple fritter. My first awareness of it came from the original chef of 21c’s Proof, Michael Paley, who praised it in a national food magazine. It’s everything you want in a donut and so much more — fruity and simultaneously thick and filling yet light and fluffy. It’s a meal — I couldn’t possibly eat two back to back. (Well, I shouldn’t …) —Peter Berkowitz

Lou What Wear’s style
I need some statement necklaces, a fur vest and leather leggings. First, though, I need a better sense of style and a willingness to try different looks. Local fashion blogger Danielle Rudy Davis of Lou What Wear (louwhatwear.com) has all of these things. In one outfit post, she looks like a posh magazine editor in all black except for a dramatic oversized ombre sweater and bright orange infinity scarf. In another, she’s looking quirky and fun with a mix of sparkle and lace. Her style is bold but not ostentatious, stylish but comfortable. This is what my clearance rack closet dreams about when I’m not around filling it with my “well, it almost fits” fashion finds. —April Corbin

Vermont Maple Walnut @ The Comfy Cow
Some might think this is an easy pick, predictable and obvious. But sometimes things work because they work, because they’re really good. That they became popular is entirely understandable and a good thing. Miles Davis, The Beatles, George Carlin, pizza — these are some things that are popular and great, and even at their worst are still more interesting than most alternatives. So do I hesitate to praise the Cow? Perhaps for a knee-jerk millisecond, but then I think about how many times they’ve been there for me when I really needed them, and how ironically warm their (metaphorical) embrace is. Each month, they have new, special flavors to try, most of which are full of delightful tastes and sometimes completely surprising. But sometimes I need my ol’ reliable, their Vermont Maple Walnut, made (hopefully) with “100% pure Vermont maple syrup and loads of freshly toasted walnut pieces.” Oh, and ice cream. Do you really need more? —Peter Berkowitz