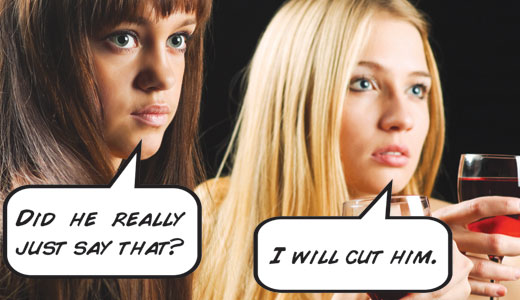 When I approached Lydia Lagenour and her friend at the bar, I felt a flutter in my stomach, even though I knew I was only doing research for a story. Ligneous is an attractive young woman with beautiful brown hair and a nose ring — the latter of which led to confusion after I asked my question.

Oops, didn’t expect that response. So I paused, and then delivered the line: “No, when you fell down from heaven.”

She stared at me in disbelief — would she slap me? Pour her drink on my head? And then it happened: laughter all around.

At that point I admitted I was just looking for a reaction, and I asked her if she could recall the worst line she’d ever heard.

“I don’t really hear too many bad pickup lines,” she said, adding that she usually just hears “I feel like I’ve met you before.”

But in those events a cheesy line was delivered, she would just say hi and try to disengage. She said she’s in a relationship now and doesn’t really go to bars to meet people, but I asked what she would think if someone actually tried to use that “heaven” line to pick her up.

“I would think they were kind of awkward, actually,” she said. Ouch.

When I got back to my table, my friend Greg said, “She turned beet red.”

So, I guess it must have worked on some level.

Since Valentine’s Day is upon us and plenty of people are single, I decided to write this to find out what, if any, pickup lines work, and which ones absolutely don’t. And, of course, I collected from female friends quite a few of the worst they’d ever heard.

Later in the night, I approached two attractive women with another line. “Something’s wrong with my cell phone,” I told one of them while extending my phone toward her. The woman, who later identified herself as Heather, looked momentarily confused, and then I added, “Your number’s not in it.”

“I’ve heard worse,” she told me. She said one guy approached her and said, “If you were a booger, I’d pick you first.”

Her response? “I laughed and turned around.”

I then approached a cute young woman whose name I would learn to be Cindy.

“I have to tell you something,” I said. She looked confused. “If you were on the menu at McDonald’s, you’d be called ‘McGorgeous.’”

And yet more laughter. I told her about my research and asked her to recall the worst line she’d ever heard.

Cindy’s advice: “Guys should just be themselves.”

I found a blog site called FeministFrenzy.com, which had a post that addresses why bad pickup lines simply don’t work: “When a stranger comes up to a girl and the first thing he says is an overt pickup line,” the post says, “… the dynamic right off the bat is the guy as the Observer and the girl as the Observed. When this happens to me, I feel yanked from whatever I was doing and landed splat in front of this dude’s fucking gaze. The rejection starts right away in order to create space.”

So, if the Observer is in obvious pursuit of the Observed, there’s only one way the latter can react, and that is defensively.

I asked a few friends about their pickup line experiences. It’s kind of hard to believe some of the stuff men say to women.

Jenny Brown is a single Louisville-area mom who goes out often to hear live music. For her, pickup lines aren’t the problem so much as what she calls “the all-night, psycho stare-down.”

My own ex-girlfriend, Beth Keaton, even outed me by reminding me of the line I used on her years ago: “Can we twist again like we did last summer?” (Yes, it’s embarrassing now, but in my defense, she was wearing a poodle skirt.)

My only regret in this entire exercise is that I didn’t get to use a pickup line that has been handed down in my family. I’m not joking — when I was about 14, my maternal grandfather, who I called Pappaw, gave me this line to use on girls: “If your daddy knew what I was thinking about you right now, he’d beat the shit out of both of us.”

I bet back in his day, Pappaw got all kinds of tail.