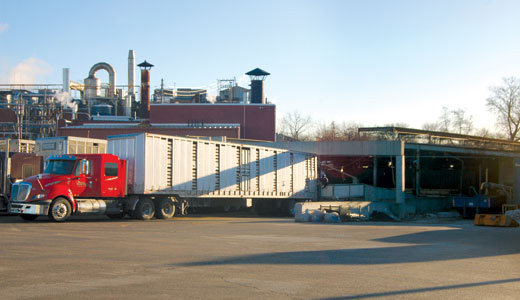 Louisville’s Butchertown neighborhood is used to the all-too-familiar odors emanating from the 10,000 hogs meeting their demise daily at the JBS Swift slaughterhouse, nestled between East Main Street and Story Avenue. Now the smell has been joined by another familiar presence, as local residents are battling the company over zoning permits relating to the plant’s operation.

On Monday, the Louisville Metro Board of Zoning Adjustment (BOZA) heard more than five hours of arguments in a hearing to approve a conditional use permit for the JBS Swift plant, much of which mirrored the contentious fight in 2009 pitting the company and its workers against the neighbors who are downwind from the plant.

At issue is whether BOZA should allow Swift to build new additions to the plant it says are necessary, or side with the Butchertown Neighborhood Association (BNA) that such permits should be denied — or at least new conditions made — due to the plant’s inability to curb its emissions in the burgeoning neighborhood where it sticks out like a relic from a bygone industrial era.

This fight escalated in 2009 when it was discovered that Swift illegally began construction on hog chutes without first obtaining the proper permit. Later that year, BOZA granted the permit with conditions for Swift to cap its average daily slaughtering to 10,500 hogs and pay $137,500 and landscaping and mitigation measures, with the workers’ union accusing BNA of wanting to shut down the plant and take away their jobs. Since then, the matter has been fought in the courts with competing lawsuits between Swift and BNA over compliance with those conditions.

The BOZA hearing ended before the board’s members could make a final ruling, which is now pushed backed to their meeting on March 17. No matter which way BOZA rules, the debate will continue to rage over how an industrial facility operating since the 1800s — once surrounded by stock yards — is able to incorporate itself into an up-and-coming neighborhood, with jobs, public safety and quality of life all on the line.

The two main points of contention at Monday’s BOZA hearing were whether a permit would be granted for Swift to complete its aborted 2009 attempt to completely enclose its hog chutes where they are unloaded from trucks, as well as construction of a new “stunning” line, where hogs are electrocuted into incapacitation before being killed. Swift’s attorney, Glenn Price, argued that the additions would improve efficiency, reduce odor emissions, improve humane treatment of the hogs, and improve worker safety.

The last point about not increasing the amount of slaughtering at the plant was contested by Jon Salomon, attorney for the BNA. While Swift contends that its cooling storage capacity for slaughtered hogs is no greater than the daily maximum of 10,500, Salomon argued that Swift’s history of rule-breaking and the lack of proper regulatory oversight — combined with the newfound efficiency — is a reason not to let the permit be approved. If BOZA did approve the permit, Salomon said there should be strict new conditions put in place.

“The three conditions we would suggest are capping slaughtering at current rates (6,400 per day in 2012), making sure there’s some way to verify they’re not increasing the slaughtering capacity, and enclosing all the operations,” said Salomon.

Price countered that the 6,400 figure was arbitrary and Swift would be hurt competitively if they completely opened their books to inspectors, saying they would only be open to the city officials looking at their books with advance notice, and only figures over the 10,500 limit being written down.

Asked by a board member if they have any plans to increase their refrigeration capacity, Price answered, “No ma’am. Not to say that it could never happen. But if it ever happened, we would have to come back before this board and you would have to approve it first.”

Salomon of BNA urged the board to examine not just the proposed new additions to the plant by Swift, but its entire footprint. The first conditional use permit was granted to the plant in 1969 — modified once in 1981 — when the nature of the neighborhood was much more industrial than residential, and the number of hogs processed considerably lower.

“We can’t find a single other top-100 metropolitan area (in the country) that has a facility like this operating at this scale,” said Salomon.

The board heard testimony from attorney Chris Sanders of the United Commercial Food Workers, who represent more than 1,000 workers at the plant, a dozen of which came to the hearing in yellow UCFW shirts.

“There are 1,100 of us wearing yellow shirts who are concerned about losing their jobs,” said Sanders. “So any time we have a hearing like this, we get worried. We’re the third largest manufacturing company here in Louisville. Our folks have living wages, good health care … we don’t want to lose that.”

The 2009 fight was heated, as UCFW workers handed out flyers with Salomon’s address and phone number on it, accusing him and BNA of trying to shut down the plant and throw them out of work.

The Butchertown Neighborhood Plan adopted by Metro Council in 2008 suggested finding another less urban spot within Jefferson County for Swift to relocate to, with Councilman David Tandy of District 4 — where the plant is located — writing a letter to BOZA in July of 2009 suggesting the same. However, after a concerted UCFW campaign and BOZA approving the permit that November, Metro Council voted 23 to 2 in favor of a resolution advocating “keeping the butchers in Louisville’s Butchertown neighborhood.” Tandy voted for the resolution and did not respond to a request from LEO for comment on the plant’s future. Mayor Greg Fischer’s office says that he has no comment, citing the pending matter before BOZA.

One of the two council members voting against this resolution was Tina Ward-Pugh, D-9, whose constituents are downwind from the Swift plant. Ward-Pugh told LEO last week that the debate isn’t about shutting down the plant but finding a solution that works best for both sides.

“Surely there are places in Jefferson County off the interstates with a bunch of farmland that doesn’t have a nearby community immediately affected on all sides of it,” said Ward-Pugh. “Nobody’s saying let’s put it in west Louisville or southwest Louisville, in the middle of another part of the city … It is something we probably need to refocus on.”

JBS Swift — which threatened to move its plant out of Louisville during the 2009 debate — says that the cost of building a new plant elsewhere in Jefferson County is too exorbitant.

The BOZA hearing also featured nine speakers who live in Butchertown, arguing that the plant, with its nauseating emissions and constant truck traffic, is a nuisance and health hazard.

Fourth-generation Butchertown native Will Carle noted the 2011 leak of 80 pounds of anhydrous ammonia gas, which led to the evacuation of the plant, hospitalization of one worker and a warning for all residents within a mile to stay indoors. He said he rarely lets his children play outside due to the plant’s emissions, adding that the amount of ammonia at the plant has doubled over the past decade.

“I don’t think it’s OK for a plant to expand without doing the necessary things to protect me and my children,” said Carle. “Not only is it bad business, it’s being a bad neighbor.”

Other speakers noted that Swift constantly runs diesels trailers on an adjacent lot leased from the city to refrigerate the slaughtered hogs, adding air pollutants that are particularly harmful to children and the elderly. The Metro Air Pollution Control District fined Swift $37,250 in 2011 for violations dating back to 2007, and Swift currently has three notices of violation standing for 11 infractions in 2011 and 2012. Since that time, APCD says there have been no further violations brought to their attention, and none involving the diesel trailers.*

“We’ve been told to contact APCD,” said John Moore of Butchertown. “We have in the past to limited effect. Frankly, I’ve learned to think that it doesn’t really do any good. We make lots of phone calls, not much happens.”

* UPDATE: APCD clarifies, "APCD has not issued any new notices of violation (NOVs) since 2012, but we have gotten complaints and we investigate them all."