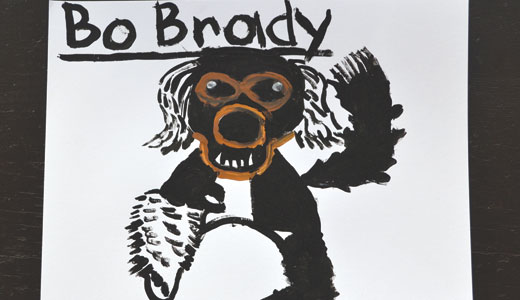 While the creativity of hip-hop you hear on the radio has continued to wane, a class of fresh alternative rappers has filled the void on quality, and that’s precisely the niche Hopsin fills. A rapper whose rise to fame came curiously and atypically through introspective-fueled music in a series called Ill Mind of Hopsin, last year’s Knock Madness release saw him spitting with a fiery rawness and urgency, often dwelling on reflective and thoughtful themes. Hopsin’s refusal to rap about drinking or drug use is reflected in his lack of live-friendly party anthems. But fear not, he has plenty of pulse-pounding hype tracks to get the crowd pumped. This is for hip-hop heads; leave your Top 40 mindset at the door. —Austin Weber

How would you spend your last moments on earth? Surrounded by loved ones? Traveling the world? For English professor Vivian Bearing, those last moments are spent quietly, alone in a hospital bed, as she reflects on a life devoted to work, the slow unraveling of her world by ovarian cancer, and the power of metaphysical poetry. Margaret Edson’s acclaimed and moving play brings a big dose of heart, and wit, to CenterStage’s stellar season. The show is especially personal for Artistic Director John Leffert, who explains, “Both of my parents have passed away with cancer within the past five years. I’ve come to a point where I think it’s going to be a cathartic piece for me, and I’m looking forward to delving into that subject matter that, unfortunately, I know too much about.” The run includes a special benefit performance for Gilda’s Club Louisville on Feb. 16. —Jennifer Harlan

Referred to as “the diva of contemporary comedy,” Sommore will perform her “Standing Ovation Tour” set on Valentine’s Day along with openers Bill Bellamy, Tommy Davidson, Mark Curry and Tony Rock. Sommore, born in Trenton, N.J., has concocted a successful mix of class and sass in the stand-up world and has been featured on “Showtime at the Apollo” and “Def Comedy Jam.” She’s also credited with being the first female host of BET’s “Comicview.” This veteran comic is also an accomplished writer, producer and entrepreneur, but these pursuits have fallen by the wayside as she goes after a career in comedy. Cupid might want to take cover, because there is no telling what will come spilling out Valentine’s evening on the Kentucky Center stage. —Chloe Gaines-Hall

Sometimes I wish for the days when dating seemed as simple as asking for a dance or going for a ride around town. The Frazier History Museum is once again throwing a Valentine’s Day-themed event that hearkens back to those days — the days when “Boogie Woogie Bugle Boy” and “Chattanooga Choo Choo” were as popular as “Timber” and “Drunk in Love.” Swaying cheek to cheek was hotter than twerking, and swing dancing swept the dance floors. The fourth annual Frazier Canteen will feature music by the 17-piece Don Krekel Orchestra, playing popular big-band WWII classics, and will be accompanied by the Ladies for Liberty vocal group modeled after the Andrews Sisters. There will be a buffet, and WWII dress is encouraged. Just remember to dance with the one who brought ya. —Sara Havens

Lingerie and laughter, bouncing busts and busting out laughing, ta-tas and ha-has — anyway you look at it, the combination of burlesque and comedy makes sense. The two forms of entertainment have shared the stage since the vaudeville days. On Saturday, they’ll share one at The Bard’s Town. Improva-Sutra pairs local comedy troupe Project Improv with Lexington-based Kentucky Burlesque Society for a night of sexy performances and improvised “After School Special” sketches. Your host for the night will be a clueless high school coach forced to teach sex-ed. Improva-Sutra is an inexpensive but effective date night activity, just in time for that Hallmark holiday. Be wary, though. Attending this show could be a gateway to even stronger and longer local burlesque and comedy shows. —April Corbin

A flick of the wrist. That’s all it takes for Boris Zakic to make art. Granted, it’s a creative and talented flick, with the resulting blobs of paint standing on their own or as part of a highly detailed image. It’s all a bit of a delightful dramatic ruse. Zakic is a man steeped in the classical tradition but with a modernist bent. He explains the work like this: “In 1548, Pontormo observed that ‘painting consists of material hellishly woven, ephemeral and of little worth, because if the superficial coating is removed, nobody any longer pays any attention to it.’ The show at (Galerie Hertz) is just that, with only one exception: a refusal to lament the perishing audience just yet. It’s hopeful in that regard.” —Jo Anne Triplett

Tiffany Robinson will sign and discuss her first book, “Zoe’s Sidewalk,” a title aimed at inspiring children. The story follows young Zoe, who struggles to make a difference for her grandmother, who she almost lost to a heart attack. Robinson, a military veteran with a master’s degree in public health now working as a research assistant at U of L, was inspired to write “Zoe’s Sidewalk” (which includes lush illustrations by Yoko Matsuoka) after working on PhotoVoice projects, which encourage people — anyone from schoolkids to parolees — to express themselves through photographs. Robinson says, “Although February is Black History Month, I look at it as a celebration and recognition of American history … I hope ‘Zoe’s Sidewalk’ will inspire people of all ages to make a difference, and make some good history.” —Peter Berkowitz

Informal jamborees have been a part of Kentucky since the founding of the commonwealth more than 200 years ago. In fact, a barn dance is what gave bluegrass founder Bill Monroe his start in music. From square dancers to banjo players and lovers of traditional folk music, Kentuckians have been coming together for years to celebrate the state’s unique culture through barn dances and jamborees alike. Carmichael’s Bookstore welcomes Paducah resident and Grammy nominee J.D. Wilkes (The Legendary Shack Shakers, The Dirt Daubers), author of the recently released “Barn Dances and Jamborees Across Kentucky.” From artist to filmmaker to author to musician, Wilkes is a man of many hats. His hoedown won’t be ending anytime soon. —Chloe Gaines-Hall

But do you have a sense of humor? Let’s find out. On their Bandcamp profile, the Chicago band Wishgift pulls quotes like these: “… will make you want to not make eye contact with any one of these guys for the rest of their lives,” (Doug Mosurock, Dusted Magazine) and “Weird time-changes and some guy bleating on his saxophone …” (YELLOW GREEN RED). And then there’s the more supportive Perte Et Fracas, who wrote, “Angular noise-rock that fits perfectly into the genes of their hometown.” So there you have it. For fans of Chicago post-punk/noise/prog jamz, and local lovers of label Sophomore Lounge, releasers of 2011 Wishgift EP Folk Twain, here is your all-ages chance to make eye contact and judge for yourself. —Peter Berkowitz

‘A Show of Love: Pet Portraits’

Here’s your heartwarming story of the week: 8-year-old Halle Shoaf offered to paint pet portraits in exchange for a small donation to The Arrow Fund. Over the course of two months, the Bloom Elementary School third-grader painted nearly 30 portraits of dogs, cats and one horse. Her efforts raised almost $500 for the Louisville nonprofit, which specializes in extreme cases of animal abuse. Now, Halle’s cute collection of portraits will be unveiled in a public art show at Spetz Gallery. The Arrow Fund has also announced the formation of a “Teen Arrow” club for young people who want to help their cause, so expect more feel-good stories of fundraising youngsters in the future. —April Corbin

Under the guidance of the New Media Project, helmed by the power duo of industrious avant-garde ambassadors Tim Barnes and Joel Hunt, Louisville’s aptly named micro-venue Dreamland has become an oasis for some of the most exciting, forward-thinking, experimental music. Their line-up of unmissable live performances continues with Brooklyn-based guitar wizard Chris Forsyth, whose astounding long-player from last year, Solar Motel, is my undisputed nomination for this year’s “How the Hell Did I Miss This?!?” award. He has a playing style equal parts American Primitive and New York art rock, and on Solar Motel, he enlists a full band, resulting in a brilliant record equal parts rock ’n’ roll reasonability and ludic psychedelic rapture: Imagine John Fahey playing drunken Television covers with Crazy Horse. Much-beloved California-Louisville supergroup The Ritchie White Orchestra opens. —Joey Keegin

We regularly laugh or nod in agreement at those small drawn boxes. The strips of cartoons, either comical, serious or a little bit of both, are highlights in newspapers around the world. Curator Slade Stumbo searched the archives of The Courier-Journal, U of L and the Filson Club to find work from the 18th century to today. This led to Louisville-related cartoons as well as those featuring famous characters such as Snoopy and Beetle Bailey for the show “On the Strip.” On Saturday, PUBLIC is presenting “Saturday Cartoons with Marc Murphy” to be moderated by WFPL’s Jonathan Bastian. Murphy is an editorial cartoonist at The C-J. Stumbo will lead exhibition tours before and after the program, with the conversation beginning at 2 p.m. ($10 for LVAA members, $15 non-members). —Jo Anne Triplett