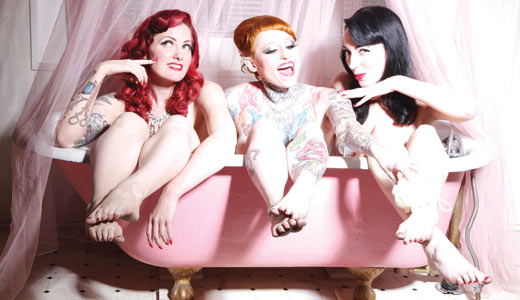 Hard Candy is Louisville’s longest-running monthly LGBT party, but this month they’re spicing it up with a move to an appropriate new location. Play Dance Bar is now hosting “RuPaul’s Drag Race” viewing parties on Monday nights, and this month’s relocated Hard Candy happens to coincide with this week’s season six premiere of the TV show. Better yet, two queens (and I’m not talking about a British Royal) participating in season six — Laganja Estranja and Milk — will be at the event. You can expect an out-of-the-ordinary show with Estranja’s contortion-like dancing and Milk’s lengthy history with the Dairy Queens, a group of NYC drag queens known for sporting especially over-the-top ensembles when they’re out painting the town. —Chloe Gaines-Hall

U of L Jazz Fest?

Bassist Christian McBride can bring the funk as bad as Bootsy, but stays with the classic piano trio sound on his 2013 record, Out Here, with pianist Christian Sands and drummer Ulysses Owens Jr. Their Friday concert for the 2014 U of L Jazz Fest will feature them alone, and with U of L’s Jazz Ensemble I (JEI), performing pieces associated with McBride’s big band work. McBride is sandwiched between Brazilian guitarist Bruno Mangueira on Thursday and trumpeter Sean Jones on Saturday. Mangueira plays bossa nova and other styles from his homeland, and also composes and arranges. He will perform with the U of L Symphony and JEI. Jones is perhaps best known for his work with the Jazz at Lincoln Center Orchestra. He is featured soloist with the U of L Faculty Ensemble and also with JEI. —Martin Z. Kasdan Jr.?

One of the most interesting things about refugee stories is that they are simultaneously personal and global. “Luz” details the individual but intersecting journeys of three fictional refugees named Luz, Helene and Zia. At the same time, the play explores gender-based violence, environmental issues and multi-nationality. Watch, and remember that Louisville has a sizable refugee population made of individuals with stories just as deep and moving. Performances of Looking for Lilith’s “Luz” run through March 8 at the Henry Clay Theatre, but if you go opening weekend, you’ll be able to attend a post-performance “talk back” event featuring Catherine Filloux, the acclaimed playwright behind this moving play. —April Corbin

‘Why I Collect’ by the Rev. Al Shands

Collectors are among the unsung heroes of the art world. We’re usually talking about the object and artist when we discuss visual art. Someone might ask where it’s currently located, but most people don’t care who owned it before the museum (exception: Jewish-owned art from World War II). But without the collectors who feel the need to donate, a lot of museums would have bare walls and floors. We’re lucky the Rev. Alfred R. Shands III lives in our area. His collection of contemporary art and his commitment to our visual art community makes us, well, blessed. He will discuss what drives him to collect as well as “the significant connections he sees between visual arts and universal human themes …” This is behind-the-curtain insight from one of our best. —Jo Anne Triplett

The folks of the Wayward Actors Co. are taking on a pretty impressive production this week. “Doubt: A Parable,” written by John Patrick Shanley, debuted as an off-Broadway play but was moved up to the Walter Kerr Theatre on Broadway in 2005, where it won the Pulitzer Prize for Best Drama and the Tony Award for Best Play. “Doubt” was adapted into an Academy Award-nominated film, starring Meryl Streep and the late Philip Seymour Hoffman. The powerful drama chronicles events as Sister Aloysius, the principal at a Bronx school, takes matters into her own hands when she suspects that young Father Flynn has been having improper relations with a male student. This play takes a tale of morality and turns it around into one of a surprising mystery. —Chloe Gaines-Hall?

Some folks make it easy: Instead of answering “What kind of music do you like?” with “All kinds,” Karsten Nelson replies, “Older artists: Springsteen, Van Morrison, U2; and modern: Dawes, The Lone Bellow, Mumford and Sons.” So now you should already have a good idea of where he’s coming from, and if you like those kinds of sounds. (Also smart? Name-checking some respectable folks who are also hugely popular). He’s spent his time playing in bars for folks with other issues on their minds besides listening to songs, and Nelson has made the push to be seen as a serious contender in his own right. His new record, In the Ground, was recorded by Kevin Ratterman at La La Land, but you can hear the songs live Friday with other drinkers who also like songs. —Peter Berkowitz??

While historians and other people who know some things that happened before the invention of social media can tell you all about the history of the more famous Cairo Gang, let’s focus on the Irish-American guitar hotshot Emmett Kelly (again — the guitarist, not the more famous person with that name). Known around these parts as Will “Bonnie ‘Prince’ Billy” Oldham’s most trusted musical accomplice, Kelly has also been fronting his Cairo Gang for almost a decade. Though quite obviously skilled on his instrument, Kelly is also known for his taste and subtlety, heard most recently in last year’s Tiny Rebels EP, a step taken toward blowing up their earlier work. You can look for it at Astro Black Records, where they might even be shopping that afternoon. —Peter Berkowitz??

Though Bangin’ and Clangin’, the new EP by the 23 String Band being released, is only 15-plus minutes long, you can expect plenty of big bangs from the beloved stringers tonight. Known for having friends in high places (MMJ, Houndmouth, Ben Sollee, The Beatles, Mick Jagger’s dentist’s niece) and a love of collaborating with said friends (Cheyenne Mize, Wax Fang, Jalin Roze, Mary-Kate and Ashley), we’re not promising you’ll get some unexpected drop-ins or odd covers, but Kanye himself told us that Aziz Ansari might sit in on the drums … OK, but seriously, the band does promise that the Horn Dog Millionaires (the horn section and drummer employed on the EP) will be joining in. Vessel opens the hairy good time. —Peter Berkowitz

For their first ever Oscar party, the Louisville Film Society promises to get excited about things other than annual winner Jennifer Lawrence. Like George Clooney — he’s also, technically, originally from (northern) Kentucky (Cincinnati, really. I mean, c’mon …). But let’s also turn the local spotlight on the LFS, who have brought many rewarding films to town over seven years, and have now moved into their new Portland headquarters (at the corner of Gill & Holland). That $50 might seem steep for, well, most things. But here, it gets you an entire year of LFS membership as well as a ticket to the Angie Fenton-hosted party, the Super Bowl for people who prefer to not care about the Super Bowl. There’s food, drinks and auction prizes, too. And the winner is … you? —Peter Berkowitz

Author and social justice activist Urvashi Vaid is making a stop at U of L on Tuesday to speak about the current state of the gay rights movement. A leader of gay rights for more than three decades, Vaid’s lecture is titled “Winning the Future: A Critical Look at the LGBT Movement.” Vaid is the director of the Engaging Tradition Project at Columbia Law School’s Center for Gender and Sexuality Law and has published books and essays and was a columnist for The Advocate. “We built a movement that fought for freedom in the way that Walt Whitman wrote of it,” she said at a Princeton speech earlier this year. “The freedom to live whole lives, to be seen by our society as valued comrades, as equals, as friends.” —Sara Havens

The curtain at the new Alley Theater will be lifted Tuesday for something equally as strange and compelling as the quirky local theater company — the Pretty Things Peepshow. The touring burlesque/sideshow act features sword swallowers, famous pin-up models, belly dancers, magic, a human blockhead, little people and lots more. The folks behind the Peepshow will attempt to merge the dark, seedy side of carnival sideshows with the sexy, flirtatious ways of classic burlesque. It’s an interesting choice that Alley Theater picked this event to show off their new 90-seat venue at 633 W. Main St., but from the looks of their upcoming season, there are a lot more surprises in store. —Sara Havens

Don’t judge a book by its cover or, in this case, art by its creator. “In Our Eyes” is a group exhibition by studio artists such as Billy Cogswell, Donny Moman and Jennifer Luvisi at the recently renovated Creative Diversity. “This show sets an example of how a person diagnosed with a disability might see the world and translates it to the public through the process of creation,” says executive director Bronwen Harris. “Artists here have the freedom to work on projects of their choosing, resulting in a vast array of colorful works featuring landscapes, pop culture, emotional abstracts and wildlife, to name a few.” The Creative Diversity Studio will be open during the Feb. 28 FAT Friday Trolley Hop. The works in the exhibition are for sale. —Jo Anne Triplett