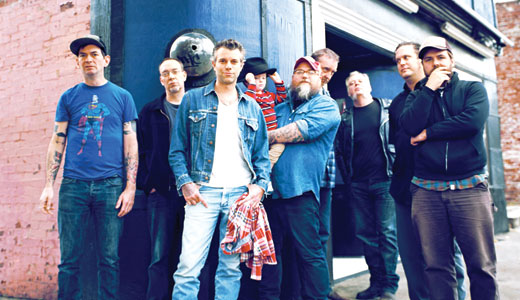 Lucero is so popular in Louisville, you’d be forgiven for not knowing they call Memphis home. The soul-country-rock band, currently an octet, returns Monday for what will be a packed heat wave of a winter show benefiting Big Brothers Big Sisters of Kentuckiana.

The BBBS idea came together when Lucero, about to hit the road with the Boston-based Dropkick Murphys, saw an opportunity to stop in Louisville for a show on their way up north. “It wasn’t too long ago that we’ve been in Louisville, and we usually play at Headliners up there,” says singer/guitarist Ben Nichols. “This time, we wanted to do something different, and we wanted to play some place a little smaller and more intimate.”

Once the band decided to make the show a benefit, their booker set it up with BBBS. “I’m looking forward to it,” says Nichols. “Louisville’s always a good time.”

It’s another step toward maturity for the veteran band, which has stepped up their live game in recent years with the additions of horn men Jim Spake and Scott Thompson, players whose credits range from Jerry Lee Lewis to Al Green and Cat Power. “They just know so much about Memphis musical history, and they’ve actually been a part of so much of it,” Nichols says. “Having a couple of guys like that in the band, it’s a big compliment that they’re in the band in the first place — and then just getting to hear their stories is super cool.”

In a roundabout way, their presence has also helped Nichols get healthier and start a new chapter in his own career. “Getting to play with guys that are this good, I don’t want to fuck it up,” he continues. “I’d rather play a more sober show and play better and have more fun, rather than just getting too drunk and screwing it all up. We did that for the bulk of our career, and so now I’m having fun really playing the music.” It’s still a process, he says, “but the more well behaved I am, then the more fun I have.”

Lucero has always been aware and inspired by Memphis’ insanely rich musical history, and Nichols has recently been reading “Respect Yourself,” the legendary music writer Robert Gordon’s latest love letter to that tale. “There’s plenty of history and plenty of stuff to get you excited about playing music and writing songs and being in a band,” says Nichols. “There’s plenty of Memphis history. It definitely keeps the band going and inspires us, for sure.”

Another reminder of their place in history came with the 2010 passing of former Big Star singer Alex Chilton, who had employed saxophonist Spake in his band. Members of Lucero paid tribute to Chilton at SXSW, and the older band’s documentary, “Big Star: Nothing Can Hurt Me,” was made available for home viewing so recently that Nichols had not seen it when we spoke. “I just added it to my (Netflix) list. I’ll watch it soon.”

Nichols is less certain people would want to see such a film about his band, noting that some footage was filmed in 2000 and ’05. “There’s plenty of old live footage of us out there. There’s a couple of documentaries that have been put together. We’ll see, maybe one day in the distant future there will be a more comprehensive film, but I don’t know … I don’t know if anybody would want to watch that,” he laughs. “We’ll see how the next 10 years go.”

While they work on that decade’s new songs, next is a live album, recorded last fall in Atlanta, providing a document of where the band is at today. A good intro for newcomers, it also offers longtime fans souvenirs of how some of their older songs sound now with horns and keyboards added to the arrangements. “It’s just kind of ingrained in what Lucero has become … hearing what (the newer members) bring to the old stuff has always been really fun, and they definitely do bring a new life to some of the old material.”

“It has just started to feel really natural with them,” Nichols says, “and it wasn’t something that was just kind of pasted on top of Lucero.”