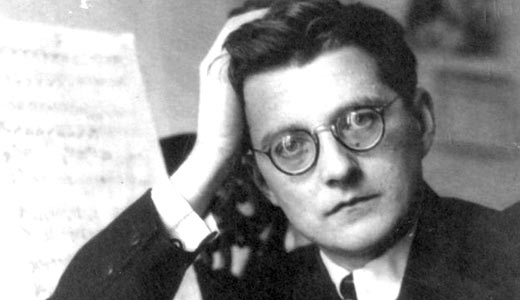 All his life, Dmitri Shostakovich rode the dangerous currents of an artist’s life in the public eye in the Soviet Union. Born in 1906, he was a child when the fighting of the Russian Revolution surrounded his home city of Petrograd, and just 19 when his “Symphony No. 1” found notice outside Russia, performed and recorded by important conductors in Europe and the United States. Notice abroad created notice at home, and Shostakovich soon drew the attention of Soviet intellectuals and Communist party propagandists. By the 1930s, the young composer had become a favored artist of the Soviet Union. Word got out that Shostakovich was, in fact, Josef Stalin’s favorite composer.

Which could be both good and bad for a career. Good, that the big orchestras of Moscow and Leningrad played his music. But bad when the music became entangled with Marxist-Leninist ideology. An out-of-favor Russian composer could suddenly find himself just as eligible for a trip to Siberia as an out-of-line Red Army general. Mild-mannered, glasses-wearing Shostakovich was much more interested in his music and following the sports news than he was in playing politics on the Soviet Union’s world stage. But here he was: Stalin’s favorite composer. And who could say no to Joe?

This week, the Louisville Orchestra — under the baton of new music director-designate Teddy Abrams — reaches back to that turbulent time to perform Shostakovich’s “Symphony No. 5,” written in 1937. Also on the all-20th century program is John Adams’ “Chairman Dances” from Adams’ 1985 opera “Nixon in China.” Guest soloist Inon Barnatan performs Maurice Ravel’s “Piano Concerto in G” (1931).

Twice in his life, Shostakovich was officially denounced, but each time he managed to regain favor. Once, under pressure, he withdrew his “decadent” “Fourth Symphony” from performance — and it just sort of … went away. But when his “Fifth Symphony” (the one the Louisville Orchestra is playing) was officially connected with the 20th anniversary of the Soviet Republic, Shostakovich was back in business.

During World War II, Shostakovich composed the “Leningrad Symphony,” which was smuggled out of that German-sieged city in 1942. The score was photographed on microfilm, flown to Turkey, then on to Tehran, and finally to London. In the United States, Arturo Toscanini and the NBC Symphony Orchestra broadcast the “Leningrad Symphony” live over the NBC radio network and by short wave around the world. The story, as much as the music, riveted audiences.

Twenty years later, at the height of the Cold War, it was the West that blackballed Shostakovich, a member of the Communist party. American symphonies stopped playing his compositions, and kids growing up in the United States in the 1960s, playing in high school bands and orchestras, never heard his name.

Today, Shostakovich is back in favor again. The composer died in 1975, as his music was being “rediscovered.” The Berlin Wall came down and orchestras everywhere now play Shostakovich’s music as if he’d composed it all on some South Seas island.

Beginning with the “Fifth Symphony”’s opening notes, this is Russia: cold, brooding, vast. Blocks of dark gray notes in the low strings, with tiny screeches in the high strings. In fact, screech isn’t the right word. It’s a thinner sound, somewhere out on the edge. If there was a word “skeen,” that would sound more like it. High strings skeening on the edge of madness. Begging maybe. Then gone, as the wind shifts.

The symphony has a standard four movements but nothing is about form and theme development. Shostakovich is creating color. Emotion. The music swells and diminishes. Thuds sometimes, then skeens off.

The second movement is fun. There’s a neat passage where the strings lay down a little tremolo, and bassoons dance about on it.

But in the third movement, those high violin notes are back — like rosined bows touching electrical wires. Up in the cold, where winds might carry them off to be heard somewhere else. And sounds that seem like faint lights on a below-zero night. Indistinct glows. A frozen fairyland, slightly out of focus. A clarinet sings a note that’s so sharply sour it puckers your lips.

When the drums finally pound again to begin the fourth movement with a march, it’s almost a relief. But nothing is squared and centered. The march keeps shimmering off into phantasms of music. Like a rush. And it doesn’t get resolved so much as it just ends with a standard grand fanfare — like the closing ceremony at the Winter Olympics. The colors all go home ’til next time.