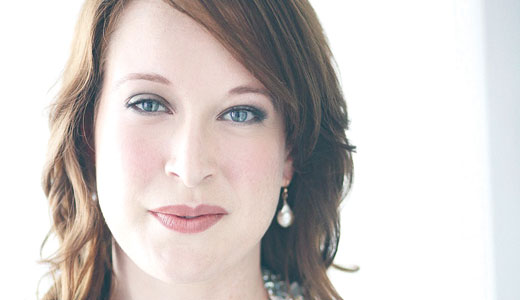 Even opera buffs have to shake their heads sometimes over Grand Opera’s notoriously improbable plot lines. But French composer Charles Gounod, who had seen several of his operas fail from plot malfunction, was taking no chances with “Roméo et Juliette.” Gounod and his librettists went straight to Shakespeare and followed the Bard’s famous play pretty much scene for scene, and verse for verse — including right out onto the balcony where Juliette sings out Roméo’s name, thinking, What rose we call by other name, would smell as sweetly?

The result, when set to Gounod’s lyrical orchestrations, is an opera that has the feel of a play. And that’s very much appreciated by soprano Ava Pine, who sings Juliette as Kentucky Opera presents “Roméo et Juliette” Friday and Sunday in the Brown Theatre.

“As an actor — and I do call myself an actor, as well as a singer — the most rewarding thing we get to do is play a character who has a real arc, a character who changes,” says Pine. “And as far as change goes, it doesn’t get any more dramatic than Juliette.”

“Roméo and Juliette” is, perhaps, THE classic romance: Young lovers from feuding families. A love that can never be, but blossoms nonetheless — ever-destined to end in tragedy.

“Juliette,” says Pine, “is a girl — in every sense of that word. She is just finding out how wonderful it is to be young and carefree and beautiful. And how wonderful to have men kiss your hand and acknowledge you. She’s just reveling in all that.”

“And then she falls in love and realizes there are experiences and feelings beyond herself. She becomes truly aware of the conflict between her family (Capulets) and the House of Montague. She had never really had to consider that. But now she does.”

Roméo well understands the rivalry of the families, but is completely stricken with love.

“Roméo’s heart is pure, and his intentions always follow his heart,” says tenor Vale Rideout. “But there is also a growing sense in him of his responsibilities in the world. I think that is the beautiful thing about him.”

The lovers find themselves trapped in their families’ conflict, yet swept away by passion.

All that makes for terrific duets — of which there are four with Roméo and Juliette that mark the signposts of the tale’s journey — from ball, to balcony, to bedroom, to Juliette’s tomb.

The tension of the tale affords stage director Danny Pelzig an opportunity to sweep glittering action across the ballroom floor, or move in close in the tomb — with a sharp knife and death all around. Pelzig is a veteran New York stage director and choreographer, whose long list of theater credits includes a stint directing ABC’s “One Life to Live.”

“One of the things I’m trying to do in collaboration with the singers is bring a real complexity to these characters Shakespeare had on the page,” says Pelzig in an appearance on WUOL-FM’s “Lunch and Listen.” Pelzig notes that choreography helps bring the characters alive. “I believe you can tell more about somebody by the way they walk across the stage than through an entire monologue.”

Pine says she is always thinking about the action that goes with the singing. “It’s incredibly hard work, and an incredibly athletic activity — though there are times of high emotion when I just have to focus on the singing.”

Timing is increasingly emphasized in opera today. But the singing remains paramount.

“You have to think about what the music is doing and what your body has to do to create that — while you’re singing it,” Pine says. “So the musical outcry that happens at those pivotal moments is totally in step with the drama.”

Easier said than done, she laughs.

“There’s a great quote from the singer Richard Cross. He said, ‘Opera is hard. You have to swear eternal vengeance — while keeping your jaw relaxed.’”

Of course, there is a swordfight. Stéphano, a sidekick/page in Roméo’s posse, helps stir up a street brawl with the Capulets. Raquel Fatiuk takes the role of Stéphano, which is written by Gounod as a mezzo-soprano singing in the high voice of a teenage boy.

A more peaceful character is assigned to basso-baritone Gregory Rahming, who sings Frère Laurent, the kindly priest who consents to marry Roméo and Juliette, hoping their marriage will help end the conflict between the rival families. Rahming is appearing with Kentucky Opera for the first time since his operatic debut here 25 years ago.