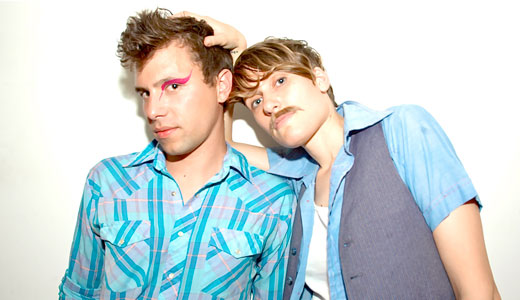 Saturday nights often present a dilemma for those looking to get out — do you grab dinner and a movie, or dinner and a concert? The Rudyard Kipling will help you solve that problem Saturday by featuring an event that involves both — a screening of “Out Here,” a documentary about LGBTQ farmers, followed by live music by Philly/NYC folk duo My Gay Banjo. Made up of Owen Taylor and Julia Steele Allen on guitar, banjo, uke and vocals, My Gay Banjo is touring in support of the newly released Country Boys in the City, a collection of homespun gay-themed duets. “Out Here” director Jonah Mossberg will join the duo at the Rud as well. LEO caught up with My Gay Banjo, who preferred to answer our questions as a team.

LEO: What makes your banjo so gay?
My Gay Banjo: Our banjo first realized it was gay when it started singing Shakira with abandon.

LEO: What can people expect from your show?
MGB: People can expect jokes, small talk, gay love songs, occasional mash-ups, at least one sing-along and some gay farmers!

LEO: You’re coming through town to promote your new album and screen the documentary “Out Here.” Can you tell me a little bit about both projects?
MGB: Our new album is called Country Boys in the City. It’s exciting for us because we were joined by a lot of really talented musicians and recorded it in a great studio. The title track sets up one of the main themes of the album, which is where we as queers and outsiders find home (“Country Boys,” “Sister Moon”). Another theme is about resistance and collective action (“Hero’s Tragedy,” “How Many Kinds of Courage”). We’re proud of the album and look forward to sharing it with the good people of Louisville!

“Out Here” is a full-length documentary film created by the Queer Farmer Film Project. It looks at the experiences of queer farmers in both rural and urban areas across the country and asks: “What does it mean to be a queer farmer?” “Is agriculture a safe space for queer people?” “What are the relationships between food production and queerness?” The movie focuses on seven queer farms/farmers from Berkeley to Alabama, including Sandor Katz, fermentation expert and author of “Wild Fermentation,” and Karen Washington, NYC food-justice hero and former president of the New York City Community Garden Coalition.

LEO: How has the tour been so far?
MGB: One reason we love touring is because it restores our faith in humanity. Everyone is so nice to us. Gay or straight, we get a real warm welcome. It’s also great to play with local bands and get to know a little bit more about the places we pass through.

LEO: Do you think the banjo is under-appreciated in today’s society?
MGB: The banjo is really making a comeback. The gay banjo is a lesser-known banjo, but world, get ready.