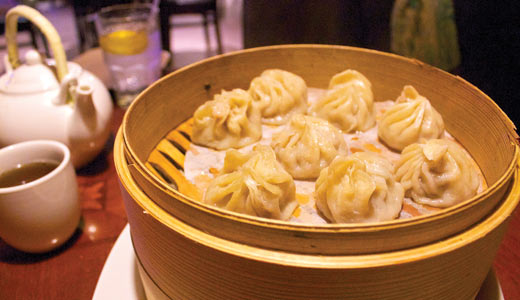 I just got back from New York City. When I go there, I like to imagine myself as Anthony Bourdain. I search high and low for new culinary experiences and just about double the capacity of my stomach. I eat all day. While the copious walking helps mitigate some of the copious eating, I inevitably come back to Louisville considerably plumper.

This time, it was hard to get a lot of walking done because of the onslaught of snowstorms. I ended up venturing out for specific cravings when my stomach and appetite overruled my desire to stay warm and dry at home. One craving that would pull me from my hermitage was a perfect winter snack I discovered last year when I ate my way through Queens. The devilishly tempting snack that seduced me into numerous blizzards is called xiaolongbao, also known as “juicy buns” or “soup dumplings.”

Soup dumplings are originally from Shanghai. Like any dumpling, they have a tender outer skin and are filled with either pork or sometimes crab or shrimp. The difference between soup dumplings and your everyday dumpling is obviously in its name. While the meat filling isn’t much different, a soup dumpling is also filled with a savory soup. They always come steamed and are placed in front of you piping hot with a side of black vinegar. To eat, you carefully take the dumpling out of the steamer and place it in your spoon. You have to be careful not to rip the skin or you’ll lose all the soup inside. Then, drizzle with black vinegar and nibble off the top and sip out the molten soup inside. Make sure you blow on it a little before digging in. After you’ve sucked out all the soup, devour it like any other dumpling. It’s not only a delicious bundle of joy, but also an amazing winter comfort food.

When I returned to Louisville, I immediately scoured the Internet for the possibility of soup dumplings locally. I was chagrined as I read different forums where soup dumpling fans like myself failed to discover these delights here at home. Then one icy, cold winter day, I struck gold during one of my scouting expeditions. Two places in Louisville now carry xiaolongbao — The Joy Luck at 1285 Bardstown Road and Peking City Bistro at 12412 Shelbyville Road. Hallelujah!

So on this winter day, I dragged a willing comrade far down Shelbyville Road to The Peking City Bistro. We sat down in a small, comfy booth and flipped through a large menu. There is a regular menu and an “authentic” menu that lists delicacies for a more adventurous palette. I was excited to see many unfamiliar things to try, like “beef gristle with chili sauce” or “preserved cabbage with pork soup.” They even offer free-range chicken dishes. We ordered soup dumplings (spelled xiaolungbao on their menu), steamed vegetable dumplings, eggplant in garlic sauce, and Singapore-style noodles.

Unfortunately, the soup dumplings were a little disappointing. The dumpling retained the flatness on the bottom when lifted from the steamer, which clued me in before my first bite that there was very little soup within. Normally, the bottom of the dumping will sag slightly from the weight of the soup. The shell was a little tough and hard to delicately bite into without losing the small amount of soup. It was still a good savory dumpling, although not really distinguishable from any normal pork dumpling. The rest of our entrees were also good — the eggplant was perfectly cooked with an umami-packed brown sauce that was slightly sweet and, despite its name, pretty moderate on garlic flavor.

Two days later, I found myself rushing to the opening of The Joy Luck, a new restaurant located where Kashmir Indian Restaurant used to be. I had spied on their online menu that they carried pork buns and soup dumplings. To my surprise, I was their first customer. Owner Alvin Lin was impressed I came squarely for the soup dumplings. He and his mother Pauline both expressed how not a lot of people in the area know what they are.

The Joy Luck offers an array of Chinese and Taiwanese dishes and many familiar favorites like General Tso’s Chicken and Kung Pao Beef. They also have some unique selections like the Formosa chicken roll, Taiwanese pork tapas and Lin’s childhood comfort food, braised pork over rice. Then there are the soup dumplings.

I placed an order for soup dumplings ($7) and an order of pork buns ($8). The dumplings came four to an order in a tin steamer and were served piping hot. The shells were tender, but again, they were a little shy on the juice. Pauline assured me that next time, they would be soupier, but since not many are familiar with the dish, they had used caution on the amount of soup. Despite not being as soupy as I’d hoped, the dumpling was quite tasty. It was the pork buns, however, that I actually enjoyed more. They also came out steaming and had a slightly sweet aroma. I thought I detected a subtle anise smell. Lin explained that all their food is made from scratch, including the spices that are mixed in with the meat and the shells on the dumplings and pork buns. I plan to return to try more of the menu and also to try their craft cocktails that will be available once their liquor license comes through (which I was assured would be very soon).

Perhaps we still aren’t a soup dumpling destination, but I have a lot of faith in our culinary scene and am optimistic it will happen some day. For now, I have a renewed excitement at the variety of Chinese dishes I have unearthed while on my soup dumpling expedition. I imagine I’ll be back to the Peking City Bistro and The Joy Luck. I always recommend trying a place a few times, especially if they have a robust menu. Next time, I’ll likely avoid the soup dumplings and ask the owners for their recommendation. I can’t wait for some braised pork over rice or preserved cabbage with pork soup.