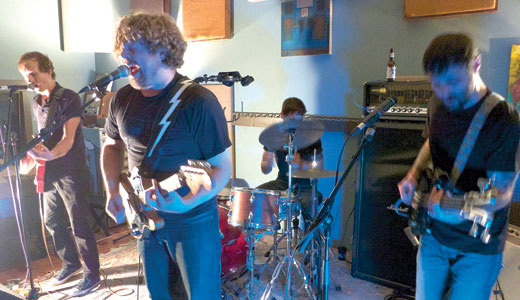 When is a supergroup not a supergroup? In the case of The Sands, it’s when the band’s members have all played in bands who are mostly famous in Bloomington, Ind., and the most famous member of the band is known, if at all, for a reason that has nothing to do with music.

Going on tour for a week now is a treat for The Sands, 30-ish guys who have more obligations than ever these days. They tried it once before but “… everyone was so busy, so (on) what was supposed to be a five-day tour, we ended up having to come home every night (across Indiana and Illinois),” says Mike Bridavsky, the band’s bassist, a recording engineer and the aforementioned most famous member.

This tour will be different, if for no other reason than they’re going farther, all the way to places like Raleigh, N.C., where guitarist/vocalist Jason Evans Groth (ex-Magnolia Electric Co., The Coke Dares) has started a new career as a librarian. It’s a long way from Bloomington, and a long way from how the band started.

“We were actually a Wipers cover band,” Bridavsky says. While that Northwestern melodic punk band has been a favorite of numerous musicians and critics through the years, it wouldn’t have been an obvious start for The Sands’ members, whose collective band identities had been harder-edged. But “we all shared a love for the Wipers, and we all thought it would be cool to form a power-pop group.”

The official reason for the tour is to promote the band’s new album, Hotel and Casino, recorded last year at the studio Bridavsky owns in Bloomington, Russian Recording (where Louisvillians such as Natives and Lucky Pineapple have also made records). The album is out this week through California’s Burger Records on cassette, vinyl through the Bloomington labels Houseplant and Let’s Pretend Records, and on CD by the Japanese label Waterslide. Despite the cross-label release, each format will be limited to 200 copies each.

“We’re not a very functional band, now that Jason’s moved,” Bridavsky acknowledges. “We only do it because we like each other’s company. We like playing music, and that’s really what we’re in it for.”

Bridavsky and drummer Josh Moore previously played together in the band Memory Map, and guitarist/singer Jeff Grant played in Pink Razors and Fat Shadow. Supergroup? “I think we’re just a group,” says Bridavsky, “a rock group of guys who are friends … I know people like Magnolia Electric Co., but aside from that, I’m not sure what bands people actually know.”

More people know Bridavsky’s cat, who was recently involved in a headline-making music story when she participated in WFPK DJ Sean Cannon’s charity-driven remake of “The Super Bowl Shuffle,” which also featured a handful of indie rockers and comedians. Bridavsky’s role came through supplying sound clips of his cat, Lil Bub, who has become an Internet celebrity, starring in a web series, a documentary, a book and, this Saturday, in her own Animal Planet special.

Cannon had interviewed Bridavsky not long ago about his odd new double life. “Especially for charity, something that’s fun and cool like that, we’re always happy to do it,” the musician and cat dad says. “I just have a collection of Bub sounds we use all the time for our shows, and I was, like, ‘Oh yeah, I can send you that if you want.’ I was really pleased with how it came out. I thought it was pretty funny.”

Bridavsky has mostly tried to keep Bub’s business separate from his normal music world, but, “At this point, I don’t think it’s possible anymore,” he says. “It’s fine, you know, people just yell my cat’s name all the time. Honestly, I just mostly feel bad for my bandmates … it’s my cat that’s famous. I’m just famous by association.”

Tours like this provide an opportunity for the members of The Sands to get away from everything else, spending time together as friends and making music — “fart a lot, make some jokes, get drunk, play the show,” he clarifies. “I don’t think anyone’s trying to make money or become famous or anything,” Bridavsky says. “Yeah, I think we all treat it like it’s some vacation.”