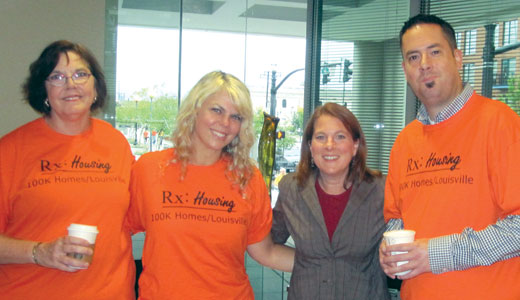 Two years ago, volunteers with the annual homeless street count found 150 people tucked away in those places that are easy to forget about — alleyways, overpasses and tents alongside the river. Last year, only 63 were found, a dramatic decrease homeless advocates attributed to the punishing weather. That night was declared a “white flag” night, meaning temperatures were below freezing and emergency shelters were approved to let people in even after they’d filled all their beds.

At this year’s street count, which was held during pre-dawn hours last Thursday, the numbers held constant. The 166 volunteers who canvassed the city found 70 people. Though it was a “white flag” night again, homeless advocates and return volunteers noted it was significantly less windy.

“Last year, we weren’t sure if it was the wind that drove people away from camps or if we were getting better at housing people,” says Susanne Binford, the unit manager at Seven Counties who organizes the homeless street count for the Coalition for the Homeless. “With the similar count (this year), I am wondering if maybe the housing program is finally seeing results.”

Natalie Harris, executive director at the Coalition for the Homeless, thinks so. “There’s been a big investment in the chronically homeless,” she says.

City shelters collaborated to launch a shelter reservation system accessible via phone. It helps prioritize people looking for shelter and offers referrals to other community services. Hospitals and jails have utilized it to ensure recently released people don’t automatically go back to the streets. Wait times at shelters have decreased.

The U.S. Department of Housing and Urban Development and Veterans Affairs Supportive Housing program, or HUD-VASH, and other veteran-specific programs have brought increased support for local veterans over the past few years. Mayor Greg Fischer’s office reported a decrease in the homeless veteran population by 20 percent in the last year.

University Hospital launched a program that assisted emergency room “super-utilizers” in getting basic housing and health care needs addressed so they would stop using the ER as their only source of medical interaction.

The state’s Medicaid expansion also brought health care to nearly all of the homeless population, provided they are citizens. (Prior to expansion, only 15 percent — mostly single women with children — were eligible.)

The programs reflect a broader change in public attitudes toward addressing the chronically homeless. The mindset used to be that housing assistance went to those who’d proven committed to bettering themselves by entering rehab or counseling and staying out of trouble. Now, advocates and policymakers have wised up to the fact that many cannot address secondary issues like mental health until they have the basic need of shelter filled.

“When you’re out there just surviving, it’s hard to focus on anything else. You’re worried about people taking your stuff. You’re worried meds will make you too sleepy,” explains Binford.

The chronically homeless, defined by HUD as someone who has been homeless for a period of one year or longer, make up about 15 percent of the total homeless population. They are often the ones with complex issues that need addressing. Investing more in them upfront saves money overall through things like ER visits and court interaction.

Under an overpass in Portland, homeless street count volunteers find a sleeping veteran. His name is Victor. He’s lived on the streets for 16 years, which is four times longer than average for the chronically homeless. He goes to St. John’s every day to shower, but he doesn’t like to stay in any shelter overnight.

“I’m an outdoors person. This is nothing,” he says of the 17-degree weather, adding he doesn’t like the crowds and he worries about catching a cold at a shelter.

To gain more insight like this, volunteers of this year’s street count asked every person who consented six pages of questions about health, wellness and services used. The Vulnerability Index and Service Prioritization Decision Assistance Tool, or VI-SPDAT, was used in 2011 during the launch of Rx: Housing. Now, organizers are planning on utilizing it each year in an effort to stay updated on the chronically homeless and reach out to the newly homeless.

ThinkProgress recently examined HUD data and determined Kentucky was one of the five states that have most improved their homelessness numbers since 2008.

This report did not take into account the Healing Place, which late last year decided to stop participating in white flag and focus on their primary function as a residential drug and alcohol treatment program. That change has resulted in an influx at the three remaining emergency shelters — St. Vincent De Paul, the Salvation Army, and Wayside Christian Mission.

For homeless advocates, it’s a reminder that, even with promising reports on their work, they can only ever be cautiously optimistic. Federal funds are still being cut for homeless programs. This frigid winter, which has had more below-freezing temperatures than average, has depleted white flag program funds. Advocates are already brainstorming on ways to recapture funds and continue their work.

“We have so far to go. The reason why we’ve gotten as far as we have so far is cooperation,” says Harris, meaning the constant interaction between the Coalitions’ 30-plus members. “We are always asking: How do we make sure (the homeless) get all the services they need?”