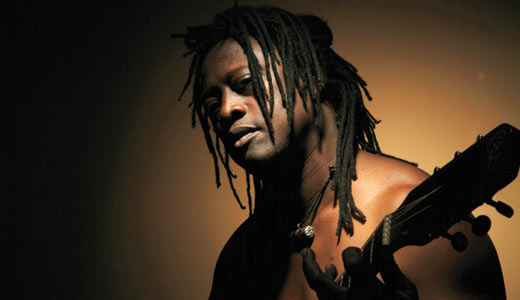 It’s been a decade since Malian bandleader Habib Koité was last here, enticing the audience at the Bomhard Theater to leave their seats and dance, which seemed to energize him and his band. Since that time, Koité has continued to tour and record, bringing his socially conscious and highly rhythmic music to fans around the world. Gary Pahler, drummer for Louisville’s own Afrobeat band the Afrophysicists, says, “This is a rare opportunity for Louisvillians to witness his incredible music in person. He’s simply a one-of-a-kind West African singer-songwriter you won’t want to miss.”

Koité is part of the Khassonké griot tradition in Mali, a West African country also known for such musicians as Ali Farka Touré, the band Tinariwen and more. Both his parents were musicians, and he began to play music as a child. His primary instrument is the nylon string guitar, although he has taken up banjo recently, especially following his 2012 collaboration with Eric Bibb for the album Brothers in Bamako.

He spoke with LEO from his hotel in Denver, an early stop on his frequently sold-out tour to promote his new album Soô (“Home”). Asked if he changes his music for audiences away from home, he says wherever he is, whether in Mali, Europe or the U.S., he plays the same music, not altering it, except for time limitations while on tour. “Most of the shows we give in Mali are all-night shows, not (like in the U.S.), where people come for an hour-and-a-half and then go home. There, they can eat, they can drink, we can play longer.”

Similarly, in reference to his collaboration with Bibb, Koité emphasizes he did not alter his playing. Rather, “I played what I play, and he played what he played. Sometimes we were surprised how the songs came from different parts of the world but came together. I enjoy the banjo very well. The banjo from America is like our n’goni.”?

Koité discusses his current touring ensemble. “This is my second band. I created it to make the new album, to make something new. I play my classical, nylon-string guitar, banjo and sing. The banjo player sings and plays guitar, too. I have the bass player from my first band, who also plays kamele n’goni (a “young man’s harp,” frequently with six strings). Behind me is a percussion player, who plays calabash, djembe (a large, single-headed drum) and other instruments. There’s our keyboard player — he plays the sounds of the kora (a cross between a harp and a lute), the sound of the balafon (a marimba-like instrument with gourd resonators), the n’goni, and bolon (a traditional Malian harp).”

Using the keyboards to bring forth these notes allows Koité to bring authentic sounds to his stage show without having to double the size of his ensemble.

As for the dance aspect, “It depends on how the audience feels,” he says. “Maybe the music for them is something that makes them get up and dance.” He expressed some concern that people not block others’ views, as has happened to him. John Harris, executive director of the Clifton Center, independently notes, “As for dancing, we’ll do our best to encourage dancing in the front of the aisles, but not in front of the stage so that people’s views are blocked.”?

A generous sampling of music from the current lineup with his longtime band Bamako is available on the 2004 two-album concert set, Foly! Live Around the World. Koité, unlike African artists known for styles such as juju or highlife, is known for “utilizing more of an acoustic approach, but with just as strong polyrhythms and with just as much energy, coming from a different perspective,” adds Pahler. “His music has a more rootsy, earthy vibe.”?

“I want the audience to watch and listen to the new songs — for those who know me from before, and those who discover me, I welcome everybody,” Koite says. “I move from Mali to meet them here; they must come to watch me, and we can make it a big thing.”