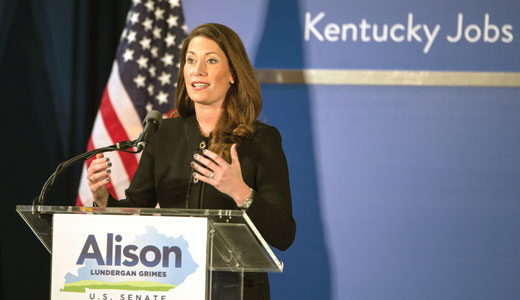 Noting that McConnell’s campaign has dismissed polls over the last six months showing him locked in a virtual tie with Grimes in the U.S. Senate race, Yarmuth said they’ve told reporters to just wait for the Bluegrass Poll, because that’s the one that matters. “Well, at 6 p.m. tonight, the Bluegrass Poll came out,” said Yarmuth. “Alison 46, Mitch McConnell 42.” The crowd roared, as they did throughout Grimes’ 40-minute speech outlining her new jobs plan for Kentucky and case to replace McConnell.

Last week was another sign that Grimes’ campaign, once thought of by many as a long-shot, is picking up serious momentum. Not only has Grimes been able to keep pace with McConnell in fundraising since she entered the race, the Bluegrass Poll (commissioned by several Kentucky media outlets) shows Grimes in the lead, and McConnell extremely unpopular with Kentucky voters. Only 32 percent approve of McConnell’s job performance while 60 percent disapprove, and only 25 percent have a favorable opinion of him, with 50 percent unfavorable. In fact, the poll showed McConnell’s numbers even lower than that of President Obama and the Affordable Care Act, which his campaign has attempted to tie to Grimes.

All the more remarkable, this turn in the race has happened despite McConnell’s campaign spending more than $7 million last year — along with his allied Super PACs filling the airwaves — and Grimes not even airing a single ad so far.

Grimes’ speech reemphasized policy positions that are widely popular among Kentucky voters – such as an increase in the minimum wage — but she steered clear of many specifics that political reporters have tried in vain to elicit from her since she entered the race. LEO sat down with Grimes for a short interview after her speech, and as you can see from the Q&A (link here), we were not particularly successful, either.

But from a cold, strategic standpoint, does she even have to at this point? Being the anti-McConnell candidate certainly has its upside, whereas sticking her neck out on trickier issues — certainly preferable to the majority of voters yet to form an opinion about her — might make her more susceptible to a torrent of attack ads. Most observers assume she’ll have to eventually, but the question is when.

Grimes’ speech in Louisville laid out her jobs plan she first unveiled in eastern Kentucky last month, outlining a populist agenda directly targeted at middle class voters and starkly in contrast to McConnell’s voting record. She reiterated her support for a minimum wage increase and equal-pay legislation for women, and once again tried to “out-coal” McConnell by saying she would fight for coal miners and against what she calls over-burdensome EPA regulation of the industry by the Obama administration.

She continued her anti-tolling rhetoric from last month’s jobs speech, arguing that McConnell’s lack of support for federal transportation spending will fall on the backs of Louisville commuters once the new bridges over the Ohio River are built. “It is a shame that the burden of financing this will be shouldered by local commuters,” said Grimes.

Grimes also advocated tackling the trade deficit with China and the country’s “currency manipulation,” hammering McConnell for supporting trade deals that have lead to the loss of manufacturing jobs in Kentucky. “Unlike Mitch McConnell, I will oppose the tax breaks and trade deals that send our good paying jobs overseas,” she said.

Her message could not have been stronger toward the rights of labor unions — whose membership was heavy in the crowd — criticizing McConnell for his support of so called “Right to Work” legislation that would make it harder for unions to organize. “I believe to the depths of my core that collective bargaining is a fundamental American right,” said Grimes. “I call it ‘Right to Work for Less.’ It’s just another way of union-busting.”

Grimes also called for an increase in federal funding for education, job training, research for “clean coal” technology, child care and infrastructure spending — while criticizing the sequestration cuts McConnell has championed — though her jobs plan is light on specific numbers for those proposals.

This is where Grimes’ lack of specifics raises a great number of questions from observers, and as you can see from our Q&A, it can be difficult for reporters to pin her down.

Grimes’ website highlights her support for a balanced budget amendment to the Constitution, yet without a dramatic decrease in federal spending, tax increases or cuts to entitlement programs such as Social Security and Medicare, most would assume that balancing the federal budget would be impossible.

Grimes’ campaign says that she does not deny the reality of climate change, but has not provided any kind of strategy to combat it, all while criticizing EPA regulation of coal-fired power plants. Asked about her position on the controversial Keystone Pipeline last Tuesday, Grimes gave LEO a non-committal statement.

The Trans-Pacific Partnership trade agreement currently being negotiated is highly unpopular among labor unions, but she has not taken a stance on it. She has come out against repealing the Affordable Care Act in its entirety, saying its flaws should be fixed and mandates delayed, but she has not directly addressed if the mandates should stay in place after this delay. Grimes took a bold stand in favor of the Employment Non-Discrimination Act in Congress and subtly signaled her personal support for gay marriage, but it’s not clear if she believes in marriage equality in all 50 states.

If you’ve observed Kentucky politics for any period of time, Grimes’ evasion on certain questions and specific policy issues — reverting into tangentially related talking points — should not be unfamiliar. Her opponent, Mitch McConnell, is widely regarded as the master of such a media strategy, often repeating the same talking point over and over when asked a question he’d prefer to not directly answer. When McConnell’s campaign knocks Grimes for refusing to address certain issues, the hypocrisy meter goes through the roof.

Prominent Democrats have praised the Grimes campaign for its surprising success in the Senate race so far, often complimenting her “discipline,” i.e., not going off message into unchartered and non-poll-approved territory. And if you just look at the poll numbers in the race – especially McConnell’s horrid approval numbers – it’s difficult to argue with that.

Grimes’ campaign wants this race to be a referendum on McConnell and a dysfunctional Washington, D.C., and if they get their wish, their chances of victory are good. However, if Grimes continues to dodge uncomfortable issues, observers have to wonder how long such discipline will remain an asset instead of a liability.

The Grimes Q&A: 8 minutes with the woman who could ditch Mitch