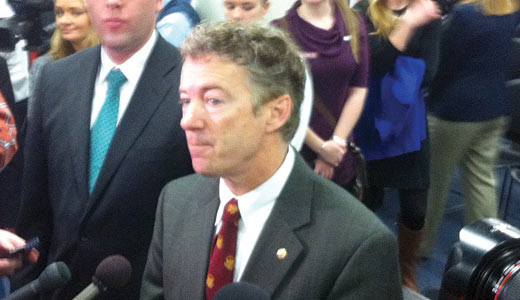 Sporting his signature attire of jeans and a blazer, Sen. Rand Paul took the microphone off the podium and walked to the edge of the stage, launching into his now-familiar rebranding pitch to the crowd of more than 100 Republicans.

After noting that those in the new club can sport jeans and a hemp shirt like himself, Paul said, “the new GOP has a lot of what was in the old GOP, but better. We’re going to be for things we’ve always been for, but we’re going to be louder, and we’re going to be in your face to say: We will defend the rights and liberties of all individuals, of all races, of all colors, of all creeds.”

This emphasis on racial inclusiveness was last week’s deliberate message from Paul, beginning with the senator’s testimony Wednesday in Frankfort before a Senate committee in favor of HB 70, a constitutional amendment that would restore the voting rights of roughly 180,000 Kentuckians previously convicted of a non-violent felony. That amounts to 1 in 17 Kentuckians, but as high as 1 in 5 African-American males.

Ahead of Friday night’s event, the Louisville GOP put an ad in the West End’s Louisville Defender bearing the picture of Abraham Lincoln, reading: “Finally … The Party of Lincoln is Listening,” with plans to soon hold committee meetings in that part of town.

But outreach to African-Americans remains a tough sell for Rand Paul — whose entry onto the national stage in 2010 involved his questioning of the 1964 Civil Rights Act — and the Republican Party, whom both blacks and Hispanics have recently run away from in droves.

Last week’s HB 70 vote highlighted that difficulty, as Senate Republicans at the last second attached what proponents called a “poison pill” to gut the bill of its impact, despite widespread bipartisan support in the General Assembly.

As Wednesday’s Senate committee began, Sen. Damon Thayer, R-Georgetown, presented a watered down version of HB 70, which had passed in the House last month by a bipartisan 82-12 vote. Instead of an automatic restoration of voting rights for non-violent felons who had served their time, Thayer’s substitute added a five-year waiting period after completion of time served to have their rights restored and permanently disqualified those who had multiple felony convictions or were found guilty of a misdemeanor during that five-year waiting period.

Ready to testify in favor of HB 70, longtime sponsor Rep. Jesse Crenshaw instead lambasted the gutting of his bill, arguing the substitute made 55 percent of the 180,000 Kentuckians set to have their rights automatically restored ineligible.

Sen. Paul awkwardly followed with his testimony — later saying that he hadn’t yet seen the committee substitute — highlighting the large number of African-Americans disproportionately incarcerated and disenfranchised by the drug war, but also stressing the need for a “compromise” to pass.

“As I’ve learned in my short time in politics, I don’t always get everything I want,” said Paul. “But there is some advantage to moving the issue forward toward what a lot of us are in favor of.”

Republican House Floor Leader Jeff Hoover — co-sponsor of HB 70 — also noted his concerns with the substitute bill, though advocated it be moved forward.

Raoul Cunningham, president of the Louisville chapter of the NAACP, then proceeded to rip the Senate substitute as a step backwards for voting rights.

“We find the Senate substitute not to be a bill that will restore rights for felons, but we find it to be a blueprint for suppression of felon voting rights,” said Cunningham.

Addressing these concerns, Sen. Thayer said he remains staunchly opposed to HB 70 in its original form and that Senate leadership would never allow a vote on it.

“I think there ought to be some level of gratitude that we are here today having this conversation,” said Thayer, drawing a chorus of gasps and jeers from the audience.

Despite the odd sight of no one testifying expressing their favor for the Senate substitute — including three Republicans — it passed unanimously out of committee. HB 70 supporters, such as Sen. Gerald Neal, D-Louisville, voted to move the bill forward in hopes that once the House rejects it, it moves to a conference committee where Thayer’s amendments are pulled from the bill.

“We’re not doing them a favor by allowing them to vote,” said Neal. “We’re doing ourselves a favor. We’re doing society a favor to bring people back into full participation, to be productive in our society. Why do we play this game? It makes no sense.”

In a press scrum after the vote, Paul argued that the substitute bill is better than nothing, saying, “I would think five years is a lot less than infinity, so it would be progress in the right direction. It’s not really my job, though, to tell the state Senate or the House what they should come up with.”

“But as I have raised children, sometimes when they get outside of my control, they tend not to abide by the rules or the norms that we have set in society or in the household,” said Stivers.

On Thursday, Paul took another step in the right direction by blasting conservative blowhard Ted Nugent for calling President Obama a “subhuman mongrel” and “chimpanzee,” calling for him to apologize.

At a press gaggle before his speech in Louisville Friday night, Paul had a slight change of tune when asked about HB 70. Paul said he preferred the original version of HB 70, but said the media unfairly portrayed the Senate substitute as “something horrible,” even though it wouldn’t be that bad.

“If this were to pass, even the Republican version, over 90,000 people would immediately get their voting rights back,” said Paul. “So I like to look at the glass half full.”

None of the other Republican speakers addressed race, including Sen. Mitch McConnell, who began the event with a short stump speech for Republican races this fall.

“You may not hear often in a crowd of Republicans people talking about the War on Drugs,” Paul told the largely white audience. “But I’m here to tell you, if you want to be the party of justice, you need to understand that the War on Drugs has had a disproportionate effect on people of color.”

After that line drew awkward applause, Paul lightly admonished, “Now, you’re supposed to clap when I tell you the solution.”

This Monday, Rand Paul spoke at west Louisville’s Simmons College during their announcement that the school has received national accreditation as a historically black college and university. This will make Simmons eligible for up to $300,000 in funding from the Department of Education.

However, Rand Paul’s proposed federal budget zeroes out all Department of Education funding, not to mention giant cuts to a long list of programs that are badly needed in the economically depressed and African-American section of Louisville.

LEO asked the Rev. Kevin Cosby — Simmons president and a strong ally of Paul’s — if he has talked to the senator about his desire to cut such federal education funds.

Rep. John Yarmuth, who also spoke at the event, told LEO that other attendees had mentioned this to Paul, and highlighted that Paul’s policy positions still have a long way to go to connect with black voters.

“I really appreciate Sen. Paul trying to reach out to minority communities.” said Yarmuth. “But ultimately, it’s actions and not words. And until people like Rand demonstrate an empathy and sensitivity and a willingness to actually vote for programs that help minority communities, then it’s just words.”