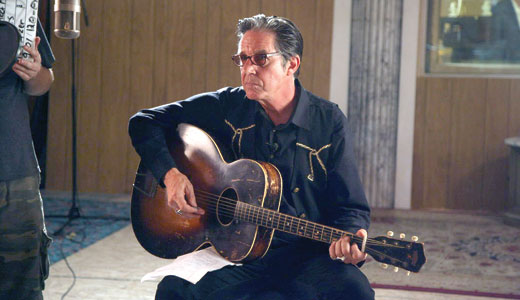 This month, the longtime-in-the-making debut film from Louisville production company 180 Degrees will finally hit the big screen. “Pleased to Meet Me” is the quirky story (based on actual events) of a musician (played by musician and actor John Doe), threatened with bankruptcy and a lawsuit from his record label, who turns to his lost love and former producer (Aimee Mann) for help. Together they assemble an eclectic band comprised of folks who have never met to collaborate for just one day. Their creative experiment offers them both one last shot at redemption. LEO caught up with director Archie Borders to discuss the movie.

LEO: Tell us about the gestation period for the project.
Archie Borders: I first heard the NPR piece, “Everyone Speaks Elton John” (on “This American Life”), in 2004. My then-business partner and I got the rights in 2005, nearly had the film financed three different times, only for it to fall apart — in 2007 and twice in ’08 — and then finally, with (producer/director of photography) Mike Fitzer, (co-star) Joe Henry and (co-screenwriter) David Henry’s help, pulled it together in 2011. I was tempted only once to give up. That was in 2010 and Mike said, “Screw it, we’ll make it for nothing if we have to.” Here we are in 2014, ready to watch it!

LEO: What was it about this story that resonated so deeply with you?
AB: In the original radio piece, (producer) Starlee Kine and (musician) Jon Langford — who both cameo in the movie — have one of those days anyone in the arts can relate to. You get these very different, creative people together for a short time, pool your gifts, bring all the drama and comedy that everyone has in them, and have this shared experience. When it’s bad, it is torture, but when it clicks, it’s magic. This film felt very much like the story we were telling. On the surface, the movie has a light, jangly quality, but if you look more closely, and especially on a repeat viewing, these are people who are in pain and having emotional transitions in their lives. Dave Henry and I really wanted to get into that.

LEO: Now that the movie is finished, what would you have done differently?
AB: You know, I wouldn’t do anything different. It’s a low-budget film whose funding was cobbled together from a bunch of sources: private equity, Kickstarter, our personal bank accounts. It was a long time from page to screen — and that ramshackle approach informs the film’s aesthetic. It feels like it’s supposed to (be) a bit rough around the edges with a heartfelt center, and with really amazing people in it. This is a film that feels very much like its construction. Kind of like a Butchertown shotgun house — no huge surprises outside, but, man, look what they’ve done to the inside.

LEO: What can we expect at the premiere?
AB: (Stars) John Doe and Karin Bergquist will both be there, as will all of the local cast. There will be Q&As, and I’m hoping, like when we did the “World Café” live (radio) show (in Philadelphia), that we can persuade John to pull out the guitar at some point.