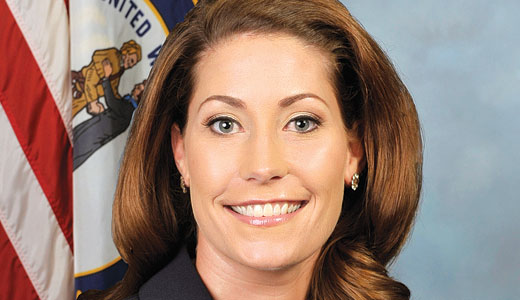 LEO Weekly: Are you for keeping the individual mandate in the Affordable Care Act, or would you rather get rid of that?
Alison Lundergan Grimes: Well, as I have said all along, especially since last year, I have my concerns with the Affordable Care Act. And it revolves around making sure we implement it the right way. I was the first in the field of Democratic incumbents and challengers to push for extending the grandfathering clause, so that when Washington politicians make promises — that you can keep your plan, you can keep your doctor — we stick by that. For me, it’s about implementing it the right way, in terms of making sure we are streamlining the process for our businesses so they are encouraged to provide coverage, and not repeal it. I’ve said all along that the delay of the employer mandate was a good thing. When it comes to the individual mandate, I have said that the delay — in light of the technical problems the website faced — was a good thing, because those individuals faced problems as a result of no wrongdoing on their end, but rather on a technically faulty website. I will continue to look out for the 640,000 Kentuckians who are at stake in all of this, individuals who haven’t had access to affordable insurance.

LEO: But after the delay, would you be fine with keeping the individual mandate?
ALG: Obviously I’m looking out for the best interest of Kentucky. Especially the 640,000 Kentuckians — who we now know 200,000 of which have access because of our Medicaid expansion. That’s where my head will be, and I will evaluate every decision in light of that.

LEO: What should the federal government do to combat global warming? Should there be some regulation of carbon emissions?
ALG: Well, I hope you’ve been a part of our jobs tour, as we have been in eastern Kentucky, northern Kentucky, here in Louisville, down in western Kentucky. And my focus is, obviously we have one world we want to leave in a better place than we found it. But we also have to realize that the state we’re in didn’t occur overnight. And we need to be cognizant and mindful of the economic impact, especially the over-burdensome regulation that has had and continues to have on the state of Kentucky. Reigning in the over-burdensome regulation that does nothing to protect our environment or our workers, but only goes to attaching more problems for operators of mines, and as well as to the financial and administrative responsibility associated with them. It’s unnecessary.

LEO: Do you have any concerns that the mining of coal right now in eastern Kentucky is done properly to avoid pollution that hurts people?
ALG: Obviously my first concern is to look out for the individuals who are looking out for the state of Kentucky, and it’s their jobs. The United Mine Workers were the first group to endorse me when I ran for secretary of state. I’ll stand by our workers, whether they be in our mine fields or in our manufacturing jobs.

LEO: Do you think the federal government should continue tax incentives for renewable energy companies, or should those be cut back?
ALG: Well, I think as long as we can look out for our environment, while also protecting economic prosperity that needs to exist, it would be a good thing.

LEO: I asked you about the Trans-Pacific Partnership (TPP) trade agreement (in December), and you said you were still looking into it. Have you come to a decision on how you feel about TPP, and whether President Obama should be given fast-track authority?
ALG: I will look at every decision when I’m in the U.S. Senate in terms of whether it is good and proper and fair for our workers, and most importantly, for Kentucky’s economy. And in terms of what you heard here tonight, when it comes to making sure we are leveling the playing field, especially internationally, for me first and foremost there’s nothing stronger, better, swifter, faster that we can do than make sure we are leveling the playing field with China right now.

LEO: But nothing specific on TPP?
ALG: It’s evaluating every decision in light of, “Is it good for the workers as well as the Kentucky economy?”

LEO: As senator, you would decide on Supreme Court justices, whether they are confirmed or not. Do you think states should be able to ban gay marriage, or do you think the federal government — whether that’s the Supreme Court or (Congress) — should bring marriage equality to all 50 states?
ALG: Well, the Supreme Court has already spoken on that issue, and they said state sovereignty rules. For me personally, I’ve been married to my husband now for seven years. With his gray hair it looks a little bit longer than that, but seven years we’ve been married. I wouldn’t want to deny anyone else that opportunity to make that same commitment. Obviously, churches (shouldn’t) have to recognize things that aren’t consistent with their teachings. For me, though, the Supreme Court has already ruled on this issue.

LEO: Tonight you mentioned spending for job training, education and infrastructure. And you also support a balanced budget amendment. How can you square all of this spending and also balance the budget? Because right now, we can’t balance the budget, and we’re already hacking spending for all of these things.
ALG: I think in light of curbing our $17 trillion debt we have right now, there are 17 trillion reasons why Mitch McConnell doesn’t need to be in the U.S. Senate any longer. We were at a point in time where we were scheduled to balance our budget, and most importantly, to curb our deficit. And now, because of the inability to focus and make people the priority, we have Mitch McConnell who sent all of our jobs, tax breaks and trade deals overseas.

For me, I think the way I will approach our federal budget and what I have talked about, especially in our jobs plan, is making sure we cut waste, fraud and abuse. We have hundreds of programs, especially as it relates to energy, across numerous agencies. We need to streamline things, as we’ve done, for instance, in the office of secretary of state. We need to make sure we’re spending smarter, and most importantly, eliminating the loopholes. That’s the approach I would take to balancing the budget. It is restrained, sensible spending, but also funds for, what I believe, are Kentucky’s top priorities, which you heard me talk about here tonight. Infrastructure is a big one I don’t believe should be on the backs of Kentuckians.

LEO: Would you be open to reforming Social Security or Medicare to a point where you cut benefits from either of those programs to make budget room in the long term?
ALG: I am running to strengthen and protect Medicare and Social Security. You saw me look out at my grandmother tonight, and it’s about keeping the promises we’ve made to the seniors across not just Kentucky, but across the United States.

Grimes’ campaign is picking up momentum, but is not being Mitch McConnell enough?