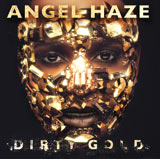 Not everything that comes in a shiny package does so to hide a lack of depth, but this is not the album the hard-hitting emcee’s earlier work led us to expect. Haze’s retail debut deceptively embraces poppier production and “big” sounds, but doesn’t trade down one bit lyrically, making for an impressive spoonful-of-sugar-makes-the-arsenic-go-down long player. Largely produced by Markus Dravs and Malay, surface listens may make you think the major label compromised her, but pay attention and see the infiltration of pop. Haze is unapologetically positive even in her aggressive delivery, itself refreshing in music’s generation-long cynicism. “White Lilies/White Lies” and “Battle Cry” supply the one-two punch for newcomers. The hasty digital release, due to her frustrated Soundcloud leak, will likely keep ears from finding what is deserving of a much larger audience than it will receive.