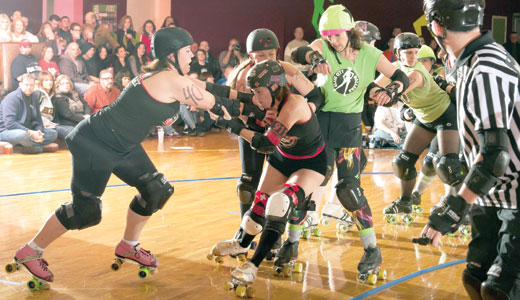 There is a saying in roller derby: It’s better to be knocked down than knocked up. The phrase speaks to the physicality of the contact sport, which for the uninitiated can look like a disorganized tangle of women playing bumper cars with their bodies while a ref circles around whistling and pointing at random players. It also speaks to the level of devotion the competitive sport demands from its players. Perhaps most importantly, the phrase is a reminder that, at least while in the rollerdome, this is a woman’s world.

To be fair, dudes can (and do) play roller derby. The Men’s Roller Derby Association has more than 40 member leagues across the U.S. and Canada. Still, women dominate the modern incarnation of the sport — and not just as players. An all-female board of directors set up and operates the Women’s Flat Track Derby Association, which is the sport’s international governing body comprised of more than 200 member leagues. Players sometimes boast that in no other sport outside of the WNBA do you see so many women involved from the top down.

At Derby City Rollergirls, the breakdown is no different. The female-owned-and-operated team was founded in 2005 as Kentucky’s first flat-track roller derby team. With some help from indie movie “Whip It” in 2009 and some old-school word of mouth, it has since grown beyond the headlining A-team (The All-Stars) to include a complete B-team (The Bourbon Brawlers) and a junior league (The Little Sluggers) for girls ages 6 to 17.

At a recent weeknight practice, the scope of this growing local sports nation has never been more evident. Tucked in one corner, newbies weave around orange cones, crouching while skating — a drill that builds the basic skills needed to survive in the rink. In the main portion of the rink, a practice game has commenced. There are enough players tonight that both teams have healthy benches. Coaches carry clipboards and call out encouragement. There’s a smattering of volunteers and supporters around, too, including at least one player on a pregnancy sabbatical.

Tonight is one of four practices that will be held this week. Each of the 38 active adult players is required to attend at least two a week or risk losing a coveted roster spot. Roller derby season runs February through July, during which the players will also be required to attend two games a month — one away and one at home. The demanding schedule hasn’t stopped women with time-consuming jobs and home lives from joining. There are tattoo artists and teachers, chemists and paper pushers, beekeepers and probation officers. Some don’t have children. Some do.

“You know when moms freak out about their sons wanting to play football? Now they worry about little Mary joining us,” jokes Gretchen Mueller, an A-team player who goes by the name Contract Killer.

In reality, concussions are rare. Sprained ankles and bruises are more likely, though a lot of a new recruit’s first year is devoted to hammering in safe playing tips. (Tip: Fall with clenched fists so your fingers don’t get run over.)

On Saturday, Derby City Rollergirls kick off their eighth season with a tripleheader at home. Titled “Back in Black and Red,” the milestone event will consist of the junior league’s inaugural bout, as well as mark the beginning of the B-team’s first complete season.

Last season the A-team went 4-4. Not a winning season, but it did include beating in-state rivals Vette City from Bowling Green and Black-n-Bluegrass from Northern Kentucky for possession of The Commonwealth Wheel. This season, the badass band of broads is determined to be even more competitive. One big motivator: the threat of a second Louisville roller derby team. A separate group of skaters attempted to form one last year. Although it never took off, it motivated the Rollergirls to capitalize on their natural momentum.

Of course, you’d be hard pressed to find audience members who attend roller derby matches for the long game of season records and rivalries. For almost everyone not listed on the roster, the real excitement is in the gameplay itself. A high-energy, fast-paced game that’s better watched than explained on paper, the short version is that points are scored when a designated player known as the jammer laps opposing blockers.

To this end, players who aren’t on the roster spend time in the audience explaining the game to anyone who cares to learn. Sure, there are silly names (Slim Beam is a crowd favorite), but beyond that, this is serious business.

“This is a team sport where women can be competitive,” says Amy Catt, the group president. “There aren’t a whole lot of those out there for women.”