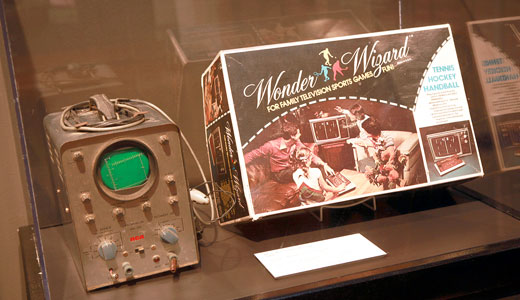 I spent a great deal of my childhood playing video games at Eastern Lanes bowling alley in Clarksville. Pinball, too. But the video games, stuff like “Asteroids” and “Galaga,” are what I spent most of my money on.

There was also another game I loved: “Pole Position II.” For a quarter, you could climb into a virtual Formula One car and take to the track to do battle with other racers. The game was challenging, but it was a blast because it felt like you really were in a race.

At “Pinball to Pixels: Classic Sports Arcade & Video Games,” presented by the Louisville Slugger Museum & Factory, Louisvillians can relive some of these memories. Admission to the exhibit is included with paid admission to the museum, and during the month of February, admission will be just $5 every day.

From the original “Madden NFL” (circa 1990) to “Mike Tyson’s Punch Out” to classic pinball games such as one paying tribute to Muhammad Ali, it’s truly like stepping back in time. And it’s stepping back to a time when memories are perhaps the best.

The exhibit came about when Anne Jewell, executive director at the Slugger Museum, took her son to the Louisville Arcade Expo. She saw all the sports games and got the idea for “Pinball to Pixels.”

In fact, she imagined an exhibit where people could “not just look at but interact with the games,” says curator Nathan E. Salvey.

That’s right, you can play the games as well as look at them.

Perhaps you recall the sit-down, two-player game “Track & Field”? Yep, that’s the 1983 Olympics-themed game from Konami. The exhibit has placed one of these vintage games in front of a wall-sized mural of a pizza joint, complete with corner booths and red-and-white-checkered tablecloths. Talk about going back in time.

The original “Madden” is another priceless trip into the past — pixilated players in generic football uniforms lining up to battle over a brown blob? Classic.

“At the time, these were the greatest graphics people had ever seen,” Salvey says.

Other arcade games include the aforementioned “Pole Position II,” “Double Dribble,” “Tecmo Bowl,” “Baseball Stars,” “World Cup” and “Sega Super GT.” For pinball lovers, there’s not only the Muhammad Ali machine, but also “Slugfest,” “Tee’d Off” and a couple of others. Console games range from “RBI Baseball” to “Ice Hockey” and are projected for play larger-than-life onto a gallery wall.

Why are these games so nostalgic?

“It’s competition,” Salvey says without hesitation. “People love to compete. It almost takes you away, and you can see the tangible results. It makes you feel like you could hit a home run at Wrigley Field or Dodger Stadium.”

“There’s nothing more fun,” he says, “than gloating to your best friends when you beat them at one of these games.”

“We’ve brought some of America’s favorite sports video games back together in one room where guests of all ages can play their favorites and settle old scores,” she says.