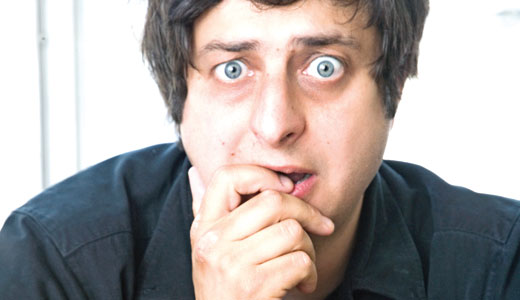 Eugene Mirman is a prolific guy. You might recognize him as the character Eugene from “Flight of the Conchords,” or for his voice work as Cecil Tunt on “Archer,” or for his most recent role as Gene on “Bob’s Burgers.” But it’s the comedian’s stand-up act that brings him to Headliners on Tuesday.

Comedy has been a key part of Mirman’s world from a young age. “I grew up in the ‘80s, and there was a fair amount of stand-up, and I really adored it and looked up to it,” he says. “When I was in elementary school, I listened to a lot of Bill Cosby, and by high school, I discovered Emo Philips and Steven Wright.”

The Russian-born comic, who emigrated to the U.S. with his family at age 4, is literally a student of stand-up. Mirman first started experimenting with comedy at 18, when he graduated high school, and he quickly turned the hobby into a full-blown academic pursuit. “I went to college for comedy,” he explains. “I went to Hampshire College, where they let you design your own classes, and my degree was in comedy.”

Mirman lists his years at Hampshire, as well as his childhood in Massachusetts as an immigrant, as two of the greatest influences on his work as a comic. He’s a firm believer that the places where you grow up and where you live have a sociological influence on comedy or writing. “It’s indicative of your experiences,” he explains. “The way I view things is from my parents and immigrating from Russia, and eventually discovering comedy, and then finding a school that let you construct your own major — which is very much like immigrating in that you get to make your own course. I think there’s a huge amount of stuff that influences me, but I don’t think there’s a specific type of tone.”

Mirman seems consumed by comedy — it imbues everything from his writing to his everyday conversations, which are filled with jokes and observations. “The main focus for me was always comedy, although I did write a book one time and I really enjoyed that. My main focus has always been comedy in different formats. I really never considered anything else. Not to say I wouldn’t do other things, but for my entire life, I’ve been focused on comedy in one form or another.”

A gifted storyteller, Mirman seems to work as well with polished material as he does improvising on the fly. Many assume television, especially animated series, is entirely scripted, but Mirman notes, “On ‘Bob’s,’ we get to improvise. When we do voice stuff, we do a bunch of takes, and they pick the one they find most fitting.”

Sometimes for comedians, the line between improv and written comedy can seem tenuous. But with his method, Mirman says he’s always tried to cultivate both. His writing process strikes a balance between the freeform and the structured. “I’ll sit down and try to write things I was thinking about. Other times, it will be a little more complicated bit, and I’ll have to work it out over time. My process is real varied because it functions in a variety of ways. Also, I think switching up helps me write.”