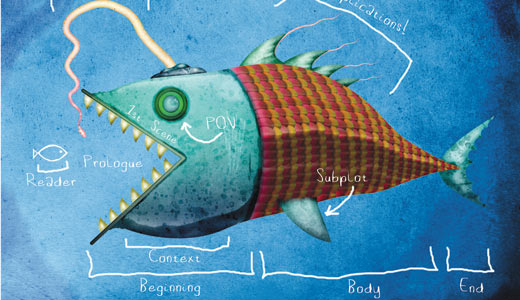 Fiction writers — and those who would join their ranks — often have a shelf filled with several different types of “how-to” volumes. There is a regular flow of new books loaded with writing exercises, as if they were puzzles to keep creativity fresh. Many others come out as memoirs of an author’s personal experience distilling their artistic consciousness. And there are those trumpeting “newly uncovered secrets” to publication, riches and fame — not unlike books touting how-to-beat-Wall-Street investment schemes.

Stephen King produced a relatively modest-length (for him) classic that recounts some of his steps along the path to success, combined with a single protracted lesson on how he approached the revision of one of his own drafts. Anne Lamott’s “Bird by Bird” similarly sneaks in education with both approach and specific tips while appearing to be a light look at a writer’s life. John Gardner’s “The Art of Fiction” is one example of something more clearly substantial. Now, anyone who takes to the keyboard but isn’t on the bestseller list should at least consider picking up “Wonderbook,” which writer-editor Jeff Vandermeer has carefully assembled with an orchestrated army of contributors.

Not only is this book encyclopedic, it’s a multimedia treasure trove. Illustrations such as the one pictured are detailed like treasure maps in a Dan Brown thriller — demanding but rewarding, and with a playfulness tailor-made for bibliophiles. There are sidebar essays and interviews with the likes of George R.R. Martin and Ursula K. LeGuin. Seemingly minor choices in storytelling style get brilliant, in-depth treatments by the author or his guests. There’s also lots of fun along the way, such as the taxonomy of “first readers to avoid.”

Given everything this book offers, and its low price, what’s not to love? A portion of the potential readership might simply see an intimidating density. Page margins are stuffed with enough quirkily voiced opinions to suggest the need for some ADHD meds. And most of the enterprise is simply too specialized, favoring Vandermeer’s genres of choice: science fiction, fantasy and surrealism.

Examples from the literary mainstream are brought in regularly, and to excellent effect. But this is a volume where traditionally marginalized forms of story take center stage — and a reader who doesn’t already tolerate them might give up on this superlative volume. Truly a shame, as Vandermeer has sweat blood to explain clearly, in terms accessible to anyone with both curiosity and will enough to get stories on pages.