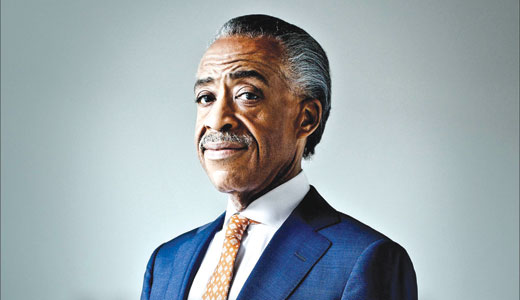 The Rev. Al Sharpton has to be one of the most divisive figures of the quarter-century, but his history is more than tracksuits and Tawana Brawley. Those subjects make up but two chapters in a lifetime of public service and visibility. In “The Rejected Stone,” the MSNBC host embraces his achievements and his stumbles in a sum-of-its-parts autobiography that may not change the minds of those already turned off and against him, but does go a long way toward providing detractors with perspective on the evolution of a man essentially learning and growing on the job, and under a spotlight few of us will ever know.

Sharpton has become such a part of our culture that he is more persona than man, but “The Rejected Stone” humanizes him in tight language and a focus not often found in the verbal arsenal of those who call themselves “Reverend.” Sharpton details his childhood spent behind a pulpit, seen as both a pet to his elders and a circus act to outsiders, but neither of those in his own view. An invitation to join James Brown’s inner circle provided him a father figure (and yes, follicular inspiration) that would extend past the Godfather’s passing in 2006. Brown taught him lessons on manhood, business, public relations and celebrity that prepared him for his future in civil rights.

“The Rejected Stone” reads like those books by nascent political characters lobbying their tomes just before seeking a higher political office, but Sharpton says emphatically that his life as a candidate is over. You smirk a bit at his assertion that his previous candidacies (mayoral, senatorial and presidential) were merely vehicles to change the conversation and less about the gigs (perhaps truer of his 2004 presidential run than any other attempt). Regardless, he has done more throughout the last 20 years to introduce neglected subjects in the national discourse, becoming more selective in when to go to the mattresses and when to just release a statement and let go.

The book is broken up into non-linear subjects, mostly life-affirming topics of going for it, focusing on goals and dreams, and what to do with public attention. It’s a self-help of sorts, if in one’s anecdotes one gets to tell tales of officiating at Michael Jackson and James Brown’s funerals, sparring with Jesse Jackson during President Obama’s initial run and fielding Puff Daddy’s mother’s requests for inauguration tickets. It’s an improbable, imperfect life, but one that, in the balance, is a remarkable one; he has left his surroundings in a better state by voice and presence alone. The title comes from a biblical passage in Psalms: the stone rejected by builders that became its cornerstone.

The recurring theme of Sharpton himself as rejected — by his father, by the media, by fellow voices — doesn’t complete the analogy of Sharpton as The Cornerstone. He’s simply a cornerstone, building his own foundation, one whose doors swing open freely and provide shelter to any who have the need.