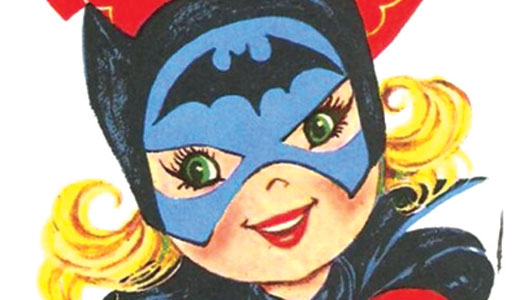 I used to look forward to Valentine’s Day as a child. It was the one time of year I could find out what the boys in my class thought about me. At the instruction of our teacher, we would create a large envelope-like mechanism that would collect our classmates’ valentines. My heart raced every time someone approached mine and inserted their heartfelt Pound Puppy-themed holiday card.

Of course, the biggest thrill of Valentine’s Day was picking out the theme you wanted your own cards to be. I recall cards adorned with the likes of Donald Duck and his buddy Goofy. I remember a few years of getting grumpy Garfields, downtrodden Charlie Browns, smurfy Smurfs, heroic Spidermans, ironic Ziggys and sassy Bat Girls. Scratch N Sniff valentines were all the rage until He-Man, Transformers, Madballs and Garbage Pail Kids made them seem like child’s play.

I actually kept my classmates’ valentines for years, perhaps as proof that, for one day, I was validated. Sure, it was just an assignment each of us was required to complete — like dissecting a frog or memorizing state capitals. It’s not like any of my peers actually wanted me as their valentine — I was just happy they knew my name and spelled it without an H.

While the front was full of hearts, and unicorns, and puppy love, and demanded I be the giver’s one and only, on the back was simply his printed first name etched in pencil — crayon, if you were lucky. Did he really mean it? What do you have to do if you’re somebody’s valentine? Hold hands in gym class? Eww, maybe I don’t want to be anyone’s valentine. I know Mom wouldn’t approve. And my brothers would make fun of me.

I certainly was careless in doling out valentines for people I had no feelings for. I hoped the nerd wouldn’t read into it and want to hang out during recess. I hoped the smelly girl wouldn’t want to be my new best friend. I hoped the cute boy wouldn’t call me names again on the bus.

Whoever it may be, just make sure he knows how to spell your name correctly — and when he scribbles his name on the back of that My Little Pony valentine, he means every word of what’s on the front. And make him buy dinner. That’d be nice.

Drunk Texts of the Week
• She’s been hittin the tit whiskey for a long time
• I’m sorry I humped your head this morning
• Im not drunk, Im just weird
• It’s between ass cancer, coat hanger abortions and me time