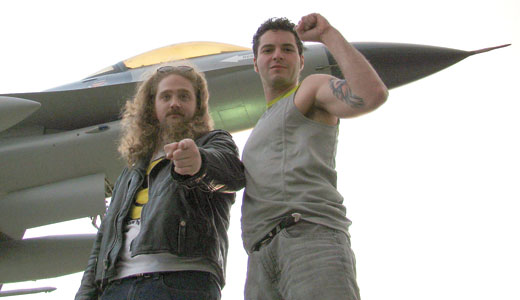 Berea is for lovers

One of the most prolific contributors to the local music scene hasn’t even been local lately, but he’s still pumping out product like he never left. John King’s resume is varied and unique — he has created and produced visual art and music, curated the long-running record series (and label) Louisville is for Lovers, and co-founded the Louisville Zombie Attack.

Now 36, King is a student at Berea College and working in their Sound Archives program. This month, King’s long-running hip-hop project Team Totoro is officially releasing a new album, Laser Beats, filled with 19 tracks of old school (or “tru skool,” in their parlance) fun. But that’s as close as he’s getting to a Valentine’s-related project this year.

“After putting out three records in under two months, I’m taking a break,” he says. His other band, The Gallery Singers, released a new EP in November, one King worked on while also assembling a full-length local tribute to Will Oldham.

“It’s funny,” says King, “Valentine’s Day was the biggest part of my life for over a third of my life, and now the past couple years, I have a bit of empty nest syndrome — and some guilt — every time February rolls around.”

He laughs as he acknowledges that he has become known as “The VD guy” to some for his Valentine’s Day-themed projects. It started in 1999 at Sparks, the nightclub he started working at the week he graduated from high school. “I might have hidden my true age a little bit,” he says. “I really miss Steve Ann Irwin, the owner of Sparks. He was like a father to me. He always had faith in me; whatever ideas I had, he always let me run with it.”

King has been talking to a few people about possible projects, but his current focus is on graduating early. “Louisville is my home. This is the longest I have lived away, and as much as Berea College has given me, I can’t wait to get back and start more projects!”