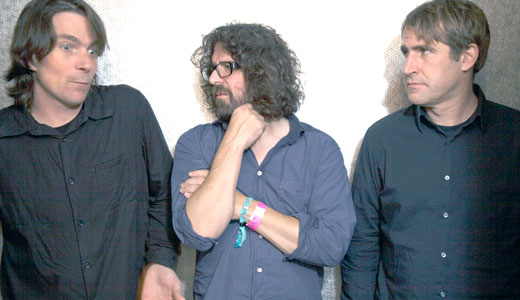 Initially formed by Lou Barlow and Eric Gaffney in 1986, Sebadoh began as a bridge between harsher ’80s post-punk and the kinder, gentler ’90s. The group — which added Jason Loewenstein in 1989 — became an indie rock pioneer, known early on for their “lo-fi” home-recording style. Gaffney left in 1993, and the band’s momentum began to slow in the late ’90s.

After a 13-year break between recordings, Barlow, Loewenstein and drummer Bob D’Amico released a new Sebadoh EP, Secret, in 2012, followed by the full-length Defend Yourself last fall. They play Zanzabar on Thursday, Feb. 20.

Co-leader Loewenstein lived in Louisville for most of the decade between 1995 and 2005. Artist Doug Miller was his friend and colleague at ear X-tacy Records during that time.

“Sebadoh’s new album is their most mature work to date,” Miller says. “I don’t know if that is from the actual length of time that has elapsed, or the truly heartbreaking lyrics that are sad in those gloomy memories of a broken relationship but wise in the knowledge as to why it failed. Isn’t that maturity at its core? There is also a clean and vivid sound … that I think has come from the years of work and the honing of their craft that the band has done in their various side projects.”

He continues, “Songs like ‘Listen,’ as the title implies, offer the listener a space that is layered and gorgeous. The resonance of ‘Let It Out’ also is such a melodic and careful song that I can’t imagine ’90s Sebadoh making it … this record is a blaring, crooked and wild rock ’n’ roll venture with country-patina songs like ‘Inquiries’ that stand out and require repeated listens.”

“The Kentucky connection — Loewenstein — I think is more apparent in the EP; some of the grinding, country-laced songs are all, in some way, soaking in bourbon (or something stronger: see ‘My Drugs’). Songs like ‘I Don’t Mind,’ from the EP, have been danced to many times at my house.”