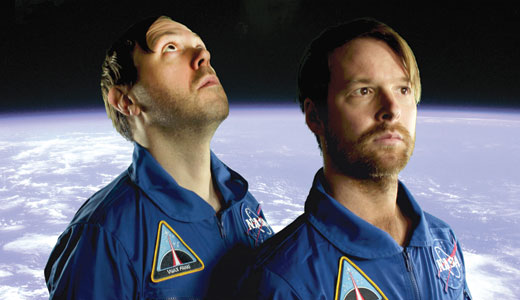 It should come as no surprise that The Astronaut, the long-gestating newest album from Louisville’s wonderfully weird Wax Fang, is anything but completely ambitious. Last fall, the trio scored an episode of the animated sitcom “American Dad,” which saw its protagonist whisked away to outer space; it’s also the subject of the band’s album. That album opens with an almost 17-minute opus that comprises approximately a third of the album. This rock opera contains a sheer magnitude of material, a sonic spectacle equally at home lulling you to sleep or unleashing prog-rock levels of guitar-shredding glory.

This predilection for soaring heights isn’t unique to the genre, and especially not to Louisville, a town with precedents for long-form indie rock. Singer/guitarist Scott Carney says, “Ever since hearing Rodan’s ‘The Everyday World of Bodies,’ I have been interested in working in the long form. When we set out to make this record, we felt we finally had an idea that merited a long-form treatment. After all, space is infinite, right? We didn’t necessarily set out to make this a space-rock opera. The term didn’t come around until it was finished, while trying to succinctly describe it to people. It just seems fitting.”

The Astronaut was a long-gestating project, and, like the music contained in the album, evolved over time. “‘The Astronaut, Part 1’ began as something (bassist) Jacob (Heustis) and I created on a cassette tape recorder about 15 years ago,” Carney explains. “It was originally called ‘The Acrobat (Captured in Flight).’ I rediscovered it years later and brought it to the attention of the band, where we started jamming on it and, before long, had three very distinct ideas that would form the structure of that song. It just so happened to be extremely long.”

Surprisingly, Carney doesn’t have as vivid an interest in science fact as science fiction. It’s not for lack of curiosity, though, as he explains. “I like science fiction as much as the next closet nerd — I was raised on the nerd holy trinity of sci-fi, fantasy and horror, and it often seeps into my work — but astronomy, specifically, not so much. As someone with a very curious mind, I’m always interested in new discoveries — the newly released NASA photograph of the ‘Hand of God’ phenomenon was simply stunning — but I haven’t kept up with them much since I finished writing the lyrics for this record. Does it inspire me? Certainly. But not in the ways you might think.”

Carney’s latest work relates to a popular sci-fi movie. “I had recently re-watched ‘2001: A Space Odyssey’ around that time and was haunted by an image from that film: a shot of an astronaut hurtling, untethered, into the abyss of space. I thought to myself, ‘Well, wouldn’t that just be absolutely horrible?’ The coinciding of this image in my mind and the creation of this sparse, expansive space-rock song warranted the title to be changed to ‘The Astronaut.’

“The ‘Part 1’ was added almost as an afterthought,” Carney continues. “We thought it would be funny to suggest that this song, with a runtime of 17-odd minutes, was but the first part of something much larger. At the time, we had no intentions of expanding on it. Flash-forward to 2014 and voila: a 42-minute concept record in three movements with two transition pieces, for your listening pleasure.”

For bassist Heustis, it’s simple. “Who isn’t curious about the unknown, the final frontier?’” he says. “Humans have always had a tendency toward exploring uncharted territories. We’ve talked about how music is somewhat of an intangible thing — it’s these vibrations, molecules floating and bouncing around in the air; the song starts and stops and then, poof … it’s gone. If you really stop and listen and let go, it can be a transcendent experience, whether it’s live or in a pair of headphones, or cranked on the hi-fi at home. So it seemed like an appropriate setting to tell a story of transcendence, involving the maybe not-so-fantastical fantasy of space travel.”

The Astronaut is self-released by their label Don’t Panic Records and is available now via their website or iTunes, or at any local record shops.