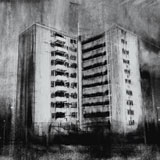 English ambient artist Leyland Kirby is generally known for the tender, melancholy work he’s released under his own name and under the moniker The Caretaker, but Watching Dead Empires in Decay, his debut album as The Stranger, finds him working in much darker, more unsettling territory. It’s an apt title for the album, which sounds something like found recordings of a bizarre, wordless musical incantation carried out by the members of a post-apocalyptic, questionably humanoid species: Ominous, dissonant drones groan beneath the rhythmic pounding of tribal percussion and the sounds of hammers on various metal objects, betraying only the occasional obvious synthesizer flourish. But Empires is certainly not without its beauty, as evidenced on the gorgeous mid-album “Providence or Fate,” all minor-chord string swells over a gentle, repetitious, wooden-sounding beat. Empires is obscure but captivating.