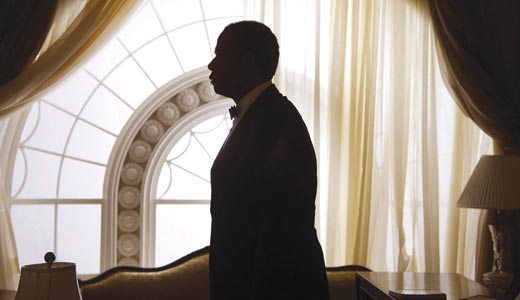 Inspired by the life of Eugene Allen, Forest Whitaker is terrific as “Cecil Gaines,” the titular White House servant who discretely served eight presidents over 30 years. Frankly, the other casting choices — Robin Williams as Dwight Eisenhower, John Cusack as Richard Nixon, Alan Rickman as Ronald Reagan, etc. — left us cold, but the movie rises above on Whitaker’s talent and the history seen through his character’s eyes, including the civil rights movement, Vietnam and the Cuban Missile Crisis. Much like “The Help,” this scales history down to the human element, making it far more powerful. A must-own.

We’ll not deny it: We are drooling uber-fans of Vin Diesel’s primordial action antihero, Riddick, first seen in “Pitch Black” (2000), and then in the blissfully over-the-top blockbuster, “The Chronicles of Riddick” (2004). That latter film lost money, so this time out the filmmakers made a much smaller, more accessible flick, with Diesel battling alien predators and waves of semi-human mercenaries on a lifeless, sun-blasted hunk of rock in the middle of an infinite nowhere. Katee Sackhoff from “Battlestar Galactica” provides the requisite shower-scene boob-flash, while Karl Urban — one of our favorite actors — does the running and fighting. Freakin’ awesome. Don’t miss it.

Bruce Springsteen, Stevie Wonder, Mick Jagger, Sting and a half-dozen other of the world’s great acts step aside to let their backup singers take center stage in this excellent doc. Of particular note is the phenomenal Darlene Love, who sang lead on such Phil Spector hits as “He’s a Rebel” and added her talents to scores of his “Wall of Sound”-era groups before becoming a staple with such legends as Sam Cooke, Dionne Warwick, The Beach Boys and Elvis Presley. Our only complaint: It’s too short at 90 minutes. We could have watched for days, Day Doo Run Run, Day Doo Run Runnnn.

A dark drama in which deer hunter Sam Rockwell accidentally kills a woman, then finds she’s holding a box full of money. In a series of bad choices, he gives the money to sleazy lawyer (or is that redundant?), William H. Macy, to keep it out of the hands of his divorce-minded wife, Kelly Reilly. Annnnd, here come the criminals, looking for their loot. It feels like an old Sam Spade film noir, with the deep piney woods standing in for a rain-soaked city. Worth a look.

Jean-Marc Barr (“Dogville”) stars as Beat master Jack Kerouac, aka “Jack Duluoz,” during his legendary cloister at Big Sur after the instant worldwide fame of “On the Road” drives him to drink, depression and lots of sex. What a great gig! He goes slowly mad while costars Stana Katic (TV’s “Castle”), Radha Mitchell, breathtaking Kate Bosworth, Josh Lucas, Henry Thomas and Nora Kirkpatrick hog the spotlight. A nice companion to the recent Kristen Stewart version of “On the Road.”

OK, there’s already been a half-dozen remakes and sequels to this Stephen King tale, so what gives? In a word, Chloe Grace Moretz. She brings a profoundly different flavor to the Sissy Spacek role, with little help from Julianne Moore as her Christian-nutbag mother who tries to keep the family telekinesis under wraps. Yes, it all ends with a bloodbath at the prom, but Chloe is the first actress yet to make you feel both her pain and the overwhelming dark pleasures of being all-powerful. Highly recommended, especially if you view the Spacek version and this one back-to-back.

Simply put: The most powerful indie drama you never heard of. Wendell Pierce, a family man who routinely travels on “business,” must leave again over the Fourth of July weekend, leaving lovely daughter Aja Naomi King (“Emily Owens M.D.”) to fend for herself and her ill mother. But the young woman spends most of her time with her Latino boyfriend, E.J. Bonilla. Dad, meanwhile, is not really at work; he’s visiting his white, gay young man, “June” (Emory Cohen), unaware this weekend will mark a very real independence day for them all. Brave, provocative and daring.

This award-winning indie darling is a unique and mesmerizing look at …. well, we’re not sure. It follows a young man who wakes up one morning and decides it’s time to get his shit together. He’s going to be better to his girlfriend, his mom and his little daughter. But this is a dramatization of a true story, that of Oscar Grant III, who was held face down by two cops as a third stepped back and shot him in the back while he waited for a BART train. This is not a spoiler — the whole thing was captured on scores of cell phones at the time — and the filmmakers want you to be fully aware that today is Oscar’s last day on Earth. A powerhouse.

A frantically paced 90-minute 3-D crash course in Parkour starring William Moseley (“The Chronicles of Narnia”) and every surface, hole and crag in NYC. He uses his special skills to commit robberies with the help of his dad, Adrian Pasdar, until he meets Kelsey Chow (“One Tree Hill”) and the always oily Eric Roberts. A breathless actioner with a neat soundtrack.

Miles Teller (“21 & Over”) is a high-school party animal who falls head over heels for “the good girl,” Shailene Woodley (“The Secret Life of the American Teenager”), in this excellent look at the hormone-and-dreams-driven passions of youth. Haunting, heartbreaking, exciting, lovely, intoxicating and arousing with Brie Larson, Kyle Chandler, Jennifer Jason Leigh, Mary Elizabeth Winstead and more. Highly recommended, though the “R” rating is bogus.

This divorce/family comedy for adults has an amazing cast, with Adam Scott playing the titular Adult Child of Divorce between parents Richard Jenkins and Catherine O’Hara (now married to Amy Poehler and Ken Howard, respectively). All is well until his brother gets engaged, opening up a lot of old wounds — including the long forgotten scientific divorce study he participated in as a child. With Mary Elizabeth Winstead as his girlfriend and Jane Lynch in full-on wacky therapist mode.

Bruce Willis has a problem. Every time his date, luscious Kim Basinger, takes the least wee little sip of alcohol, she becomes a screaming, uncontrollable wild woman for which no act is too extreme or perverse. We should all have such problems. Blake Edwards directs every man’s fantasy shot to hell, now on Blu-ray.

Long delayed due to copyright battles over the awesome ’50s-’70s soundtrack, Dana Delany, Nan Woods, Chloe Webb, Marg Helgenberger and Michael Boatman offer a distaff look at the Vietnam War from inside the “Five and Dime”: the 510th Evacuation Hospital and R&R Center. This season, Megan Gallagher joins the cast, having shrapnel plucked from her firm butt before serving as resident journalist for the next few seasons. One of the finest shows ever to grace the tube; 17 episodes on five discs with lots of bonus goodies. A must-own.

DEAD OF THE NITE

Tony “Night of the Living Dead” Todd does a cameo in his no-budget “Internet horror hounds lost in an old dark mansion leave footage that others find,” which should tell you about all you need to know. With Limey Joseph Millson from “Casino Royale” as a cop and leggy blonde Cicely Tennant as a leggy blonde who has Todd way up in her face. Nicely done no-budget horrors with a plot twist.

Trashed by some as “Worst. Movie. Ever.,” this zero-budget crime actioner was simply too ambitious for rising filmmaker/star Pascal Cooper, but you gotta give him credit for trying. He plays a former criminal/undercover-man who fakes his own death to escape that life. Problem is, his little sister is now seeking revenge on the men who “killed” him — and his former employers are disposing of anyone he’s ever met in an attempt to hide what they were doing. Like we said, ambitious and fun to watch in a so-bad-it’s-almost good kind of way.

LAST OF THE SUMMER WINE: VINTAGE 2001

The longest-running comedy series in England, a bunch of fluff and nonsense about three geezers from Yorkshire who have simply never grown up, continues its sojourn to DVD. The year 2001 (after 28 friggin’ years on the air!) finds the boys helping their friend Wesley (Gordon Wharmby), who has just invented a portable hot drink machine, freely showering comic mayhem upon several social events. A gentle yet wonderfully funny look at life led by Peter Sallis, the voice of Wallace from “Wallace and Grommit” fame. Recommended.

NINJA II: SHADOW OF A TEAR

When a martial artist’s (Scott Adkins) pregnant wife is murdered, he tracks the killer from Japan to China to Burma, vowing revenge against the meth-dealing drug lord/assassin Goro (Shun Sugata). Quite possibly the most intense movie we’ve ever seen — and we’ve seen thousands of these things — with Adkins at one point faking his own death, plus a very surprising plot twist that will leave you dizzy. Recommended.

Lebanon is a very old country with deep traditions and a decades-old civil war still simmering. This flick is almost an “On the Road” for the current generation of young Lebanese, with Rudy Moarbes as a starry-eyed man who falls in with a group of five others to live “free.” But their outspoken freedoms come at a high price in a land where bigotry, discrimination and violence still permeate much of the culture. A powerful drama; in Arabic with subtitles.

If you’ve got a box full of old VHS tapes in your basement … have we got a vid for you! This lively doc looks at the lost world of videotape, starting with the VHS vs. Beta debacle, moving to a look at how VHS literally changed the world, and ending with the rapidly growing generation of VHS noobs/diehards who own thousands of tapes, resurrecting a once-dead industry. Along the way such greats as Lloyd “Troma” Kaufman, Atom Egoyan, Frank “Basket Case” Henenlotter and Charles “Full Moon” Band share their recollections and passions. Fun.

“Love Struck”’s Ryan Caltagirone stars in this brutal tale of bloodthirsty otherworldly fiends and his guilt over a missing brother. That sibling search brings him to an Haitian insane asylum where everyone — including the always reliable Danny Trejo — seems to be acting very strangely. This is a real low-rent howler with more ideas than talent, but it dignifies itself by going way over the top with its voodoo-driven demon horrors from beyond the grave.