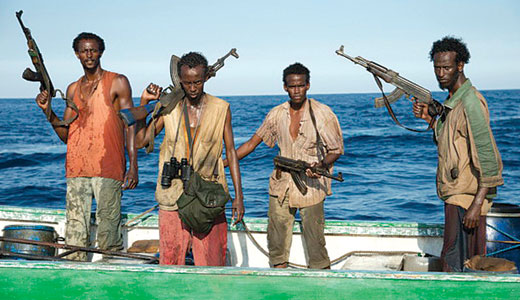 Atherton grad Jess Weixler (“The Good Wife”) is Justin Long’s bride-to-be in Phoenix — when the best man, Lumpy (Tyler “Tucker & Dale vs. Evil” Labine), drops dead. They cancel their honeymoon and begin funeral planning in this knowing comic drama that’s filled with neat surprises — like discovering how little they really knew about their best friend. Or each other. Among the great cast, watch for young Addison “Odd Thomas” Timlin who nearly steals the movie, Shelley Long and Frances O’Connor. A great date flick — and you can win one free from LEO and Magnolia Home Entertainment: Just click Free Stuff at videotapeworm.com/video.php. You’re welcome.

Tom Hanks is superb, as always, as the seaman at the center of this true tale of murder and piracy off the coast of Somalia. But the real star has to be Barkhad Abdi as the lead pirate, Muse, forced into this desperate act by war lords who will mutilate, rape and kill his entire family if he doesn’t obey. (Previously seen in 2010’s “Conan,” Abdi was born in Somalia but raised in Yemen before coming to America at the age of 14.). Director Paul “Bourne” Greengrass kept Abdi and Hanks apart until filming was nearly over to increase the sense of uncertainty and alienation between the two, resulting in one of the most chilling and effecting movies we’ve ever seen. Recommended.

Nastassja Kinski is just plain hot in this famous reworking of a Val Lewton favorite, now on Blu-ray. She’s a troubled young woman, terrified she’ll turn into a savage black leopard when aroused — making her only safe sex partner in the world her similarly afflicted brother, Malcolm McDowell! So she keeps would-be boyfriend John Heard at arm’s length, lest he get eaten, pushing him right into the arms of willing Annette O’Toole. A kinky time capsule from director Paul “American Gigolo” Schrader.

Scott Aukerman (“Between Two Ferns”) and Reggie Watts (“Conan”) created and star in this most unusual “talk show” that isn’t. Yeah, it looks and feels like a talk show, and there are guests and they do talk, but this show resides in the beating heart of the alt-comedy scene, with such talents as Zack Galifianakis, Amy Poehler, Patton Oswalt and Seth Rogen providing the ever-collapsing structure and moronic segues that simply die for comic effect. Hard to describe but brilliantly executed. Not for every taste, but some of the sharpest comedy available today.

This little known French drama in six 90-minute episodes deserves a bigger audience. Thirty-something knockout police officer Ingrid Chauvin (who does a topless scene) returns to her childhood home, a ruggedly beautiful island, to marry her childhood sweetheart. But then a series of bizarre, mysterious deaths take members of her own family, along with others on the island. And at the time of each death, the local menhirs (standing stone monoliths) begin to bleed! And the blood matches that of the victim! It all harkens back to a dark day when the locals’ ancestors deliberately wrecked ships to consume their cargo and, it is rumored, sacrificed their crews to pagan gods. Nice.

Hollywood stars must do a number of low-budget films to pay their studios back for making them stars in the first place. This one belongs to Dylan “Hostages” McDermott, playing an NYC mechanic who wakes up after his birthday party inside of a walk-in freezer (been there). He can’t get out and it all has something to do with Russian mobsters and deranged cop Peter Facinelli from “The Twilight Saga.” Meanwhile, McDermott is slowly freezing to death all alone (making it easier to splice his scenes into their scenes). A good little drama with a few fun surprises.

Hunky hubby Rossi Morreale has yoga-inspired woman troubles in this squeaky-clean comedy/romance that features some of the most strikingly beautiful women working today. Watch for Ali “Look” Cobrin, Andrea “General Hospital” Bogart and “The Price is Right” model Jesse Golden, to name a few.

As if everyone in the world didn’t already know, action star and real-life former gangbanger Danny Trejo returns for another over-the-top turn as former Federale, Machete. This time the president of the United States (Charlie Sheen!) sends him after a crazed revolutionary and a billionaire buddy who intend to start profitable wars from space. Writer/director Robert Rodriguez creates a much shallower film this time, filled to overflowing with great cameos, hot women, guns, explosions, sex, bigger guns, more women and MORE GUNS! A live-action Chuck Jones cartoon filled with blood. Don’t miss it.

That “bastard son of a hundred maniacs,” Freddy Krueger, owned ’80s cinema as the once-human monster who carves children apart from within their dreams — resurrected/rebooted yet again in 2010. But, surprisingly, this is the first “official” documentary ever to explore the Elm Street films. Creator Wes Cravens opens his vaults and provides access to more than 100 actors, artists, special-effects gurus, musicians and conceptualists, with Heather Langenkamp serving as our guide with help from Robert England, Jackie Earl Haley and everyone in between. Lots of fun.

Simply put: America’s best-ever cop show. This 1997-98 season found NYC’s finest, Dennis Franz and Jimmy Smits, dealing with fallout from the murder of mobster Joey Salvo (Peter Onorati), while Kim Delaney goes looking for body snatchers, all under the knowing eye of show creator Steven Bochco. But what everyone remembers most about Season 5 was that the long-simmering romance between Smits and Delaney finally boiled over, providing audiences with some of the hottest adult action ever seen on broadcast TV. A must-own.

One final season of savagely intense political/personal/sexual machinations from Denmark. Sidse Babett Knudsen continues her blistering ride as the country’s first female (now former) Prime Minister. The new game is to get her back into power, so she joins forces with her former nemesis, blonde sex-goddess Birgitte Hjort Sørensen — but the issue of sex-for-hire becomes a hot button, crushing their fragile union mid-season. Meanwhile, single mother Knudsen’s secret lover is exposed when he falls ill, weakening her resolve and making her vulnerable to further attacks. Simply terrific.

Lackadaisical man-child Shia LaBeouf receives a visit from his dead mother (Melissa Leo), telling him to go to Bucharest for no particular reason other than lower production costs. He does and immediately falls in love with frigid Evan Rachel Wood, the daughter of a man who dies on the flight over. With us so far? OK, her boyfriend, Mads Mikkelsen, is a ruthless criminal, sending Shia on a run for his life. The good news? Even if you don’t buy any of this hogwash, the movie is actually very entertaining, with “Harry Potter” alum Rupert Grint and Vincent D’Onofrio. Narrated by John Hurt (always a sign of quality).

Three hot women — Carly Pope (“The Tomorrow People”), Samaire Armstrong (“The Mentalist”) and Diora Baird (“The Wedding Crashers”) — stumble into a bloody gang shootout and walk away with a cool $3 million. Their plan to flee the country goes south when one of them tells her boyfriend about the cash. An oddly comic crime-actioner with the always welcome John “Gimli” Rhys-Davies as a baddie who steals all the best lines. Worth a look.

Aka “Monster of Terror,” this is one of Boris Karloff’s least appreciated films. Inspired by HP Lovecraft’s “Colour Out of Space,” he plays a wheelchair-bound botanist experimenting with weird meteorite radiation on the greenhouse plants at his crumbling English estate. They grow gigantic and begin to move just as Nick Adams arrives to visit his fiancee, lovely Suzan Farmer. Frankly, with a better budget for special effects, this could have been a knockout, but we always liked it because of its oppressive, almost haunted atmosphere. Now available on Blu-ray.

Julia Louis Dreyfus plays a single mom working as a masseuse, with a college-bound daughter, going through the throes of impending empty-nest-hood. She strikes up a promising friendship with James Gandolfini, but can’t commit to a relationship. Why? Because her new client, damn-sexy Catherine Keener, keeps sapping her confidence by ragging on the men in her own life. Yeah, it’s a chick-flick, but fun, funny and good-looking.

Major hottie Lake Bell leads an amazing cast — Rob Corddry, Alexandra “Rizzoli & Isles” Holden, Eva Longoria, Geena Davis, “The Daily Show”’s Demetri Martin and more — in this rarest of romcoms: One that’s actually funny! She plays a somewhat wimpy voice coach who decides on a career in the lucrative, if deadly, arena of movie-trailer voiceovers. Problem is, this puts her in direct competition with the undisputed master of the game, her father (Fred “A Serious Man” Melamed)! We really liked this; check it out.

Another terrific crime-thriller from Sweden, aka “Den fördömde” (“The Cursed One”), this follows rugged Rolf Lassgård as the titular police profiler whose personal life is a shambles. For starters, he’s a sex addict who blames himself for the death of his wife and daughter during the 2004 Thailand tsunami. And then he discovers that his new partner, Vanya (Moa Silén), is the illegitimate daughter he never knew he had! Frankly, the guy is a basket case, but it drives him to hunt down the monsters who prey on the innocent. An excellent, if underrated series in Finnish with subtitles.

Brenda “Pride & Prejudice” Blethyn is a somewhat distracted force of nature as the titular English inspector of this classy BBC detective series. Her disordered life keeps getting in the way of solving all those pesky — and often extremely gory — murders and whatnot, and her abrasive manner doesn’t endear her to anyone (been there). But she gets results, and that’s what matters. Four 90-minute mysteries with guest stars the like of Liam Cunningham from “Game of Thrones” and Dean Andrews from the original British version of “Life on Mars.” May not be available until Jan. 28 in some areas.