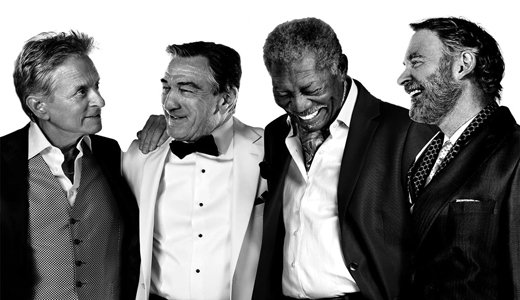 When lifetime-single geezer Michael Douglas decides to get married (to a 30-something, no less), he invites oldster buds Robert De Niro, Morgan Freeman and Kevin Kline to one last blowout in Las Vegas. Despite the obvious AARP “Hangover” jokes, this is a surprisingly warm and wonderful flick with a dollop of sleaze and enough star power for 10 movies, including Mary Steenburgen and Joanna Gleason. Won’t change your life or anything, but an entertaining couple of hours.

Chris “Thor” Hemsworth, who seems to be in everything these days, plays real-life Grand Prix legend James Hunt, whose breakneck style both on and off the course are the stuff of legend. Daniel Brühl (“Inglourious Basterds”) plays his famous rival, Niki Lauda. The two men could not be less alike as they compete for glory, money and, in Hunt’s case, ravishing rich women such as Olivia Wilde and “Game of Thrones’” oft-nude babe Natalie Dormer. One of director Ron Howard’s best if least appreciated films: in turns heroic, foolish, breathtaking and awash in the pain of human folly.

Just in time to capitalize on “Rush,” we offer this exciting doc on the sport of Formula One Grand Prix racing, especially that period in the late ’60s when the cars become little more than jet engines with wheels. Deep-pocketed sponsors, realizing the potential for spectacular death and bloody carnage, dolled out millions to attract charismatic, reckless daredevils who lived life on the edge. Those who survived spent the rest of their lives doing what all real men dream of doing: writing video reviews. We are so bored with winter.

Yes, horror maestro Dario “Suspiria” Argento is still among us and still delivering his trademark supernatural shocks smothered in sex. Thomas “Wanted” Kretschmann is Count Dracula, driven to lonely madness in the 400 years since the death of his beloved wife. But what is this?! It appears to be her soul reincarnated in the body of young bride Mina Harker (Marta Gastini of “Borgia”). This sets into motion a scheme to rid himself of her husband with help from her friend Lucy (Asia Argento) and only that damn Van Helsing (Rutger Hauer) stands in his way! Aka “Dracula 3-D,” with Lotsa Nekkid-Pipple.

Ken Marino from “Childrens Hospital” stars in this goofy horro-comedy as a guy under constant stress, which manifests itself as a tiny demon living in his intestines. It finally grows strong enough to periodically exit his butt and take revenge on those who created him. More “Little Shop of Horrors” than “Toxic Avenger,” this is a minor, poop-covered gem. With lovely Gillian Jacobs from “Community,” Peter Stormare as a whacked-out therapist, Mary Kay Place, Claudia Choi and Patrick Warburton.

A well-chosen pair of cult horrors from the mid ’50s. “Mountain” stars cowboy fave Guy Madison as an ex-pat, er, cowboy in Mexico, stunned to discover that his cattle are being eaten by a … dinosaur! The nice no-budget effects are by Edward Nassour, who produced “Sheena: Queen of the Jungle.” The other film finds professor Robert Shayne (from the original TV “Superman”) obsessed with the idea that Neanderthals were as intelligent as Homo Sapiens (which might actually be true). He creates a regressing serum that turns him grunt-ugly and his cat into a sabre-toothed tiger! Co-stars Rocky Jones, Space Ranger, Richard Crane and scream queen Beverly Garland.

This Nickelodeon fave from 2004 was one of that channel’s first original animated cult hits aimed at teens. For four seasons, David Kaufman (Jimmy Olsen from the animated “Superman,” 1996-2000) voiced Danny Fenton, an ordinary kid at Casper High who receives ghostly superpowers to protect the world from spiritual baddies — and his world-famous ghost-hunting parents were none the wiser! Ten discs, all 53 episodes, including the “Phantom Planet” two-parter. A steal at less than 50 cents an episode.

Johnny Knoxville misses some great potential comic moments here by going for cheap gross-out gags instead of true humor. That being said, there’s still some damn funny moments in this tale of an 8-year-old boy who helps his 86-year-old grandpa (Knoxville) travel cross-country, deliberately causing as much social carnage as possible along the way. Oh, and the innocent bystanders are supposed to be real, unsuspecting citizens, unaware that what they are seeing is staged for hidden cameras.

This “tornado full of rocks” SyFy stinker has nothing whatsoever to do with their recent hit, “Sharknado,” other than also being screwy CGI couch fodder. Paul “One Tree Hill” Johansson plays the former storm chaser who sees an impossible series of rock-flinging tornados building up in Boston harbor, and only his crackpot weather theories can snuff them out. “The X-Files’” “Smoking Man” does a cameo, as does freckle-faced 16-year-old Jessica McLeod from the Canadian “Eve of Destruction” miniseries. What can we say? We love crap like this!

This legendary BBC series originally ran only 10 episodes back in the early days of cable, making it largely unseen in America — a situation we feel compelled to correct! There’s murder and mystery afoot during England’s Art Deco period, the perfect place to find Ms. Christie’s sly and wonderful characters plying their trade. Our favorite here is classic Christie: “The Red Signal,” in which a young man receives a premonition of evil as he prepares to attend a dinner party hosted by his best friend — whose wife he is in love with! And she may be a homicidal maniac! Can you guess what happens next? Trust us, you can’t. Highly recommended.

ANGELINA BALLERINA: ON WITH THE SHOW

More merry musical mouse misadventures as seen on PBS’ Kids Sprout channel, straight from Chipping Cheddar (which seems be an awful lot like London of the 1920s). Five episodes wherein Angelina and her dancing rodent lovelies learn important life lessons when surprises arise — like what to do when you lose your voice or want to celebrate dad’s big day. Includes some neat bonus goodies.

Robin Weigert (Calamity Jane from “Deadwood”) is a happily married lesbian wife and mom, living the quiet life in the ’burbs. Then she takes the young’un to the playground, gets bonked in the head and wakes up a new woman … a hot-and-nasty, do anything for a buck, high-class hooker kind of woman. With Maggie “Sons of Anarchy” Siff as her confused spouse, and hot blonde Janel Moloney (“The West Wing”), who gets nekkid, as does cute little Emily Kinney from “The Walking Dead.” A powerful feminist message that’s fun to look at.

Winsome Min-Young Park, who can be seen all over Korean TV these days, adopts a Persian cat when its owner is murdered — and immediately begins having horrific visions/nightmares of a little girl she’s never seen before. Then her best friend adopts a cat. And summarily dies. What the heck’s going on here? A nice bit of low budget horror as only the South Korean’s can do it.