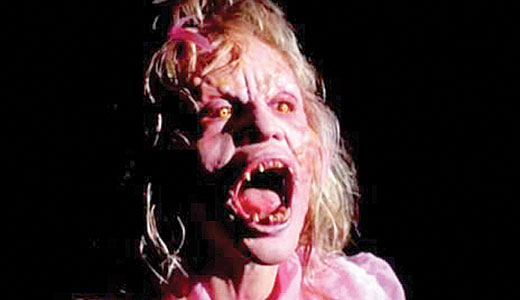 Night of the Demons

NIGHT OF THE DEMONS

A nice new Blu-ray pressing of a perennial horror favorite. A group of 10 largely unknown “teens” decide to hold a Halloween party in an abandoned mortuary. Big mistake. Then they hold a séance in front of a haunted mirror. Bigger mistake! From there on it’s a nonstop demon free-for-all packed with great oozy special effects, crappy ’80s music and widespread sex and chaos. Still doesn’t ring a bell? OK, it’s the one where lovely Linnea Quigley slides a lipstick INTO HER NIPPLE! Oh, yeah! That one! One of the best-remembered and most entertaining demon-possession/slasher flicks of the whole decade.

Wild-child Tawny Kitaen (of Whitesnake’s “Here I Go Again” video) wipes her Ouija once too often and whips up a wanton whirlwind with wicked intent. What is this, the Elmer Fudd review? Watch out for that wascally wabbit! Sheesh. Anyway, if you’re careful, you’ll catch some neat cameos and a peek at Tawny’s amazing assets buried in this pedestrian little horror opus that launched a list of ’80s imitators back in the day. There are worse ways to spend an hour and a half. Now on Blu-ray.

A CASE OF YOU

A writer (Justin Long) meets his dream girl (Evan Rachel “Yowza!” Wood), who is unimpressed by his patter, so he digs into her social media and uses the information to “be” the man she’s always wanted. Problem is, he really hates that guy and is completely bored by all the things she likes to do. A so-so romcom with attractive, likeable leads and some neat cameos (Vince Vaughn, Sam Rockwell, Brendan Fraser, Busy Philipps, Peter “A Christmas Story” Billingsley, etc.). With Sienna Miller, and Peter Dinklage as Long’s diminutive and kinda-gay sounding board.

When Domhnall Gleeson (Bill Weasley from “Harry Potter”) learns he can travel in time and alter his own past, he does what every guy would do: Gets damn-hot Rachel McAdams to be his girlfriend. Then he fine-tunes his life via back-and-forth visits through their shared past, usually ending in comic failure or painful success, but through it all, he comes to understand that the perfect life isn’t the absence of sorrow but the presence of family with which to share it. An adult tale of romance, love, tragedy and pain, with Bill Nighy as the dad who teaches our hero the time-travel ropes.

Matthew McConaughey is terrific, as always, in this real-life tale of an ordinary, law-abiding Texan who learns he has HIV and only 30 days to live in 1985. Unable to get proper treatment due to confusion and red tape, he scours the world for the most promising treatments, drugs and supplements, putting him in the crosshairs of the medical establishment, pharmaceutical giants, politicians and law enforcement. He eventually forms a “buyers club” where others can get the products they need to live at a reasonable cost. One of the best movies we’ve ever seen.

This infamous “Happy Days” spin-off followed Chachi Arcola (Scott Baio) and Joanie Cunningham (Erin Moran) as they leave Richie and The Fonz behind for a new life in Chicago. There they form a rock band and make an occasional buck playing at his family’s pasta house. Awash in Goomba family humor, this is better than we remembered; definitely better than the “Happy Days” horrible final season. Worth a nostalgic look.

An approachable and lavish modern-day updating of Shakespeare’s immortal tale, with help from the writer of “Downton Abbey.” Hailee “True Grit” Steinfeld is a nubile, breathtaking force of nature as Juliet, while Douglas “The Pillars of the Earth” Booth portrays Romeo as a hot-blooded, sensitive and brash young man driven more by impulse than good sense. In short: You really want to see these two get it on. Bonk-chicka wow-wowww! The perfect artsy first-date flick.

This little-known Limey detective series deserves a wider audience. Kevin Whately (“The English Patient”) stars as Jimmy Griffin, an insurance investigator, former cop and full-time lady’s man whose roving eye and cunning mind makes him a master at rooting out criminals and killers and killer babes alike. As a result, his personal life is in the loo and his professional career nearly wiped out. Admittedly a worn premise, this rises above the old-fashioned way: great scripts, seasoned actors and Whately’s undeniable charisma.

THE TICK: THE COMPLETE SERIES

The truly ridiculous live-action series — not to be confused with the truly ridiculous animated one — starring big Patrick “Rules of Engagement” Warburton as the dimwitted and “nigh invulnerable” superhero dipped in blue latex. While this only lasted nine embarrassing episodes, we loved each and every one of them. Our favorite? The one in which his sidekick, Arthur (David Burke of “Chuck,” here dressed as a moth), needs The Tick to get lost so he can romance a girl. “Well, destiny honks the horn of gotta go!” With the great Missy Pile and leggy Liz “CSI” Vassey as Captain Liberty.

THE WHITE QUEEN: SEASON ONE

Based on the book series “The Cousins War,” this BBC series (shown here on Starz) dramatizes the true story of three young women, each determined to sit on the English throne regardless of who they have to kill, screw or betray. Rebecca Ferguson is breathtaking as the pale, nubile (future Queen) Elizabeth Woodville, with Amanda Hale as Margaret Beaufort and Faye Marsay as Anne Neville. Lots of nudity, bloodshed, backstabbing (both literal and contrived), sex, dirty deeds, more sex and courtly intrigue make this a crackin’ good yarn. Heck, you might even learn a little history along the way. Recommended.

This Bulgarian-shot zombie flick has become a fan favorite at horror fests for its old-school effects and video-game pace. Big Paul Logan of such SyFy crapola as “Mega Piranha” stars as the U.S. soldier sent to recover a sample of WWII Russian nerve gas that reportedly turned men into slavering zombie monsters. Along the way he picks up 10-year-old Mya-Lecia Naylor from “Cloud Atlas,” and they spend the rest of the film battling rotters and Russians and Bulgars, oh my! Welcome to the next “Call of Duty”/“Resident Evil” franchise.

CUTIE AND THE BOXER

A touching doc on the sacrifices that artists — and those who love them — must make in order for their art to mature. It follows the life of 19-year-old would-be artist Noriko, who puts her career on hold in 1969 when she falls in love with 41-year-old artist Ushio Shinohara in NYC. Today she is still trying to find her place in the art-world while famous hubby Ushio struggles to push the envelope in the fickle realm of avant-garde artistry. The point? Maybe love is an artform of its own.

Big-eyed 11-year-old Missy Keating is terrific in this no-budget Irish horror. When her family is murdered, no one believes her when she says it wasn’t a gang who did it … it was their house! And things only get worse when she’s placed in a foster home. Been there, seen that? Yeah, kinda, but nobody does spooks the way the Irish do, and the subtext of Western society’s blind eye to child abuse only adds to the cultural richness. Not the best movie we ever saw, but we liked it.

This darkly funny and heartbreaking tale follows Leon, a 10-year-old Canadian hellraiser who gets seriously PO’ed when his mom splits. Taught from birth how to lie convincingly, he uses this talent to lash out through the most evil deeds imaginable, eventually destroying much of his neighborhood! And then, worst of all, falling in love! Antoine L’Ecuyer plays the boy, and he is simply amazing. One of the best damn movies we’ve ever seen. In French with subtitles; don’t miss it.

One of producer Garry Marshall’s best efforts, this “Happy Days” spinoff revived the “I Love Lucy”-style of sitcom humor for eight seasons beginning in 1976. Season 6 saw Penny Marshall and Cindy Williams (plus most of their TV friends and family, including Lenny and Squiggy) move from Milwaukee to Burbank, adding Ed Marino (“Hill St. Blues”) to the cast for one season. But in most viewers’ minds, Season 7 was the “last good” season of the show: With Cindy Williams pregnant and in a legal battle with Paramount, she did not return for the final 8th season, leaving Laverne all alone. A piece of American TV history; a must-own.

We’re not much for sports docs, but this one is different: A look at the life of the late ski legend Shane McConkey, a man who quite literally changed the world by virtue of his humor, humanity and athletic prowess. Born with a restless drive to push the life’s limits, he lived every moment with an unfettered zeal that was infectious, and legions of followers will testify that they walked out of their workaday lives to become successful in business, in their personal relationships and elsewhere, inspired by his boundless enthusiasm. Alternately pee-yourself funny, devastatingly sad, and near-euphoric. Don’t miss this.

The latest visit from the “murder capital of England,” that deceptively peaceful county of Midsomer. This season starts off with a bang as an honest-to-goodness headless horseman is on a spree, lopping the noggins off members of the ancient DeQuetteville family, and it is up to police inspectors Neil Dudgeon (“Son of Rambow”) and Jason Hughes (“Waking the Dead”) to corral the otherworldly killer. Nicely bloody and gruesome at times; funny as hell at others, one of the most addictive shows on the telly.

This poorly named gay drama has a distinctly European flavor to it, despite being set firmly in a blue-collar Texas town. Closet-gay Gabe (Bill Heck, from TV’s short-lived “Pan Am”), a building contractor with an ex-wife, young daughter and many regrets, meets Ernesto (Marcus DeAnda), who has just given his long-time boyfriend the boot. Unlike most gay dramas, which immediately lead to sex, this is more a movie about intimacy, pain and the healing power of love. A big hit at Sundance filled with tenderness and beauty.

Bald-headed Billy “Titanic” Zane is cheating on girlfriend AnnaLynne “Holy Shit!” McCord with “Spartacus” diva Viva Bianca. Of course, Billy is a good two decades older than either of these two hotties, so this must clearly be an adult male fantasy, right? Well, it is for a while, then McCord learns the truth and arranges a weekend getaway from hell for the three of them. The rest of the flick is pure twisted eye candy with sexy lingerie, flashes of nudity, weird role-playing, bondage bathing, and all the other things we all do on weekends.

THE SONG WITHIN: SEDONA

Filmmaker Kathy Douglas believes that wisdom, like cat hair, is everywhere. It can be found in trees, rocks, art, spiritualism and especially in the pronounced sensitivity of women. Here she introduces us to 16 of them, sisters of a sort who have all fallen under the spell of hypnotically beautiful Sedona, Ariz. They each share their stories of being drawn inexplicably to this one place, and how it has changed their lives. New-agey as hell, but you can’t deny the beauty in their eyes and the power of their voices. (And trust us: If you’ve never been to Sedona, make sure your next vacation passes through there.)