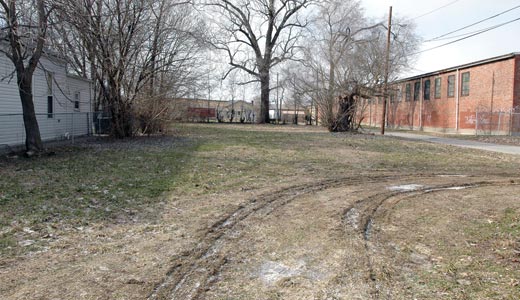 In St. Louis, a surplus cargo container on a vacant lot will soon act as a small business incubator for local restaurateurs. On site, produce will be grown. Elsewhere in the city, another vacant lot will be developed into a sunflower garden that will improve soil quality and produce marketable goods like flowers, seeds and biodiesel.

These were two of the winning ideas from a competition held by the city of St. Louis last year for sustainable redevelopment ideas that utilized a city-owned vacant lot.

Pretty nifty? Louisville Metro officials thought so. Inspired by the competition and others similar to it, Mayor Greg Fischer yesterday announced the city is hosting its own vacant lot redevelopment competition called “Lots of Possibility.”

They are calling on community-oriented individuals and groups to submit specific project ideas to repurpose one of the 262 eligible vacant lots owned by the city. Individuals or groups will submit preliminary proposals, which must identify the specific lot they would utilize, how they would implement their project, and who would be responsible for it. Ideas can involve long-term residential or commercial use and require construction, or they can be creative short, interim uses of the space. An independent group of judges will select up to 12 finalists, who will then be given an additional month to fully flesh out their ideas and present them to the judges. From these, a total of four winners will be selected — two from the long-term proposals and two from the temporary group.

Winners in the former category will be awarded up to $15,000 each in seed money and the title to the vacant lot they have identified for their project. Winners in the latter will receive up to $4,000 to implement their project and a one-year land lease, which will be renewable for an additional year. An undisclosed community foundation is providing the seed money.

“We’re really hoping to see an array of proposals. We want innovative ideas. If people want to do something bigger, stranger … We want those big ideas,” says Curtis Stauffer, grants coordinator for Louisville Metro’s Department of Community Services and Revitalization.

The goal is threefold. First, get the community to start thinking about vacant properties as neighborhood assets that can become a community resource rather than an illegal dump site or an unsightly, unused annoyance. Second, identify uses for vacant lots that can be replicated elsewhere. Third, highlight the difference between the properties local government owns and those it does not.

Of the more than 6,000 vacant and abandoned properties strewn across the city, only 430 are actually owned by Louisville Metro. The clear majority are owned by private parties — i.e., owners who’ve backed away for whatever reason, and banks that own them but don’t have incentive or systems to physically keep up the property — and they have fallen into Metro management because, at the end of the day, somebody has to make sure the grass in the front yard doesn’t reach the roof and that any structures on the property don’t pose health threats to nearby residents.

It’s a distinction many, particularly the responsible home or business owners with the misfortune of existing next to a blighted property, fail to recognize. Yet, it matters. A lot. Ownership makes upkeep easier for the already overburdened caseworkers and maintenance crews. It also means city officials can sell the property, or in the case of the contest, give it away.

While under Metro ownership, the properties might as well be black holes for city money and resources. Breaking even is often impossible, given demolition and yard maintenance cost on one end and already low-property value assessments in low-income neighborhoods on the other. But getting the properties into the hands of new owners means the responsibilities for upkeep fall onto somebody else, and, more importantly, the properties can be taxed again.

Last year, Metro freed itself of 35 of its vacant properties. Land bank administrator Paul Mastrolia says they’d love to increase those numbers, but whether they can depends entirely on outside interest. As a primary rule, Metro won’t sell to somebody who’s merely trying to rack up low-cost properties and sit on them. They want active use that’s good for the community at large.

“The goal is always to get the property into the best use possible,” he explains, “so we don’t sell them to everyone.”

Here’s where that last goal of Lots of Possibility comes in. If more imaginations are sparked into thinking about what vacant properties might become, maybe more people will be inclined to check out Metro’s inventory of properties and negotiate a price with them. Or, maybe they’ll reach out about partnership possibilities outside of the official contest. Already, Metro has successfully worked with local nonprofits to establish community gardens on vacant lots.

Adds Stauffer, “We really hope to better address the vacant and abandoned property issue. We’re hoping to get a strong response from people who really care.”

The contest won’t fix everything, of course. Lots of Possibility is just one piece of the complex puzzle. Metro is still forging on with its foreclosure pilot program, under which it initiates foreclosure action on properties that have accumulated municipal liens. That program launched in early fall. As of Nov. 1, foreclosures had been initiated on 11 properties.

Meanwhile, officials are developing a legislative package for the 2014 General Assembly to consider. It is expected to include, among other things, changes that would make it easier and cheaper for the city to pursue spot condemnation (a type of eminent domain) of blighted properties and restricting the sale of delinquent property taxes on vacant, abandoned, blighted or otherwise distressed properties.

For more details on Lots of Possibility or vacant and abandoned properties, visit vapstat.louisvilleky.gov