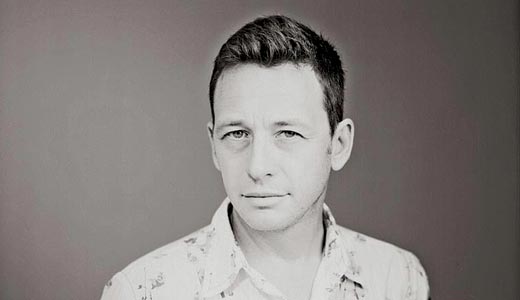 The summer of 2011 saw a lot of Kentucky in the news, not for basketball or thoroughbreds but for a string of scandals that made up what Appalachian novelist Silas House calls the “summer of hate.” In his play “This is My Heart for You,” the writer delves deep into issues of homosexuality and harassment in small-town American in this intimate story, which has been praised for its honest and well-balanced approach to religious fervor and gay rights. House chatted with LEO this week about writing for the stage and what the national media gets wrong about eastern Kentucky.

LEO: What was the writing process like for this show? Do you approach a project like this the same way you would one of your novels?
Silas House: Writing a play is more akin to writing poetry than a novel for me. It’s a whole different ballgame, one that is all about dialogue and economy. Since the show is so political in nature, the main goal I had was to make it as personal and human as possible. I also want to put poetry in the mouths of my characters that sounds realistic and conversational. That’s a hard balance for a contemporary play, because these are not lyrical times. But I hope I managed to do that.

LEO: What is it about theater or live performance that lends itself to this story?
SH: Any time you’re dealing with a social justice movement, words and music are going to be at the forefront of the fight. So this story relies a lot on music and dance and poetry to get the message of the people across. For me, the best thing about writing a play is that I create the characters and write the words, and then surrender to the director and actors to find — and deliver — the nuances and emotion. Every production and every actor brings something new and exciting to the play for me.

LEO: What do you hope people come away with from this show?
SH: I want people to think about the complexity of the issue. In the play, I had to work the hardest on the lines of the characters with whom I disagreed to make sure they did not become caricatures or comic relief. My goal is to show people who all believe deeply in something. I want all of them to have a voice, but I want the ultimate message to be that we must accept one another and talk to each other with respect and without vitriol. To my thinking, this is not so much a “gay play” as it is a commentary on how Americans have lost the ability to have a civil conversation with one another about political and social issues.

LEO: What do you think is the most common misconception people have about Appalachia?
SH: That Appalachians are stupid. The media constantly perpetuates this idea that rural people are all ignorant and closed-minded. That’s why in the play you have rural people who are at very different levels of education and intelligence, just like anywhere else. Appalachia has always been a microcosm for America. The reason people fear Appalachia is that it reveals in blatant terms what is the best, and worst, about us as a country.

LEO: Your work has been praised for its honest, insider’s approach. What do you think makes this piece successful?
SH: In my work, I strive to be honest about what is good and bad about Appalachia. The major mistake non-natives make about Appalachia is either vilifying it or romanticizing it. To me, it’s just as insulting to see a novel or movie about the region that portrays it as perfect as it is to see a piece of art that shows it as totally bad. Complexity shines a light on the truth.

LEO: Do you think Appalachia is making strides toward greater tolerance? Can you see a day coming when people wouldn’t be discriminated against because of their sexual orientation?
SH: I have definitely seen strides toward better acceptance. It’s about exposure and education, and I think that’s one thing the play does: expose audiences to Appalachian characters in a new way, showing them as thinking, evolving people. I don’t know if we will ever come to a place as humans who do not fear or hate those who are different from us, but I know the world is better today for lots of people than it was 50, 25 or even 10 years ago. So change is happening.