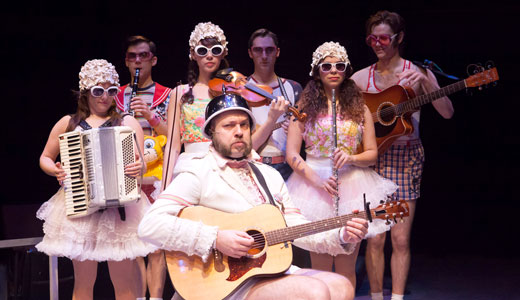 ‘Pirates of Penzance’
Performed by The Hypocrites. Directed by Sean Graney. Continues through Feb. 4 in the Bingham Theatre at Actors Theatre of Louisville, 316 W. Main St. For tickets or info, call 584-1205 or go to actorstheatre.org.

Even in a conventional production under a proscenium arch, Gilbert and Sullivan’s comic opera “Pirates of Penzance” is a giddy pleasure that’s been wowing audiences since it premiered in New York City (yes, it premiered in the U.S., not in Britain) to wildly enthusiastic audiences in 1879.

Those Americans might have loved the way the play lampooned the deliciously stuffy pomp and pretense of an empire on which the sun never set — but Brits loved it as well, and for the rest of the 19th century “PoP” was the phenomenon of the age — repeatedly revived and staged by professional and amateur groups (including a production by an African-American troupe in Washington, D.C., that earned a rave review in The New York Times).

My guess is that no previous production matches the exuberant, no-holds-barred fun of the production now playing at Actors Theatre as part of the Brown-Forman Series. “Reimagined by The Hypocrites,” a Chicago-based troupe, says the program. And “adapted and directed by Sean Graney,” one of the company’s founders, with other creative credits going to co-director Thrisa Hodits and co-adapter Kevin O’Donnell.

Reimagined indeed! This is one of those shows that reminds us why a theatrical production is called a “play.” Scenic designer Tom Burch supplies the set with beach balls (beforehand), promenade seating that brings some members of the audience right into the action (and some players into the audience) and a plastic swimming pool. Alison Siple’s costumes might have shocked (and delighted) a prim Victorian audience, and Andra Velis Simon’s brilliant adaptation of the score for guitars, ukes, clarinets, squeezeboxes and a host of other instruments sounds like a late-night folk festival jam session — while highlighting the enormous and varied talent on and around the stage.

And the talent — both musical and comedic — is staggering. These folks sprint and march all over the stage with fearless, swashbuckling abandon and perfect comic timing (I’ll never hear the word “duty” again without snickering). All the while playing and singing in the best spirit of the sparkling score.

There is a plot: Young Frederic (Zeke Sulkes) has just reached his 21st year and is due to be freed from accidental indentured servitude as a pirate (he was supposed to be indentured to a pilot). Once free, he’ll part company with a band led by the Pirate King (Robert McLean, with minions: Ryan Bourque, Doug Pawlik, Shawn Pfautsch). But Frederic may keep company with the only woman he’s ever seen, the much older Ruth, who assures him that she is a paragon of feminine beauty (played by the marvelous Christine Stulik in a bravura dual role that makes use of her spectacular voice and presence).

Well, it seems he’ll keep company with her unless it turns out that other women are, in fact, more beautiful. And at that moment, a group of comely and provocatively saucy young women show up (Emily Casey, Dana Omar, Becky Poole). It turns out they’re the daughters of the very model of a modern major-general (Matt Kahler, and in gleaming headgear).

Romance, complications and duty create a whirlwind of comic complications (and more than a few sweet moments). And at the end, you’ll walk out of the theater refreshed and renewed.