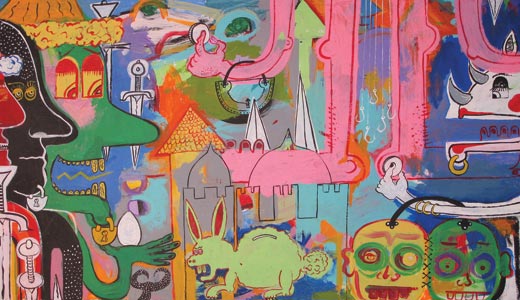 We talk about Miley too much. How about we focus on smart people and important stuff instead? Let’s start with “Inspired Science,” the current exhibit at the main library downtown. It focuses on five dudes who easily would have topped People’s Sexiest Men of the Year list, if by sexiest you mean pioneers of our understanding of modern science. Johannes Kepler (astronomy), Isaac Newton (physics), Robert Boyle (chemistry), Robert Hooke (microscopy) and Andreas Vesalius (anatomy) are the focuses of the exhibit, which is a combination of information on their accomplishments and personal lives, reproductions of their scientific art and drawings, and original printings of their books. Whether you want to learn something new, or just grow your appreciation for the sciences, the gallery is a refreshing change of pace from twerking and the mindless cultural maladies that consume our lives. —April Corbin

If you want to have the most fun you can have this month, head over to a whorehouse. If that’s not possible for whatever financial, logistical or moral reason, head over to the Jewish Community Center instead for CenterStage’s latest production: “The Best Little Whorehouse in Texas.” It’s a lighthearted tale about buying tail: A crusading do-gooder wants to shut down a legendary brothel called the Chicken Ranch, the local sheriff and devoted patrons fight back, hilarity and a happy ending follow. Expect a lot of boot-stomping in this high-energy musical. This is the fourth offering in CenterStage’s solid season, which has included sold-out “Les Miserables” and “Legally Blonde.” —April Corbin

‘The Pirates of Penzance’

Calling all models of modern Major Generals: Actors Theatre presents the rip-roaring, swashbuckling, indubitably charming comic opera known as “The Pirates of Penzance.” This is no stuffy affair but a reimagining of the Gilbert and Sullivan classic, given an irreverent twist by Chicago theater rebels The Hypocrites. Beach balls and banjos abound in this hilarious romp of a show, which includes audience sing-alongs, nautical romance and other adventures on the high seas. The Hypocrites have garnered a national following for their reinterpretation of classical theater, breathing new life into obscure or overlooked texts. Gilbert and Sullivan doesn’t exactly fall into the forgotten category — shows from “The West Wing” to “Doctor Who” to “Saturday Night Live” have parodied or referenced the comic opera — but rest assured that this production has come a long way from the show’s 1879 beginnings. —Jennifer Harlan

The newly established Vault 1031, housed in the Old Louisville warehouse of the Old Armored Car Company, is another indicator of the evolving developments downtown. It’s a trilateral venue: a coffee joint, gallery space and 130-capacity theater rolled into one. “Sex Again,” a full-length dramedy written by local playwright Heidi Saunders, is its first production of many to come. The story is a racy one, centered on a man and woman who want to step down from a plateau of sexless marriage. On the less racy side, her beloved Regency romance novels somehow take on a life of their own, and the couple’s marriage is tested in ways both empathetic and surreal. —Lara Kinne

As founder and editor of New Southerner, originally a quarterly magazine, Bobbi Buchanan published short essays on eating organic, caring for the environment, raising a family, and transitioning from big-box stores to locally owned businesses. New Southerner is now an online publication and Buchanan has moved on to other projects, like her new book “Listen: Essays on Living the Good Life.” Conversational and amusing, these insights into a fellow Kentuckian’s effort to live right — and enjoy living — range in length from one to a few pages. Buchanan will be at Carmichael’s to discuss the book, a collection of works culled from her years as a columnist. —Mali Anderson

Four of Louisville’s finest perform as a benefit for the Silver Linings Arts Contest, an organization assisting people dealing with mental illness through art, music and writing. Second Story Man returns to the stage to headline the event. Having recently undergone a lineup shift, expect SSM to offer up something different from their previous indie pop, now with an emphasis as reliant on angular dynamics as vocal interplay. Also playing are the fuzzed-out guitar heroics of Trophy Wives and the melodic punk of Frontier(s), both of whom ought to make for an appropriate accompaniment to SSM’s new approach. Thaniel Ion Lee and Solar Warden open; given Lee’s predilection for exploring interesting sounds, he stands to provide a different perspective here. The show will start at 8:15. —Syd Bishop

If you’re fancying a night out on the town, I bet it’s going to include dancing, drinking and dishing the dirt with your friends. What if you could do all of that and make the world a better place? You can on Saturday, suckers. The 21st annual Cabo Wabo Coat Party wants you to shuffle into the Mellwood Arts & Entertainment Center to party down. There’ll be drinking and dancing to the sounds of The Crashers and From Paris all night long. And the best part — all proceeds go to the Dream Factory of Louisville, which helps grant wishes of chronically ill children. It’s also suggested you bring a new or gently used coat to benefit St. Vincent De Paul. That’s a lot of good karma floating around. I suggest you take advantage of it to start the new year off on the right foot. —Sara Havens

In our newest modern era, where musicians must keep surprising their fans in order to stand out in an overflowing marketplace, dance-rockers The Pass have come up with a fun idea. They are releasing four 7” singles, one each month between now and April … and, they’re playing monthly shows at Zanzabar with rotating guests, celebrating the releases and making some fresh money each time. Hip-hop group Skyscraper Stereo is their official supporting act this time, with “some very special surprise guests” also teased (is it Jennifer Lawrence?! We love her!). Each 7” will have different colored vinyl, and the eight songs might end up on this summer’s full-length album. After the show, Glitter Titz DJz keep the party going, for those looking to lose weight this month by dancing. —Peter Berkowitz

New Albany celebrated its 200th anniversary in 2013. Some of the art created for the bicentennial remains on view at the Carnegie Center for a few more days. "Of Place” features work by New Albany residents Tiffany Carbonneau and David Modica. Carbonneau’s videos include scenes from China, Thailand, Poland, South Africa and Panama. Coupled with footage from the Ohio and Mississippi rivers, her goal is to illustrate how this locality is similar to that of other river communities around the globe. “New Albany is experiencing a revival right in the heart of the city,” says Modica. His photographs “represent everyday life … from the perspective of someone who grew up here. (They) examine both the established and the new cultures and the melding of the two into one new place.” —Jo Anne Triplett

Modern Cult opened a few months ago to sell, promote and otherwise discuss facets of underground culture that don’t receive much attention, even at other local shops. As a person who has an entry on the “History” section of LouisvilleHardcore.com, Mike Harpring is just the kind of artist whose perspective and aesthetic fits the walls of such an unconventional gallery. A veteran of the fondly remembered band Bodyhammer and a fixture of the BRYCC House back when, Harpring went on to study printmaking at Indiana University. His current show is “an exhibition of recent illuminated assemblages, documenting transition, resilience and moving forward.” The pieces combine printmaking and assemblage with illuminated laser-etched acrylic panels, he says, providing yet another reason to stop by one of Louisville’s numerous vital record stores. —Peter Berkowitz

Sean Garrison needs no introduction. The Artist Formerly Known As Rat, of Kinghorse infamy, has been better known in recent years as one of the most dynamic, striking artists around, and this solo show, “The Fruits of Rashness,” at Craft(s) is long overdue. In 2010, curator and fellow artist Bruce Linn wrote, “His bitingly satiric works play with emblematic and iconic imagery from a variety of cultures and historic periods, including our own popular culture. Each is thrown into the fierce blender of his temperament and comes out startling, absurd and fresh.” StudioWorks director Al Gorman adds, “Garrison’s art is enigmatic, humorous, well-composed, and he possesses a passionate sense for color.” And Garrison? He says, “I paint pictures for the same reason I watch cartoons — it makes me laugh.” —Peter Berkowitz

‘Capturing a Moment in Time’

The land and the weather like to flirt with each other. As city dwellers, we don’t pay a lot of attention to this courtship unless we need an umbrella or jacket as we head outdoors. That is, until the rain stops, the air is fresh and the grass is greener than it was 15 minutes ago. That’s when we stop and stare at the sky, the trees, the landscape. That’s the world the Kentucky Plein Air Artists inhabit. Their latest exhibition, "Capturing a Moment in Time,” gives viewers a chance to pause in an outdoor scene that was, for a brief time, the artist’s reality. Owner Jane Morgan says the show is ongoing; when a painting is sold, another one by the group takes its place. Almost like nature itself. —Jo Anne Triplett